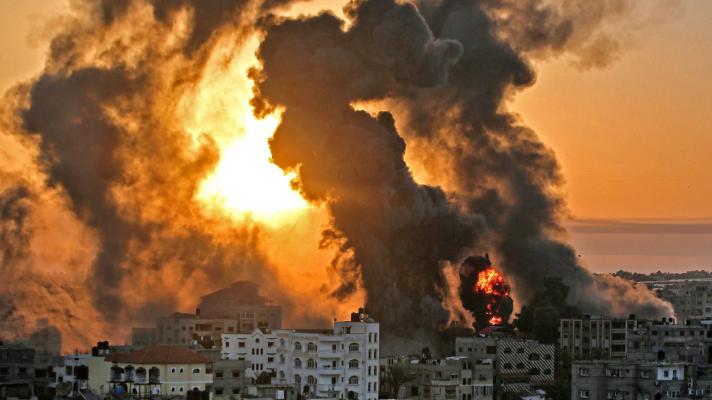 A fire breaks out at dawn in Khan Yunis after an Israeli airstrike on targets in the southern Gaza Strip, May 12, 2021 (Photo: Youssef Massoud / AFP)

With its different factions, Gaza collectively enshrined the state of consciousness of all of Palestine and achieved its goal of breaking Israel’s prestige, despite Prime Minister Benjamin Netanyahu’s claim that the country had become “a superpower, not just a regional power.” This new Palestinian awareness was achieved in the wake of the escalation and aggressive Israeli campaign against the Sheikh Jarrah neighborhood, inhabited by more than 38 Palestinian families threatened with eviction from their homes. Israel also savagely attacked protesters and worshippers at the Al-Aqsa Mosque.

The fate of the Sheikh Jarrah neighborhood has become an international issue raising global awareness and solidarity with the oppressed Palestinians. The Palestinian cause had been absent from the international scene following the normalizations of Arab and Islamic countries after Donald Trump offered all of Jerusalem to Israel.

However, the battle in Gaza is not expected to end any time soon, because Israel will try to restore the deterrent power it has lost due to Palestinian missiles successfully fired from Gaza. A noteworthy fact is the 1948 Arab uprising. After 72 years of coexistence, in the city of Lod in particular and in other mixed Arab-Israeli cities, they have shown that the new generation wants its occupied territory back, rejecting the unsuccessful Oslo and Camp David agreements.The turn of events is not only generated from the field: Gaza rockets burn the ground under the feet of Palestinian President Mahmoud Abbas. Abbas delayed parliamentary and presidential elections that would inevitably lead to the loss of the presidency he has held since 2005. Of course, Israel believes that the current Palestinian president is its best partner, because he has rejected armed resistance. Moreover, Abbas maintains security cooperation with Israel and avoids any possibility of Palestinians living in the West Bank joining Gaza to confront both Israeli aggression and expansion.

It is plausible that Israel also acted in its own self-interest by disrupting the Palestinian presidential elections that coincided with the illegal eviction of families from Sheikh Jarrah, with the aim of preventing Palestinians in Jerusalem from participating in the polls. Israeli Prime Minister Benyamin Netanyahu is no doubt aware that attacking al-Aqsa and Jerusalemites is like lighting the fuse of a powder keg. The first and second intifadas were the best proof that such acts have consequences.

Hamas, Islamic Jihad and all other factions in the Gaza Strip have achieved unity with Jerusalem by defending it. Hamas did not start shelling Israeli settlements before giving Israel many hours to stop attacking the civilian population of Jerusalem. However, Tel Aviv insisted on its position and dragged everyone into the battle for Benjamin Netanyahu to achieve his goals of postponing Israeli elections, thus saving his political future for the time being. Palestinian groups in Gaza shelled Jerusalem, Tel Aviv, Ashkelon and Ashdod with hundreds of rockets, which landed not far from Haifa. Israeli officials did not anticipate the intensity of the Palestinian rocket response or the reaction to the Gaza shelling. The various resistance groups proved their credibility with time and intimidation. They gained increased popularity among the Palestinian and Arab population who supported the cause and were against normalization with Israel.

One of the most important goals the Palestinians have achieved has been to demonstrate the failure of the Iron Dome system to intercept all the cheap rockets – domestically made – that were launched into Israeli areas. Gaza overwhelmed the sophisticated Israeli interception systems by launching more than 100 rockets simultaneously. Israel admitted that it was unable to stop the rocket fire despite the Israeli army shelling dozens of targets. To intimidate the population, Israel bombed several civilian towers (al-Hanadi, al-Jawhara and al-Shorooq) in prestigious commercial and residential areas with the intention of turning the inhabitants against Palestinian groups confronting Israel.

So far, at least 60 Palestinians have been killed and 6 Israelis, including a serviceman, have been killed in the exchange of shelling. Palestinian groups managed to launch more than 1,300 rockets. Shameful scenes appeared of members of the Israeli Knesset and Defense Minister Gantz fleeing to bomb shelters.

Israel has not only lost its deterrence capability, but also its prestige. In the 1940s, a Jewish terrorist group attacked British forces and blew up the King David Hotel in 1946, killing 91 people. The Irgun group claimed responsibility for the bombing, which killed British officials of the British Empire, which ruled Palestine at the time. David Ben Gurion, the founder of the so-called State of Israel, was asked at the time, “Will the Haganah gangs defeat Britain with this bombing?” He replied, “The aim is to break the prestige of the British Empire.” Now, Gaza has shattered the prestige of the Israeli myth. 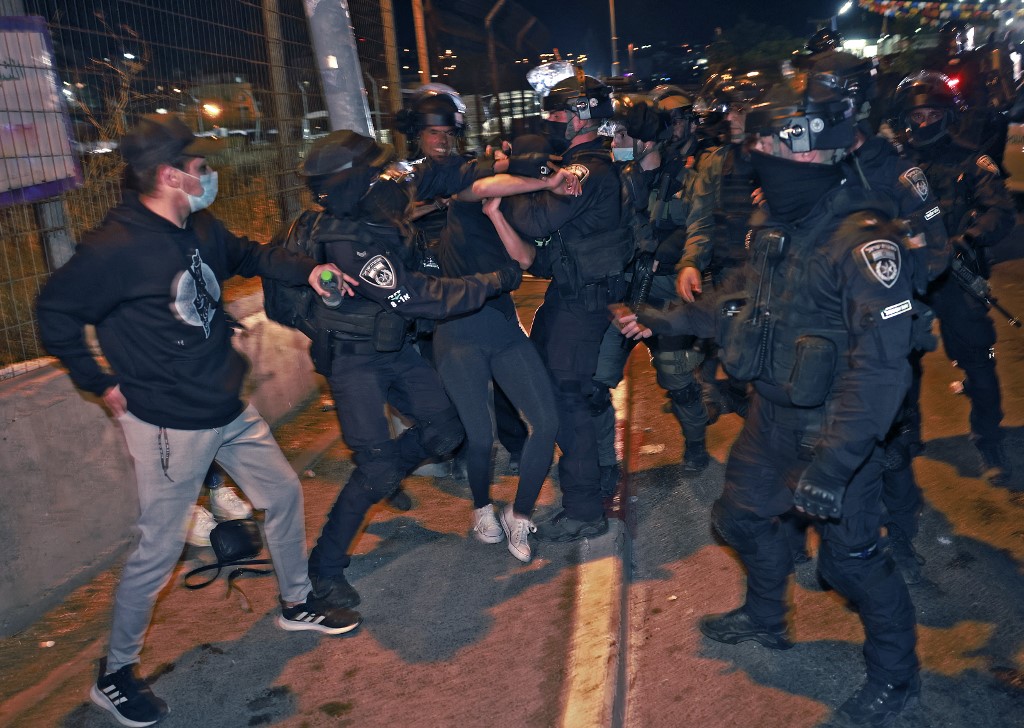 Israeli policemen crack down on demonstrators protesting the eviction of local Palestinian families in the Sheikh Jarrah neighborhood of East Jerusalem, May 8, 2021 (Photo: Menahem Kahana / AFP).

The history of the Sheikh Jarrah neighborhood:

Following the expulsion of Palestinians in 1948, known as the “Nakba”, some 750,000 Palestinians were forced to flee their homes to neighboring countries. Following these events, 28 families (today numbering 38) settled in the East Jerusalem neighborhood of Sheikh Jarrah in 1956. They reached an agreement with the Jordanian Ministry of Construction and Development and the UN refugee agency (UNRWA) to provide them with housing in the Sheikh Jarrah neighborhood. At that time, the West Bank was under Jordanian rule (1951-1967).

The Jordanian government provided the land, while UNRWA covered the cost of building 28 houses for these families. It was agreed that the residents would pay a token fee, provided that ownership was transferred to the residents more than three years after the completion of construction. However, this was interrupted by the Israeli occupation of the West Bank, including Jerusalem, in 1967, which prevented the registration of the houses in the families’ names.

This month, Jordan’s Foreign Ministry said it had provided the Palestinian Foreign Ministry with 14 ratified agreements intended for residents of the East Jerusalem neighborhood of Sheikh Jarrah that support their claim to their land and property. In a statement, the Ministry said it provided the residents with a certificate proving that the Jordanian Ministry of Construction and Development had agreed with UNRWA to establish 28 housing units in Sheikh Jarrah to be delegated and registered in the name of these families. The process, however, was interrupted as a result of the Israeli occupation of the West Bank in 1967. The Ministry had previously provided the Palestinian side with all documents that could help the Jerusalemites maintain their full rights, including lease contracts, lists of names of beneficiaries and a copy of the agreement concluded with UNRWA in 1954.

In 1972, the Sephardi Committee and the Israel Knesset Committee claimed that they owned the land on which the houses were built in 1885, and asked the court to evict four families from their homes in the neighborhood, accusing them of land grabbing.

In 1997, Suleiman Darwish Hijazi, a resident, filed a lawsuit in the Israeli Central Court to prove ownership of his land, using title deeds issued by the Ottoman Empire, brought from Turkey. However, the court rejected the claim in 2005.The court said the documents did not prove ownership of his land, and Hijazi’s appeal filed the following year was also rejected. In November 2008, the al-Kurd family was evicted from their home, followed by the eviction of the Hanoun and al-Ghawi families in August 2009.

In 1948, Al-Sabbagh’s family already fled their home in Jaffa, which is now inhabited by Israelis. Al-Sabbagh, a family of 32, including ten children, fears that the court verdict will make him and his family refugees again.