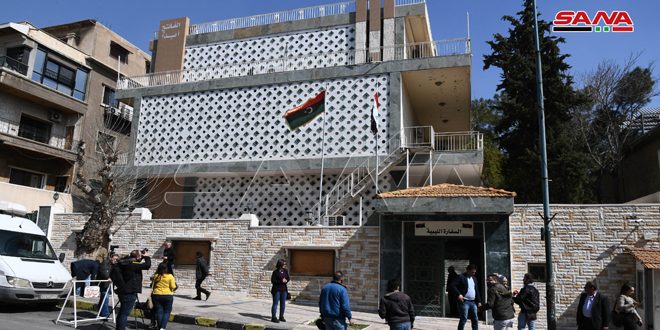 The Libyan Embassy in Damascus was reopened on Tuesday, signaling the return of diplomatic representation between the two brotherly countries.

In a statement during the opening, Deputy Foreign and Expatiates Minister Fayssal Mikdad asserted that Syria has made a crucial decision to restore relations with the brothers in Libya because the battle in the two countries is the same as they both confront terrorism and the states that back it.

Mikdad added that Syria is open to cooperation and there can be no joint Arab action without it, expressing his hope to reopen the Syrian Embassy in Tripoli soon after its liberation by the Libyan army.

He added that the Libyan diplomatic representation will be at the highest levels in Syria, as a Libyan Ambassador to Syria will be appointed in the near future, clarifying that this step will be followed by other steps regarding the alliance between the two countries against terrorism.

On Sunday, a memo of understanding was signed between the Syrian Foreign and Expatriates Ministry and the Libyan Ministry of Foreign Affairs and International Cooperation on reopening the headquarters of the diplomatic missions and the consulate and coordinating stances between the two countries at the international and regional forums, particularly in facing the Turkish intervention and aggression on the two countries.