The US and its allies are involved in a collective act of brinkmanship by simultaneously ramping up tensions over Idlib and the Persian Gulf trying to force Damascus, Tehran, and Moscow into making concessions, say political analysts of Syrian origin.

The UN and US have stepped up criticism of Damascus and Moscow over the worsening humanitarian situation in Idlib and accused them of “indiscriminative” air strikes, something that Russia and Syria resolutely denied.

“I am shocked and appalled by reports of an incident yesterday in which a female patient and three paramedic staff were killed when the ambulance they were travelling in to Maarat Al Numan main hospital, in Idlib, was hit by a strike”, Moumtzis stated.

Earlier, on 18 June United Nations Emergency Relief Coordinator Mark Lowcock told the UN Security Council that “over the last six weeks, the conduct of hostilities has resulted in more than 230 civilian deaths including 69 women and 81 children”, adding that an estimated 330,000 people had fled their homes since 1 May.

Referring to reported attacks on Idlib medical facilities and schools, Lowcock pointed the finger at the Syrian government and Russia, claiming that “some have drawn the conclusion that hospital bombings are a deliberate tactic aimed at terrorising people”.

Moscow and Damascus have rejected the allegations, stressing that they were fighting against the UN-designated terrorist group Hayat Tahrir Al Sham*.

For his part, Syrian UN Ambassador Bashar Ja’afari emphasised that “Syrians and allies do not target schools or hospitals”.

US President Donald Trump previously claimed that Russia, Syria, and Iran were “bombing the hell out of Idlib Province in Syria”.

​According to Christopher Assad, a Canada-based political analyst of Syrian origin, the US and its allies in the UN are deliberately increasing pressure on Russia, Iran and the Syrian government to force them “to re-consider their resolve to eradicate the terrorist organisation(s) in Idlib”.

“These pressure tactics run contrary to UNSC resolutions”, Assad underscored, stressing that some of Idlib’s civilian targets are now infested with Islamic terrorists who are routinely using ordinary people as human shields.

“I anticipate the military campaign against terrorists in Idlib to bear fruit sooner rather than later”, he stressed.

For his part, Ghassan Kadi, a political commentator and analyst of Syrian descent, noted that Lowcock’s rhetoric “seems to echo the words of the NATO camp, again without any substantiated evidence, and this is not a surprise”.

While raising accusations against Russia and the Syrian government, the US and its allies have seemingly overlooked the increase in activity of Idlib-based extremists over the past few months, outlined by Syria’s ambassador to the United Nations Dr Bashar Jaafari during his 18 June speech at the UN Security Council.

Dr Jaafari drew attention to the growing number of artillery attacks by Idlib-based terrorists on neighbouring towns and villages of Aleppo, Northern Hama, and the northern Latakia countryside in May 2019. He also highlighted ongoing attacks on “the positions of the Syrian Arab Army (SAA) and the locations of the allied Russian forces, especially the Hmeymim Airport, with rockets and booby-trapped drones”.

Idlib Province is home to various jihadi groups with around 30,000 militants operating in the area, including the Turkey-backed National Front for Liberation (Jabhat al-Wataniya lil-Tahrir) and Hayat Tahrir Al Sham*, an umbrella terrorist organisation led by the al-Nusra Front*.

“Russia is adamant to bring to an end to the war in Syria, but it has to juggle its way into a final resolution very strategically”, Ghassan Kadi opined.

“After all, Russia’s regional interests are not restricted to Syria, but they include Turkey and Israel. Out of the two, Turkey is the closer big neighbour that holds the key to free navigation in the Sea of Marmara. Among other things President Putin does not want a return to the feuding days between Imperial Russia and Ottoman Turkey. Russia must have good relationships with Turkey, and Arab supporters of Russia ought to understand and accept this”, he said. 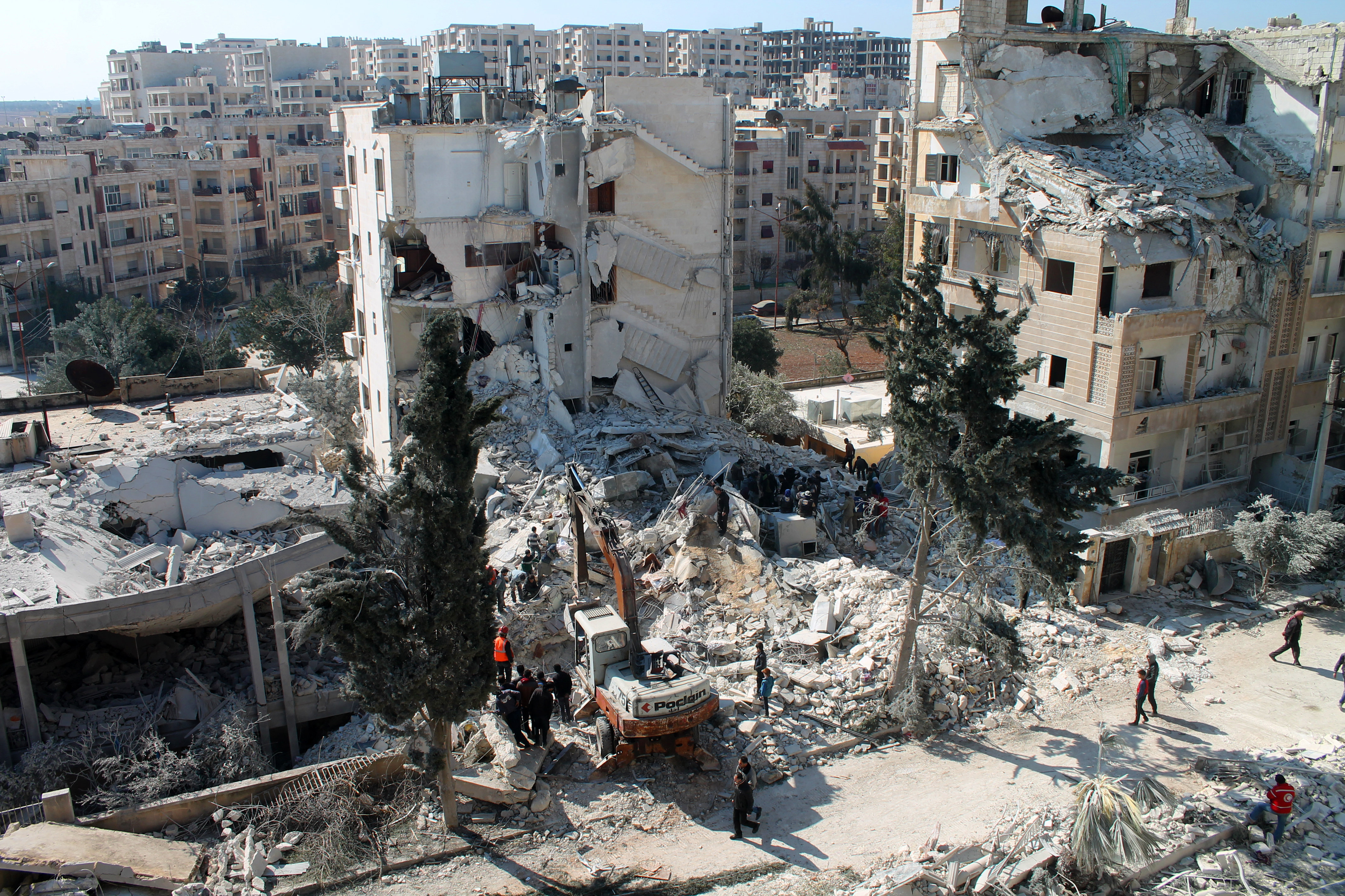 While Turkey is maintaining control in the Idlib region, it will have to eventually withdraw from the area and pass the baton to Damascus, the analyst highlighted.

In the summer of 2018, Moscow, Damascus, and Tehran discussed the necessity of an Idlib operation to nix the last terrorist stronghold in Syria. However, Ankara vociferously resisted the potential advance, citing the possibility of a new refugee crisis.

As a result, the Idlib ceasefire regime was brokered by Russia and Turkey on 17 September 2018 within the framework of the trilateral Astana format and was re-affirmed in mid-May 2019 amid an escalation of hostilities in the region.

Still, as Nebenzia pointed out addressing the UN Security Council on 18 June, “like other territories of the Syrian Arab Republic [Idlib] should return to the control of the Syrian government and the terrorists have to be liquidated”.

Who Blinks First? Idlib and Persian Gulf in Focus of World’s Attention

Meanwhile, on 22 May, the US government claimed that “it had seen signs the Syrian government may again be using chemical weapons” in Idlib to facilitate the recapture of the last jihadi-held stronghold. Washington warned that it would respond “quickly and appropriately” if the claims are proven. As of yet no evidence backing the claims has surfaced.

Earlier on 21 May, the head of the Russian centre for Syrian reconciliation, Maj. Gen. Viktor Kupchishin warned in a daily briefing that terrorists were planning chemical attacks in the Idlib de-escalation zone.

Kadi agreed that the situation bore a strong resemblance to the Khan Shaykhun and Douma chemical incidents, which took place on 4 April 2017 and 7 April 2018, respectively. The episodes were hastily blamed on Damascus by the Trump administration which led to massive strikes by the US and its allies on Syrian government targets.

“What we are seeing now is a collective act of brinkmanship; not only in Syria, but also in the Persian Gulf. It is a game of ‘who blinks first’”, the political analyst opined, referring to the Gulf of Oman incidents occurring in May and June 2019 and groundlessly attributed to Iran by Washington.

An Iranian navy boat tries to stop the fire of an oil tanker after it was attacked in the Gulf of Oman, June 13, 2019

The US-Iran enmity is swiftly escalating. The Gulf of Oman incidents were followed by the downing of a US RQ-4 Global Hawk surveillance drone which, according to the Iranian leadership, was engaged in a spying operation near Kuhmobarak in the southern province of Hormozgan.

​Tehran’s move was dubbed by Trump “a very big mistake” while some American media outlets started speculating that the US president was about to authorise a strike on Iran but “abruptly pulled back”. However, in his next move Trump announced that he would impose new heavy sanctions on Iran specifically targeting the country’s Supreme Leader Ali Khamenei. In response, Tehran made it clear that US sanctions on Khamenei means “the permanent closure of the path of diplomacy”.

As tensions in the Middle East increase, it all depends on what side regional players, most notably Turkey, will take, Kadi believes.

“Recep Tayyip Erdogan must decide on which foot he wants to stand. After all, he is the NATO member who seems to be on better terms with Russia than he is with the US”, the political analyst said.