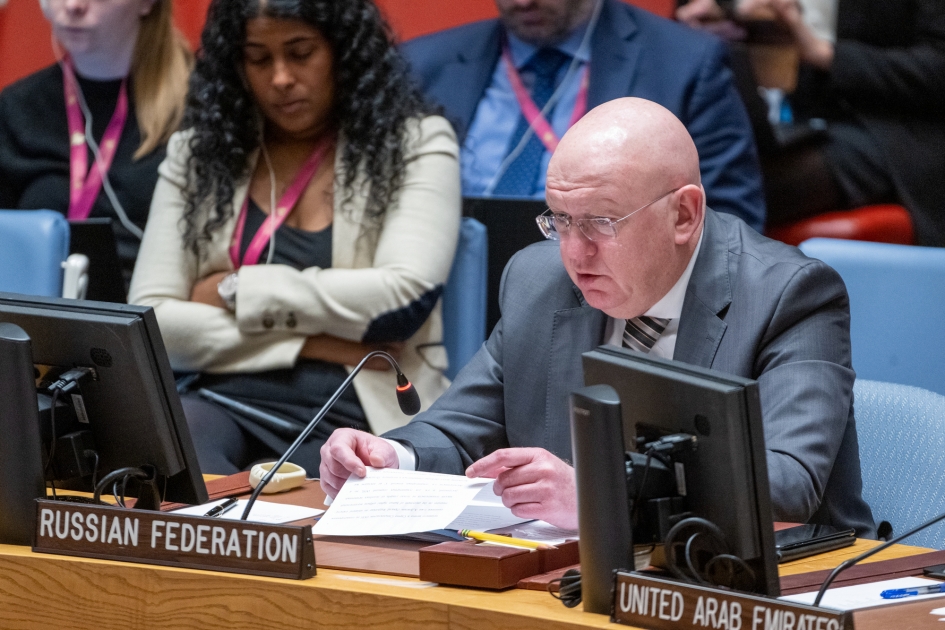 We thank Special Envoy for Syria G.Pedersen and USG for Humanitarian Affairs M.Griffiths for having briefed us on the political and humanitarian situation in the Syrian Arab Republic.

What we heard today confirms that the overall situation in Syria remains tense. Terrorist threats persist on the ground; northern, north-eastern, and southern regions of the country remain exposed to illegal foreign military presence while the humanitarian and socio-economic situation keeps deteriorating. Suffocating unilateral sanctions affect the situation in the most negative way. Their detrimental effect is further exacerbated by the pillaging of Syria’s natural resources and insufficient international assistance, first of all in the area of early recovery.

Against the backdrop of further military escalation, ISIL cells started to be more active at the northern borders of the country, first of all around Afrin. Terrorist activity also remains rather intense in the south of Syria, where fighters use the “security zone” which was arbitrarily established by Washington near Al-Tanf as a cover-up.

At the political track of the Syrian settlement, we always stand for promoting the Syrian-led and Syrian-owned political process to be conducted under UN assistance in the framework of UNSC resolution 2254. We note the efforts of G.Pedersen to recover and fine-tune the work of the Constitutional Committee. This being said, we proceed from the understanding that principled decisions regarding the modalities of further inter-Syrian dialogue in the Committee should be made by the Syrians themselves without external interference. In this regard, we welcome SESG’s contacts with Damascus and the opposition, which, unlike the “step-by-step initiative” is part of his mandate.

Together with our partners in the Astana format, Iran and Türkiye, we held the 19th International Meeting on Syria in Astana (22-23 November 2022). Upon its conclusion, a joint statement was adopted. We will further contribute to achieving lasting normalization in Syria.

Refugee camps Rukban and Al-Hol remain centers of extremism and illegal activities. In Al-Hol, attacks on its inhabitants occur routinely. The recent gruesome incident with decapitation of two girls is deeply shocking. Responsibility for all that is happening in the refugee camps fully rests with the state that occupies the cross-Euphrates area and Al-Tanf.  Washington should stop calling to uphold the international law, but rather take concrete measures that should make the US occupation forces in Syria contribute to this cause.

Achievement of lasting and reliable peace and security on the ground is only possible once Syria’s sovereignty and territorial integrity are recovered completely, and terrorist hotbeds (“Hayat Tahrir al-Sham” in Idlib, and ISIL in cross-Euphrates area) are eliminated.

Amidst these circumstances and the deteriorating humanitarian situation, Syrians have to struggle for survival – this fact was confirmed recently by a large-scale outbreak of cholera (and then hepatitis) that engulfed all Syrian provinces. The main reason for that was scarcity of drinking water due to the limited water supply from the Euphrates and devastation of the water and energy infrastructure.

Food shortages in Syria have set yet another anti-record, affecting 12 million people and putting further 2 million at risk.  The main problem here is unilateral sanctions against the backdrop of a critical lack of financing for the UN humanitarian response plan for Syria. Speaking of the response plan, Western donors make the most part of financing for early recovery projects go to the territories out of Damascus’ control, where less than one third of Syria’s population lives. At the same time, so-called “anti-terrorism campaigners” do not stop pillaging Syria’s natural resources. Last month alone, with the help of American military, more than 160 trucks carrying oil and wheat were dispatched from Syria to Iraq. However for the recent 10 years, the United Nations has been able to collect only half (at best) of the funds required for the implementation of the plan. This year again, only 44% has been collected by November.

We need to pay specific attention to the topic that our Western colleagues would rather evade. I mean the unilateral sanctions. During her recent visit to Syria, the UN Special Rapporteur on the impact of sanctions, Ms.A.Douhan, collected a considerable bulk of evidence demonstrating the damage inflicted by such unilateral restrictions i.a. on UN humanitarian operations, and also confirming the uselessness of so-called humanitarian exemptions. Everyone who is willing to can read her relevant report, which is accessible online. We believe that if Secretary-General’s December report on Syria makes no reference to the problem of sanctions and ways to address it, this will be a gross shortcoming on the part of the Secretariat. Besides, we request the reappointed UN Resident Coordinator in Damascus, Mr.Mostafa Benlamlih, to expedite efforts to issue a thematic survey on this matter, which we have been hearing of for the recent 12 months.

After the release of Secretary-General’s special report, we count on having the concluding round of the informal interactive dialogue, where we could hold a substantial discussion of the results of the work at the humanitarian track in Syria. We believe that during this discussion, we need to give a say to the new Head of the UN Office in Gaziantep J.Brady.

This is how we expect to receive information required in order to make a conscious decision regarding the future of UNSC resolution 2642. We hope that our colleagues in the Council will adopt an interested and constructive approach to this aspect.

#Nebenzia: We stand for promoting the #Syria|n-led & Syrian-owned political process to be conducted under 🇺🇳 assistance in the framework of resolution 2254. We note the efforts of SESG Pedersen to recover & fine-tune the work of the Constitutional Cttee.https://t.co/2rxy3mcZTX pic.twitter.com/LoIPrbX7t5