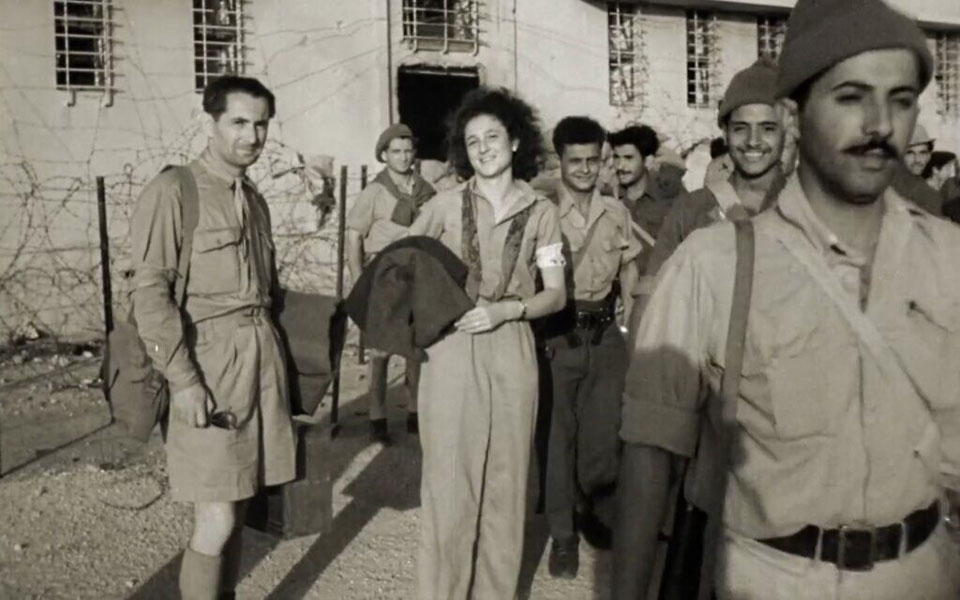 Footage of Israeli soldiers around the time of the 1948 War of Independence from the documentary film ‘Tantura.’

Writer/director Alon Schwartz’s Tantura is a brilliant, painful look at the massacre of a small Palestinian town in the path of invading forces claiming and cleansing the area for the new state of Israel in 1948. With new testimony, old film footage and copious documentation, the film reconstructs what actually happened when the Alexandroni Brigade of the Israeli Defense Force seized Tantura.

Schwartz also structures his work around a second tragedy. Though smaller in scale, what happened to graduate student Teddy Katz when he tried to bring the massacre to light is a tragedy in itself. The first casualty of war is always the truth.

Tantura was an old, modestly wealthy town at a strategic location on the Mediterranean coast. When the United Nations voted in 1948 to partition Palestine into separate Jewish and Arab states, Israeli forces invaded historically established Palestinian lands.

The story of Tantura sheds light on what occurred as the basis for the foundation of Israel. Hundreds of Palestinian towns were invaded, looted, raped and pillaged to make way for the new state. Israelis called this a “war of independence.” Arabs experienced it as Al Nakba (The Catastrophe). Over 750,000 Arabs were forced to move out their homes, from their lands.

History graduate student Teddy Katz had been interested in the events around the formation of the State of Israel. He spent over two years collecting data and interviewing 135 survivors of Tantura 1948, half Jews and half Arabs. He wrote up his findings and submitted it for his Master’s thesis. Katz work was quite good:  The paper was awarded a grade of 97.

As word of the paper spread among war veterans, the thesis was not as warmly received. It sparked an intense backlash. Veterans of the Alexandroni Brigade which had seized the territory and dealt with the local indigenous population were livid. They organized, retained a team of lawyers and sued Katz for defamation. The judge, Drora Pilpel of the Tel Aviv District Court, refused to listen to the testimony or consider the evidence Katz had collected.

Katz was overwhelmed. He received constant threats and hostility. He panicked under pressure, withdrawing and disclaiming his thesis. Within a few days, he realized his mistake and tried to have it reinstated, but he was not permitted. The bullying had worked. He suffered two strokes and a breakdown.

Yet the overwhelming truths remained. The interviews and data revealed a massacre where 270 Arab men were rounded up after they failed in their attempts to protect themselves from the better armed and organized Israelis. Platoon Leader Tovia Heller, head of the Alexandroni Veterans Association and many other veterans maintained their superiority, explaining how they suffered few battle casualties. They maintained that almost all the Palestinians were killed during battle, with few casualties after battle’s end. They blamed the Arabs for being an evil, cruel, vindictive enemy that brought on their gruesome fate by trying to defend their homeland.

These contentions did not stand up. Interview after interview of both Jews and Palestinians revealed how the Arabs were killed well after the battles ended. Men were separated from women and children. Then these prisoners were executed in groups, against walls or in pens or in front of the grave sites which swelled to over 270 bodies. At first these bodies were left unburied, scattered on the ground where they died, in their village in front of the remnants of their families who were forced to scrounge for scraps of food, living out this nightmare.

The descriptions of the killings were graphic. But perhaps none so chilling as the veteran who described how laughing soldiers raped young girls, shot prisoners in barrels and even brandished pistols, serially shooting random Arabs in the head. Another veteran tried to stop the interview, realizing how it sounded. His confessional was brutally telling: “This is just what the Nazis did to us.” Mustafa Masri, born in 1935 and raised in the village, describes happening on one of the donkey carts that were used to stack and haul dead bodies. There on the stack were the bodies of his father and brother.

The ongoing Middle East conflict is rooted in Tantura and the hundreds of such towns where the oppressed of Europe, the concentration camp survivors, came after WWII to show what lessons the war had taught them about humanity and homeland, power and justice. It explains how Israel has risen as a right-wing apartheid state.

Director Alon Schwartz has revisited the work of Teddy Katz so that it shouldn’t be in vain, in a film that cries out not so much for revenge as for education and change. It was a critical and popular success as an Official Selection of Sundance 2022, and was quite controversial in Israel. It will begin its theatrical run in New York and Los Angeles on December 2.