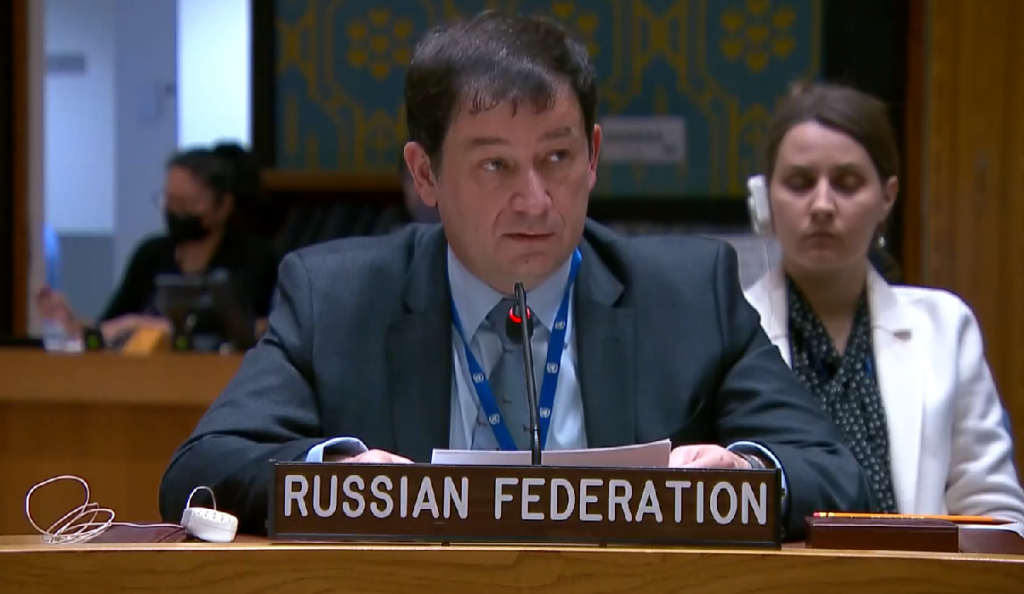 Before moving on to the agenda of this meeting, let me express our perplexity over the fact that you did not find an opportunity to accommodate our urgent request for convening today a Security Council meeting regarding subversive activities at the Nord Stream pipeline. Now we are going to discuss the report by the Director-General of the OPCW that was issued back in August and therefore is not an issue of any urgency, whereas the situation around the Nord Stream, which constantly receives new developments and poses threats to energy security of an entire continent will only be addressed tomorrow. We are truly disappointed by this decision of yours.

We have repeatedly expressed our concern over the fact that discussion of the Syrian chemical file in the Security Council goes around in circles. Reports by the OPCW Director-General regarding the implementation of UNSC resolution 2118 keep replicating uniform baseless allegations against the Syrian side. Those reports are extremely misbalanced. They do not take into account any steps forward made by Damascus and pursue just one goal – make everyone think that the dialogue between Syria and the OPCW is stalling solely due to Syria’s lack of cooperation.

At the same time, our numerous questions to the leadership of the Technical Secretariat remain unanswered. In July, DG Arias again flinched from the invitation to brief the Council, saying that it was the vacation season. As far as we can say, he has done the same thing now. However, Director-General’s busy itinerary, which prevents him from addressing the Security Council, does not seem to bar him from international travel, e.g. to the United States. As for Syria, he has never visited it throughout his entire tenure as Head of the OPCW Technical Secretariat. How is that possible?  A comparison to Director-General of the IAEA, Mr.Raphael Grossi, begs itself. He pays personal visits to the facilities that are under IAEA safeguards, he engages in a dialogue with member states, and briefs the Security Council immediately when requested – even from rather inconvenient locations, for example an airborne plane. This is what head of an international specialized agency should do, if they pretend to be an unbiased guardian of the non-proliferation regime.

Despite this unconstructive approach of the Technical Secretariat, which fixated on one far-fetched problem of non-issuance of visa to a member of the Declaration Assessment Team, Syria interacts faithfully with the OPCW and observes its obligations under the Chemical Weapons Convention. A clear proof of that was the visit of OPCW inspectors to the Barzah and Jamrayah Syrian Scientific Studies and Research Centre Facilities on 11-19 September. As a provisional measure, Syria agreed to change the format of interaction with the DAT and proceed with it in the form of document exchange. Apart from that, on 21 September Syria proposed holding in Beirut consultations of focal points who are responsible for preparing a meeting between DG Arias and Syria’s Foreign Minister F.Mekdad.

However, the report of OPCW Director-General that we consider today does not say a word about it. Once again, it demands a “change of attitude” from Syrians as a precondition for continuing consultations with the Technical Secretariat. We believe if anyone needs a change of attitude, it is OPCW’s leadership, and not Damascus. So far, the Technical Secretariat has stubbornly refused to correct basic methodological mistakes of its engagement on the Syrian file. I am speaking about the Technical Secretariat’s “primordial sin”, which is the violation of CWC-endorsed principles of investigation, first of all the chain of custody.  The notorious report of the OPCW Fact-Finding Mission for Syria on the 2018 Douma incident remains a stain on the reputation of the Organization. I remind that conclusions of the report were doctored under the pressure of Western delegations in order to besmirch Damascus. The fact that DG Arias seems to be avoiding the Security Council the way a first-grader would be running away from the school’s principal gives little hope that he is ready to correct those mistakes.

Same flawed methodology is used by the illegitimate Investigation and Identification Team, which was established when a corresponding decision was pushed through the OPCW Executive Council in violation of the principle of consensus and the Chemical Weapons Convention. IIT reports have only one goal. They do not seek to find out what really happened, but rather want to make real events fit into the pre-cooked narrative asserting Syria’s guiltiness. We reject all the illegitimate products that the IIT has or is going to issue.

As long as the Technical Secretariat of the OPCW sticks to this approach, we see no point in discussing the Syrian chemical file every month. We assume quarterly meetings would be enough. And those should be held in the open format in order to ensure maximum transparency of the discussion.

PERMANENT MISSION OF THE RUSSIAN FEDERATION TO THE UNITED NATIONS