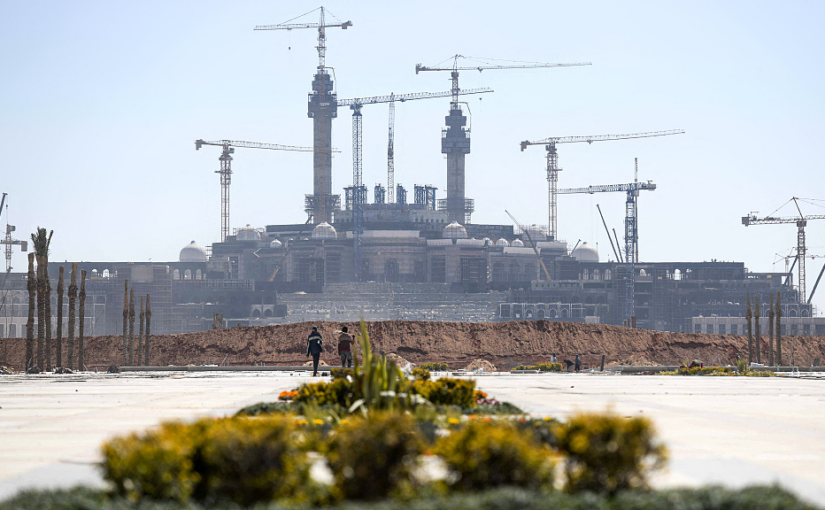 This article by Keith Lamb, first published in CGTN on 14 September 2022, describes the friendly relations between China and the Arab world, noting in particular that the Arab states have refused to support the West’s slanderous accusations in relation to human rights in Xinjiang. Indeed, numerous envoys from the League of Arab States have visited Xinjiang and spoken enthusiastically about the development of human rights in the region.

The author notes that imperialist apologists explain the above away on the basis that Arab states are somehow afraid of China; but surely it’s the countries which “committed carnage against the Arab world” that should be feared, not China, which “has not invaded a single Arab state and doesn’t maintain a myriad of military bases.”

Far from carrying out military aggression against the region, China is involved in extensive cooperation, trade and aid. “Where others have bombed, China builds.” The author observes that, last year, Iraq was the number one recipient of Belt and Road financing, receiving $10.5 billion; this sort of engagement compares favorably with the US-led genocidal war on Iraq. Meanwhile China is cooperating extensively with the countries of the region on cutting-edge technology, including in green energy, telecoms and AI. As Keith says, “this is not a new imperialism but a rejection of it.”

Those blinded by the “free” press believe China’s Xinjiang Uygur Autonomous Region is the location of a “genocide” against Chinese Muslims who are simultaneously “enslaved.” In contrast, envoys from the League of Arab States (LAS), who have been to Xinjiang, talk about China’s social and human rights achievements.

Those who screamed for violence against Arab states, including Libya, Iraq, and Syria, in the name of human rights, solve this cognitive dissonance by claiming that the Arab world is afraid of China. However, their delusion is only carried one step further to absurdity as clearly those who committed the carnage against the Arab world are the ones who should be feared.

In contrast, China has not invaded a single Arab state and it doesn’t maintain a myriad of military bases, which blurs the line between cooperation and occupation. If anything, considering the vast military power accumulated in the Middle East, the LAS support for China shows that they, despite lurking threats, will bravely stand up for truth so that “Weapons of Mass Destruction” lies can no longer be leveraged for the tyrants of war.

Instead, a new page of history is turning, which seeks to constrain the unilateral whims of a hegemonic bully. It is China’s peaceful rise and developmental philosophy contrasted with a fading unilateral order of violence, lies, and uneven development that leads the Arab world to stand with China today.

This geopolitical truth is underlined by political reality. The LAS has just adopted a resolution on Sino-Arab relations where it has vowed support for the one-China principle and seeks to strengthen cooperation under the Belt and Road Initiative (BRI). Furthermore, the LAS declared its appreciation for China’s diplomatic efforts in supporting Arab causes, such as the Palestine issue and promoting the peaceful settlement of regional crises.

Sino-Arab relations thrived under the trade and diplomatic envoys during the ancient Silk Road era and politically their interests converged with the post-colonial struggle for independence and liberation. Today, both sides dreaming of greater prosperity and independence, seek greater South-South cooperation to overcome the unilateral status quo.

Where others have bombed, China builds. In 2021, Iraq was the top BRI beneficiary receiving $10.5 billion in financing. In addition, Chinese companies are building the Central Business District of Egypt’s new administrative capital east of Cairo. In Saudi Arabia, China has already completed numerous rail projects and is focused on both traditional and green energy cooperation to the tune of billions.

This is not a new imperialism but a rejection of it. This is not about China taking over the hegemonic mantel but rather working together with all civilizations to create a democratic multipolar world.

China does not dictate; it cooperates. Where others seek to control the heights of technology, China seeks to collaborate. This is highlighted by the 2021 Initiative on China-Arab Data Security Cooperation, which increases collaboration on AI, 5G, and internet security, as well as establishes global digital governance.

Others selfishly see the world in zero-sum terms. Rather than join the popular BRI, they combat it through their own institutions. All the while, China goes with the flow by adapting its strategy to the future of humanity, which the Arab civilization is a member of.

Since the launch of the BRI, which all LAS states have signed on to, China-led multilateral banks, including the Asian Infrastructure Investment Bank, have established Islamic financing frameworks. In Saudi Arabia, the BRI has merged with the Saudi Vision 2030.

GDI calls for a rejection of old uneven development models driven by unfettered markets, for the whims of capital, which has left the Global South in a losing position. Instead, the priority is placed on a people-centered approach emphasizing even development and equality in globalization that benefits all.

GSI recognizes that local conflicts can have unforeseen disastrous consequences. For example, the destruction of Libya has led to chaos in the Sahel. Consequently, recognizing that we share the same world, multilateral solutions that work together for peaceful settlements must be sought after.

In this new world, the basic principle of non-interference in sovereign affairs is upheld. This is precisely why the LAS immediately spoke out against U.S. House Speaker Nancy Pelosi’s visit to China’s Taiwan region. Indeed, when the Arab world, beset with division and sovereign interference, firmly stands with China, it does so because it stands for its own liberation cause that resists hegemony.

This principle was echoed by Khalil Al-Thawadi, the Assistant Secretary-General of the LAS at the recently held third China-Arab States Forum for Reform and Development, when he called for a concerted effort to reject regional interference in internal Arab affairs while praising China for its comprehensive support.

With bilateral trade standing at $330 billion in 2021, China is the Arab world’s largest trading partner. This economic reality and the myriad of cooperation signals a strengthening of the Sino-Arabic strategic partnership marked by the first Arab-Chinese summit, which is set for December.

With the page of history turning, the Arab world is standing up and speaking out. Others need to take note and get on the same page.