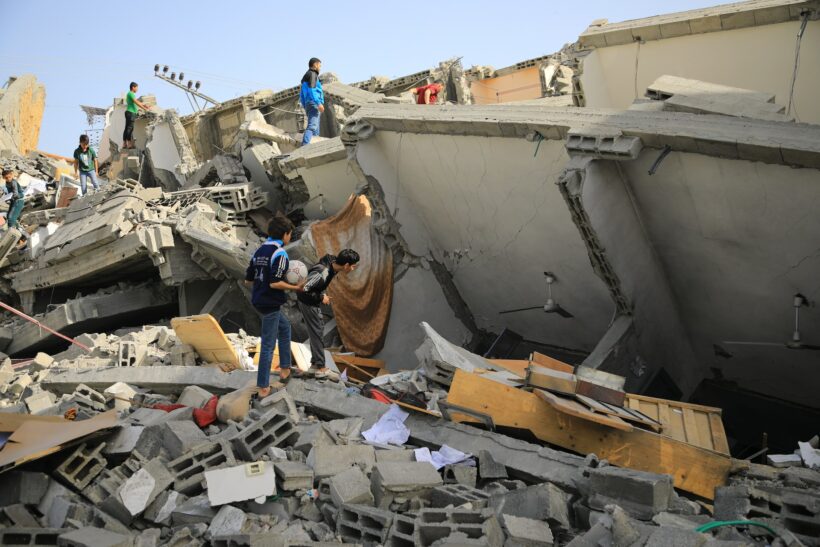 In the first week of August, Israel launched another military attack on Gaza Strip that lasted for 3 days. The attack then ended when both parties agreed on a ceasefire, and life started “going back to normal”.

Nevertheless, that raises the question, what does it mean for life to go back to normal in Gaza Strip after a military attack? It would be too difficult to imagine, but try putting yourself in the shoes of those who suffered and went through this every once in a while; would you be able to resume your daily life as if nothing happened?

Witnessing a war, or participating in one can have the same side effects on people. So, why don’t we think about those who witnessed a military attack in front of them? Wouldn’t they be as traumatised as someone who went to war? Both of them lost families and friends; witnessed death and destruction; and lived through that for a certain period of time. What differs in this situation is that those who survive a war on Gaza Strip live to witness another war, another attack, another death and more destroyed buildings constantly, and would always keep on worrying about whether another military attack would happen and lead to their death.

Resuming one’s daily life after witnessing missiles falling next to you would not be normal for anyone. Israel launched a deadly attack on Gaza Strip last year and it lasted for 11 long days that lead to the death of hundreds. A year later, another attack happened that lasted for 3 consecutive days, and was called “the worst attack since last year’s”. Witnessing both of these attacks, and living through them would not render one’s life normal in any way.

In order to get an insight about what life is like in Gaza Strip after the last Israeli attack on the region, we asked a young Palestinian girl Zainab about how she resumed her life after that attack and about whether her life is actually back to normal.

The 22-year-old girl witnessed throughout her life not only these two attacks that were talked about in the international news but also other ones that were dismissed as “conflicts”. Her answer to this question was the following:

“I could not actually say that life went back to normal after the last escalation on Gaza; we are good at pretending that things are normal; but it’s not. I still can’t walk through my neighbourhood street because it reminds me of the massacres that happened on that street. It reminds me of the families who died and lost their lives and of the awful sound of the war missiles that were randomly flying upon our heads. I still have that feeling that any of these missiles could fall on my house and I would be dead. When I see the debris of the destroyed houses, I feel throttled and start to imagine what these people had to suffer in their last minutes. I’m back to my “normal” daily life and to my work, but I still feel like life is not normal. I always close the curtains on the windows because I want to avoid seeing the destroyed building in front of my work building. I try to go out and spend some time with my friends but the sound of drones in the skies reminds me of war. Nothing is normal after the escalation; it’s over now but many things still remind me of it and I don’t think I will ever feel normal again.”

Seeing how devastating her answers were made me wonder about her vision of what a normal life would be like for her. Her reply to that question revealed some of the things that Palestinians go through but the news has neglected. She stated:

“I dream of living in peace with no more wars, no more injuries, no more losses, no more restrictions, and having my rights back including the right to movement, education, clean water, and electricity.”

Her words revealed another aspect that hinders one from describing life in Gaza as normal. Normal life in Gaza Strip is characterised by lack of access to education, freedom of movement, water and electricity; all of which are restricted by the occupying forces of Israel.

We cannot dismiss life as normal in Gaza Strip especially since the occupier will launch random attacks in the future under the pretext of killing the terrorists while terrorising innocent citizens.

I met Zainab over a year ago when we were both undergoing an advocacy training programme on international law and human rights. Since then, we stayed in touch and we’re currently working for the same youth organisation that organised the training.

Mayssa Issaoui: A translator and a human rights defender who holds a Master degree in TESOL (Teaching English to Speakers of Other Languages) and a Bachelor degree in English Language, Literature and Civilisation. In addition to that, Mayssa is currently working as a certified trainer and the Tunisia National Coordinator at the INGO World Youth Alliance.