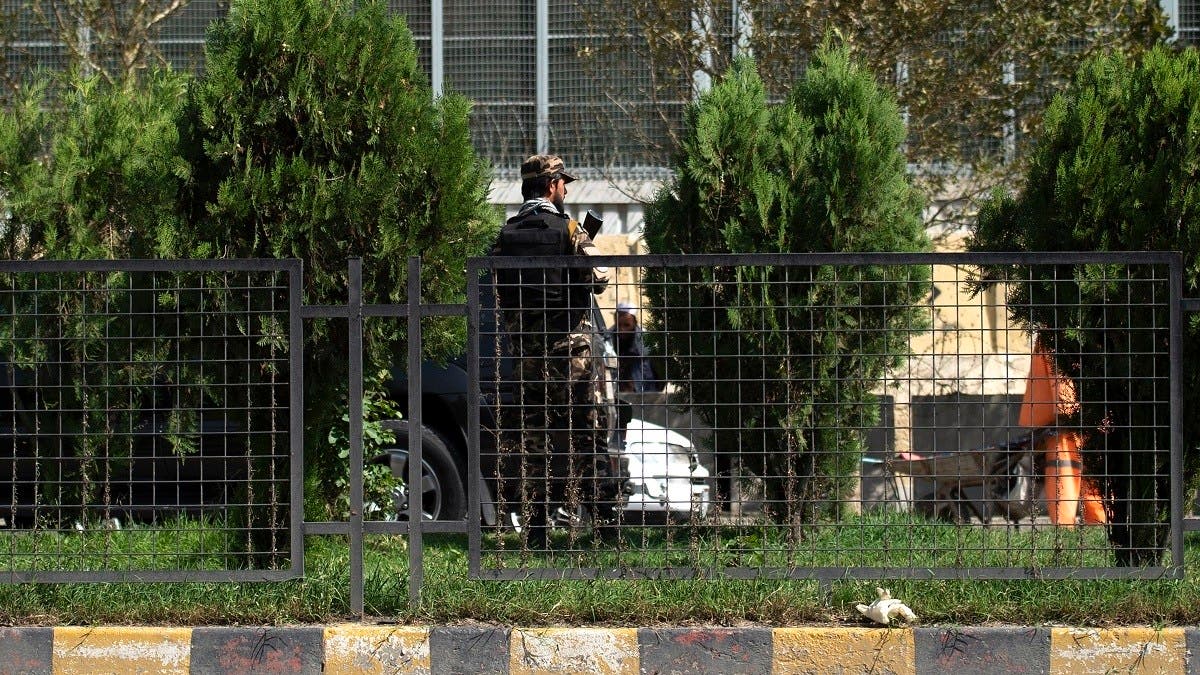 The Anglo-American Axis’ strategic interests are to punish Russia for its leading role in the Taliban’s geo-economic balancing act; prompt Moscow to either double down with Wagner mercenary deployments in order to militarily overextend itself in Eurasia or quickly abandon its growing influence in Afghanistan; and attempt to revive the formerly heated rivalry between it and Pakistan over that country.

Head of the Taliban’s Political Office in Qatar Muhammad Suhail Shaheen told Russian media on Tuesday that foreign intelligence services played a role in ISIS-K’s terrorist attack against the Russian Embassy in Kabul. According to him, “Certain well-known elements in Afghanistan who have the support and financing of foreign special services resort to such terrible terrorist acts designed to jeopardize our relations with Russia and other crucial regional players. They hate seeing these relations strengthened. And they would equally want to scare investors away from Afghanistan.”

Despite this high-level representative of Afghanistan’s de facto government declining to blame any spy agency in particular, it’s still possible to speculate the sequence of events leading up to this week’s provocation, including the extent of foreign intelligence’s involvement and the motives behind it. “The Anglo-American Axis Is Hellbent On Destabilizing Eurasia”, to which end they’re jointly leading NATO’s proxy war on Russia through Ukraine, so it therefore naturally follows that these two are the most likely culprits. They also have a history of dividing and ruling others, which adds credence to this theory.

While it remains unclear exactly how the suspected masterminds might have orchestrated this suicide bombing, they could have at the very least abetted the attack through those assets that they retained after their chaotic evacuation from Afghanistan last year. Western intel’s role in foreign terrorist attacks is almost never direct like many in the Alt-Media Community (AMC) imagine, but indirect with respect to having their assets provide encouragement, intelligence, logistics, and/or material support in order to keep their own hands clean and thus “plausibly deny” any involvement in those incidents.

So too did it therefore most likely transpire that Western-connected Afghan assets played such a role after at the very least receiving a wink and a nod from their foreign patrons. The Anglo-American Axis’ (AAA) strategic interests are to punish Russia for its leading role in the Taliban’s geo-economic balancing act; prompt Moscow to either double down with Wagner mercenary deployments in order to militarily overextend itself in Eurasia or quickly abandon its growing influence in Afghanistan; and attempt to revive the formerly heated rivalry between it and Pakistan over that country.

The first-mentioned motive is self-explanatory since those two are always against Russia expanding its influence anywhere in the world. The second pair relate to building upon the Rand Corporation’s 2019 policy proposal for “Overextending & Unbalancing Russia” and triggering its strategic retreat from Eurasia respectively. The final one, however, deserves a bit more explanation since it isn’t so obvious at first glance. It’s also extremely sensitive and should therefore be addressed very carefully by all interested observers in order to avoid inadvertently fueling the flames of this Hybrid War scheme.

Russia and Pakistan were in a rapid rapprochement with one another over the past half-decade prior to the US-orchestrated but domestically driven post-modern coup overthrowing multipolar Prime Minister Imran Khan in early April as punishment for his independent foreign policy, particularly its Eurasian dimension as well as his refusal to host US bases or at least grant transit rights to its drones. Since then, relations officially remain cordial but have been frozen in practice. Furthermore, the new authorities are suspected of “passively facilitating” a high-profile US drone strike in Kabul last month.

That incident exacerbated the dangerous Pakistani-Taliban security dilemma, resulting in Afghanistan’s de facto leaders accusing their neighbor of being an American military proxy, which coincided with reports that it was also clandestinely shipping military equipment to Kiev via a transnational UK-led airbridge. Although the second-mentioned development should be interpreted solely as an apolitical business decision without any proxy war intentions, it also can’t be denied that the post-modern coup regime has an obvious interest in currying favor with their Western patrons.

Considering suspicions over the past two decades that Pakistan’s ISI spy agency played some role or another in the Taliban’s prior suicide bombings against Western targets in Afghanistan (which it’s always denied), and remembering the vast network of contacts that they cultivated with that group’s various factions over that time, the present optics might suggest to some that it could have also had a hand in the latest attack against the Russian Embassy in Kabul or at the very least didn’t share relevant intelligence about this plot ahead of time for whatever reasons.

Some crucial clarifications are required at this point in order for the analysis not to be misinterpreted or the intentions behind it misportrayed by agenda-driven forces. Pakistan has indisputably been one of the world’s top victims of terrorism since the start of the century, and its authorities have consistently denied ever cavorting with such groups despite repeated accusations from America, India, and the erstwhile Western-backed Afghan government. Moreover, despite presently being ruled by a US-installed post-modern coup regime, Islamabad still hasn’t publicly condemned or sanctioned Russia.

Another point to mention is that Pakistan’s crippling economic crisis that was catalyzed by the consequences of the regime change against former Prime Minister Khan could potentially result in it reaching out to Russia for food and/or fuel support in order to relieve its people’s suffering and thus help ensure its rulers’ political survival if sufficient aid from their American patron isn’t forthcoming. Not only that, but the emergence of evidence suggesting that Pakistan played any role in ISIS-K’s anti-Russian terrorist attack would risk ruining relations with China, thus fully isolating Islamabad.

For these reasons, it’s extremely unlikely that ISI had a hand in what just happened, but it also can’t be discounted that the pro-American school of thought within this institution that’s considered to be pulling the strings in Pakistan nowadays after the US-orchestrated post-modern coup could have declined sharing relevant intelligence with Russia ahead of the attack. This is purely the realm of conjecture, but it wouldn’t be surprising if the most immoral among this group might have thought they could earn economic or political favors from their Western patrons by not stopping the attack.

That said, readers should be informed that the Pakistani Foreign Office quickly condemned Monday’s suicide bombing, which discredits the preceding theory. Even in the event that ISI – which is rightly regarded as the most powerful foreign intelligence agency active in Afghanistan – somehow came across some intel about the the attack that ultimately transpired, they should be given the benefit of the doubt for not sharing it since it could have either not been considered credible or detailed enough to pass on, or they might have received it right before the attacked happened and thus too late to stop it.

The point in clarifying all of this from every possible angle is to ensure that nobody falls for the AAA’s speculative scheme to provoke a security dilemma between Russia and Pakistan in Afghanistan for divide-and-rule purposes. Even though trust between these two Eurasian partners has seemingly been damaged by the US’ post-modern coup in Pakistan, they still maintain close counter-terrorism cooperation according to President Putin in his optimistic message to that country on the occasion of its Independence Day last month.

For that reason, it’s absolutely imperative that Islamabad voluntarily shares whatever intelligence it presently has about the latest suicide attack as well as its suspicions about which foreign intelligence agencies the Taliban was referring to in its representative’s dramatic statement. It also goes without saying that Afghanistan’s de facto leaders should also discretely reveal the suspected culprits behind closed doors if they feel uncomfortable publicly pinpointing them out of fear of further worsening their already dismal chances at international recognition and receiving humanitarian aid from the West.

Considering the Pakistani post-modern coup regime’s indebtedness to the West for bringing it to power as well as that country’s dangerous security dilemma with the Taliban, it’s possible that Islamabad might decline blaming the AAA for its likely involvement in that terrorist attack even if it has indisputable intelligence proving their role, while its Afghan rivals might blame Pakistan for reasons of “political convenience”. It could therefore be very difficult for Russia to get down to the bottom of which spy agencies were behind this, hence why its experts must be judicious during their investigation.

From the insight that was shared in this analysis, ISI almost certainly didn’t play a direct role in this terrorist attack and any speculatively indirect one doesn’t seem all that credible at this point. Rather, everything thus far points to the AAA, which had three strategic objectives that it wanted to simultaneously advance: punish Russia for its close partnership with the Taliban; pressure it into either overextending itself in Afghanistan or abandoning its influence there; and artificially manufacture the conditions for provoking a self-sustaining cycle of suspicions between Russia and Pakistan.