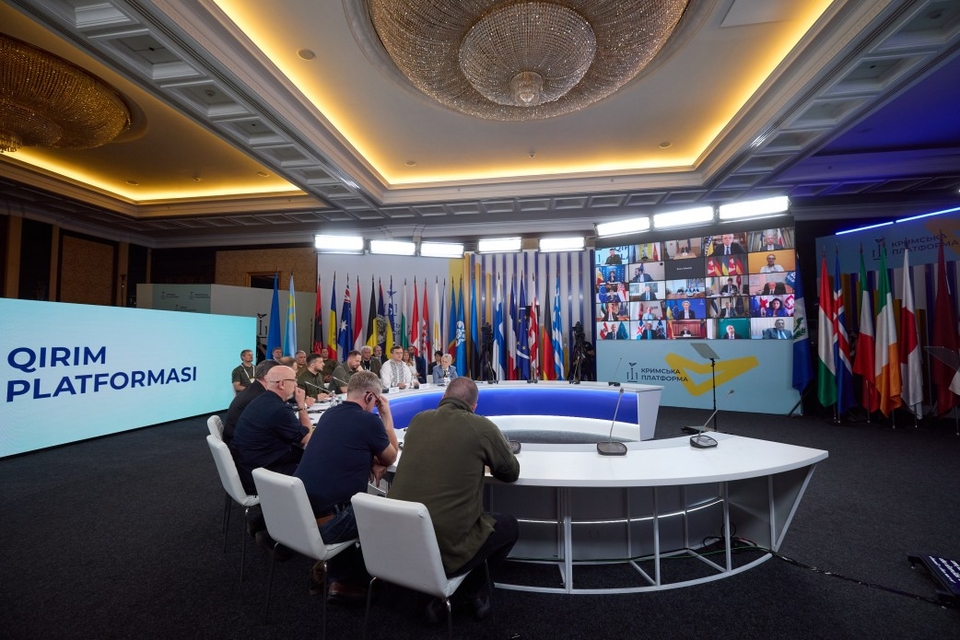 Turkish President Recep Tayyip Erdogan recently pointed out in a video message that “The return of Crimea to Ukraine, of which it is an inseparable part, is essentially a requirement of international law”, statements he made within the framework of the second international summit of the Crimean Platform.
Erdogan added that “ensuring the safety and well-being of our Crimean Tatar compatriots is also among Turkey’s priorities”.  The president again called for the release of Nariman Dzhelyal, deputy speaker of the Crimean Tatar “parliament”, and at least 45 other Tatars who remain detained on the peninsula.

The Crimean Platform Summit, which Kiev held online,  bringing together the leaders of Western countries, more strongly maintained its anti-Russian character this year, without losing one iota of the characteristics with which last year Russian Foreign Minister Sergei Lavrov described it as a witches’ meeting (Sabbat, coven) in which “the West will continue to cultivate the neo-nazi and racist sentiments of the current Ukrainian authorities.”

For this reason the position of the skilled politician that is Recep Tayyip Erdogan is not surprising. In fact, since the beginning of the Russian military operation in Ukraine, Ankara has been able to play with two hands, maintaining a balance between the West, represented by the United States and its NATO allies, and the Russian Federation. It is precisely this quality of expert balancing act that has led it to play the role of mediator because Turkey has powerful interests on both sides of the conflict.

At the level of Moscow, Ankara is one of the main commercial partners of the gas giant Gazprom, with which it has established a series of agreements for energy supplies from the Russian Federation. For example, in 2021 Russia supplied Turkey with 5 million 800 thousand cubic meters of gas. Moscow has also sold Ankara the famous S-400 missile systems. On the other hand, if we analyze Turkey’s relationship with the West, it cannot be overlooked that since 1952, Ankara has been a member of NATO, and hosts numerous bases, including the Incirlik Air Base which has served as a command base for NATO operations in the Middle East. There is no doubt that for NATO, staying on Turkish territory gives it a geostrategic advantage. As for the migration problem, Ankara functions as a containment wall for the numerous migrants seeking to enter Europe through the Balkan Route.

But Turkey, independently of the Russia-Ukraine conflict, has other objectives on the table that indirectly affect what happens between Kiev-Moscow. In the Balkans, for example, Erdogan wants to start bilateral collaboration with Belgrade, especially in the area of arms exports, which on the one hand, will allow modernizing the Serbian armed forces and, on the other hand, will give Turkey the opportunity to exercise a greater presence, both military and of its war industry, in the heart of Europe; with a turnover that, according to some analysts, would be close to 15 million euros. Just as it is no secret that Turkey also wants to expand its sphere of influence and investments towards Asia; the decisions it has taken amply demonstrate this willingness to expand diplomatic and political relations with this area. It is no coincidence that Ankara has made huge investments with the aim of being able to connect Central Asia with Anatolia through major infrastructures: railroads, ports in the Caspian Sea and energy facilities, through Kazakhstan to China, which can reinforce its role as an energy hub.

If Erdogan succeeds in his role as mediator, he will gain international recognition as a “peacemaker” or “the one who achieved world peace”, which could mean that Erdogan will continue to play his role as a mediator in the coming days. This could mean for Erdogan, in addition to going down in history, being rid, once and for all,  of the image of dictator placed on him after he imposed strict policies against dissidents of his government in 2013, without disdaining all his warlike wanderings in different places. The chessboard is still open, the game has not been closed, the political players are still moving the pieces.