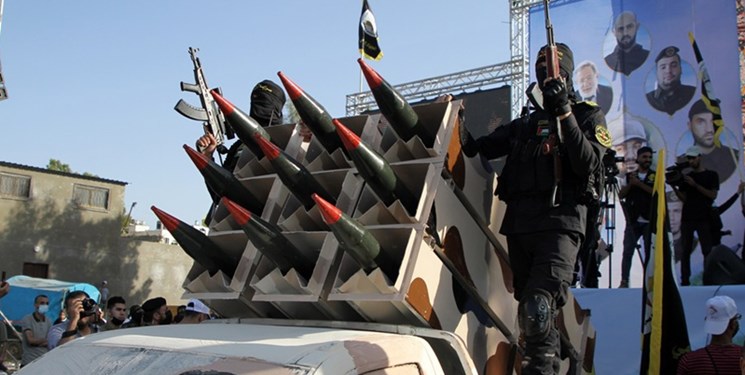 “The Palestinian Islamic Jihad movement will continue to resist,” Nasser Abu-Sharif said on Wednesday, speaking at a joint press conference with Khaled Al-Qaddumi, the Palestinian Hamas resistance movement’s representative to Iran, on the achievements of the latest war between Israel and resistance in the Gaza Strip, presstv reported.

“The ultimate goal has not been achieved, and this resistance will continue until the complete liberation of the Palestinian land,” he said.

Abu-Sharif noted that martyrdom is not an obstacle to liberation of the Palestinian land.

He said the way Palestinian resistance and nation respond to the Israeli regime has evolved and progressed over the years.

“It is true that we lost two of our senior commanders, Khaled Al-Mansour and Tayseer Al-Jabari, and this is a great loss, but the Palestinian Islamic Jihad movement is an organized movement that can replace these martyred commanders,” he added.

Abu-Sharif was making a reference to a wave of Israeli airstrikes on the Gaza Strip that began on August 5 and lasted for three consecutive days, killing dozens of people, including 17 children and top members of Islamic Jihad. Hundreds more were also injured during the Israeli aggression.

In response to the Israeli onslaught on Gaza, Islamic Jihad fired hundreds of rockets at the Israeli-occupied territories, prompting the regime in Tel Aviv to accept an Egyptian-brokered ceasefire.

Qaddumi for his part said resistance will avenge the blood of Palestinian martyrs. He urged journalists to report the Israeli regime’s atrocities.

“In its aggression against the Gaza Strip, the Zionist regime martyred a number of Palestinian citizens, including five children in the Jabalya camp,” he said.

Israel on Tuesday admitted that it was responsible for the killing of the five Gazan children, after initial reports blamed Islamic Jihad’s misfired rockets for the killing.

Immediately after their deaths, citing off-the-record assessments, several Israeli officials claimed that the five were most likely killed by a misfired Islamic Jihad rocket.

“We spoke to our brothers at the beginning of the recent battle to respond to this crime,” Qaddumi said, adding, “We raised two things at the same time. Firstly, that the Zionist regime is responsible for any crime, and secondly, that we have the right to legitimately respond to these crimes and take revenge.”

The Hamas representative said the Israeli regime started a propaganda war against the resistance in the midst of the battle and claimed Palestinian resistance groups were disunited.

“We are at a very critical juncture concerning the Palestinian issue and we offer our congratulations over the victory in the recent battle of Gaza, which created a deterrent against the occupiers,” he added.