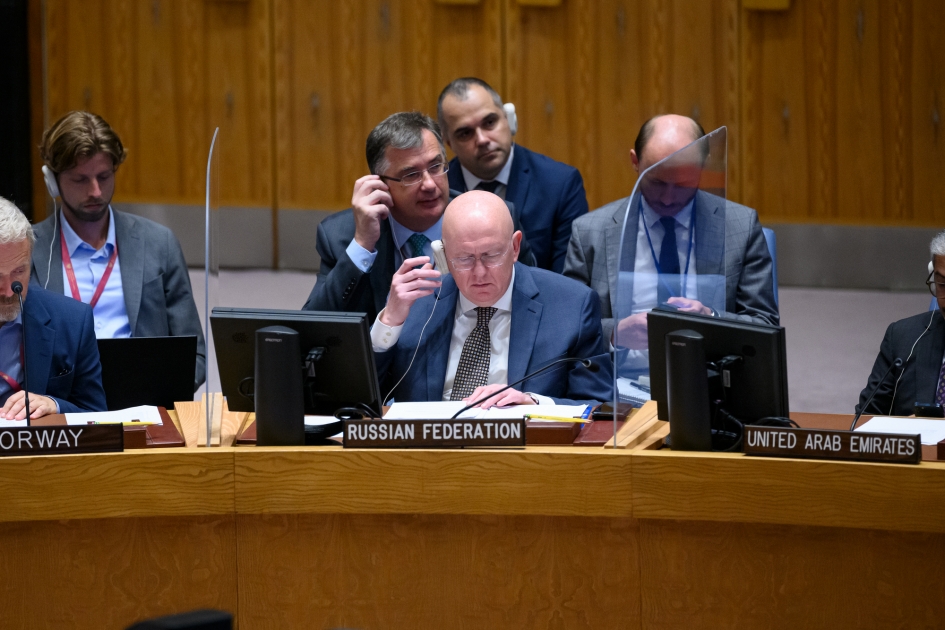 We need to eliminate completely the remaining hotbeds of international terrorism in Syria, put an end to the presence of ISIL and other terrorist groups on the Syrian soil.

We thank USG Voronkov and CTED Acting Executive Director Weixiong Chen for their detailed analysis of the situation in the area of countering ISIL. We also followed the remarks by Mr. Martin Ewi with interest.

We share many assessments contained in Secretary-General’s report on the threat posed by ISIL. On our part, we woulkd like to make the following points.

Russia stands on the frontline of the fight against terrorism. Having passed through the ordeals of the 90s, we have accumulated vast experience. Though in some cases this was rather sad experience, it gave us an opportunity to respond to present-day challenges efficiently. We approach all our obligations with great responsibility, and we intend to keep assisting states in combating international terrorism, i.a. by making financial contributions to the UN Office of Counter-Terrorism, UN Office on Drugs and Crime, and regional specialized mechanisms. We will continue developing multilateral and bilateral cooperation, but only with those who truly want to fight against terrorists rather than play nice to or even finance them.

We need to eliminate completely the remaining hotbeds of international terrorism in Syria, put an end to the presence of ISIL and other terrorist groups on the Syrian soil. At this moment, they have strongholds on the territories that are not controlled by the Syrian government. As recently as on 4 August, crews of Russian Air and Space Forces, when air patrolling in the skies above Syria, discovered and eliminated a group of terrorists from “Liwa Shuhada al-Qaryatayn”. This terrorist militia is based in the Al-Tanf area, which is controlled by the US military. Withdrawal of American occupying troops from the Syrian territory would signify a prompt and indivertible elimination of the lasting terrorist presence in that long-suffering country, as well as of resident terrorists in the neighboring states.

When discussing Secretary-General’s reports on threats posed by ISIL, we repeatedly raised here in the Security Council the issue of preventing weapons from ending up in the hands of terrorists. We must note that the latest report provides some updates on that matter. In particular, it says that some terrorist and radical groups have called their members to make use of the events in Ukraine to access to arms that uncontrolledly flows to Kiev from Western states. In this context, the report accentuates growing risks of terrorist attacks to be committed by standalone terrorists in Europe.

We believe we need to dwell on this in greater detail in the framework of this discussion. Ukraine now ranks alongside Syria, Iraq, Libya, Afghanistan. Ukraine is receiving a lot of Western weapons, ammunition, and dual-use products. Back in the day, the influx of arms in Iraq and the use of terrorists for geopolitical purposes led to the rising of ISIL. Arms deliveries to Libya caused the terrorist threat to spread across most of Africa. In order to overthrow the legitimate government of Syria, the West supported and gave weapons to ideologically motivated terrorists, having announced them to be “moderate fighters for freedom”.

In the Middle East, Northern Africa, and Afghanistan, the United States and its satellites charged opposition forces that either turned into terrorists quickly or became closely associated with them. However in Ukraine, they support and train nationalist and neo-Nazi formations. Terrorists used conflicts in Afghanistan, the Balkans, Libya, Iraq, and Syria to exchange tactical know-how and reinforce transnational networks. By the same token, neo-Nazis and adherers of the theory of white race supremacy use Ukraine as a military lab. As for the Western states, they unabashedly support this.

At this point, I must say a couple of words about double standards.

In 2021, the US Congress made another attempt to list the notorious Ukrainian Azov battalion as a terrorist organization.

Before that, in 2015, the US House of Representatives made some amendments to the draft Department of Defense Appropriations Act in order to preclude military budget from being used to support the Azov battalion. The Congress designated this formation as a Ukrainian paramilitary neo-Nazi militia. In 2018, the House of Representatives voted to make sure that “none of the funds made available by the Act may be used to provide arms, training or other assistance to the Azov Battalion.”

But after Russia started its special military operation, Azov battalion, this deadly ideological formation, suddenly turned into a “detachment of the heroes of Mariupol”. The US authorities prioritized geopolitical gains over the real fight against terrorism and various manifestations of extremism.

In Russia, the Azov battalion is listed as a terrorist organization, and we have quite a few reasons for that. Members of this formation who surrendered to the Russian side started to give testimonies. Apparently, this is why the Kiev regime launched a precise strike targeting its former “combat elite” in a detention facility in Yelenovka.

Here is another parallel to the events in the Middle East, Northern Africa, and Afghanistan. Part of the mercenaries, neo-Nazis, extremists, racial supremacy theorists who have rushed to Ukraine from all across the Western world, if they survive, will get some combat experience and then return to their countries of origin or third countries – the way FTFs do after having fought for ISIL. Something similar happened when the surviving bandits from Chechnya fled to Europe as political refugees, and when later on they carried out terrorist acts in the countries where they received asylum.

If anyone doubts what I am saying, please feel free to turn to numerous publications by specialized experts in Western sources.

Before concluding, let me say a few words about the situation in Afghanistan. We have heard American representatives claim to have eliminated Al-Qaida’s leader Ayman Al-Zawahiri. This is remarkable news, but there are at least two dimensions to it. On the one hand, if confirmed, this will be an indisputable success of American special services. On the other hand, it makes us doubt whether the pretentious claims made by the US Administration a year ago that American troops had allegedly left Afghanistan after completing all outstanding tasks in countering terrorism were actually true. After 20 years of the presence of the US and NATO forces, the situation in Afghanistan is teetering on the brink of a humanitarian disaster, and attacks by ISIL are growing in number.

PERMANENT MISSION
OF THE RUSSIAN FEDERATION TO THE UNITED NATIONS

‘Withdrawal of US Forces to Facilitate End of Terrorism in Syria’