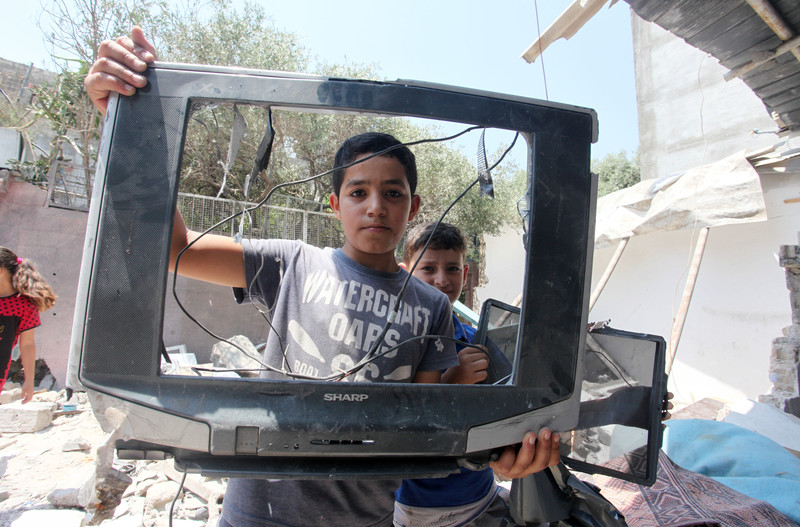 Palestinians from the Abu Jasser family inspect the rubble of their house, which was hit by an Israeli airstrike in Jabaliya in the northern Gaza Strip, 9 August 2022.

I was sitting in my living room, holding my 2-month-old baby, Sarah, and admiring her babbling, some of the best sounds I’d ever heard.

Life in Gaza can scarcely be described as normal. However, this felt normal. A moment of joy sitting and laughing with Sarah and my wife, Farah, and other family members.

Life hasn’t treated me well enough to hold on to memories of pleasant moments like this.

Then, a buzz from my phone. I instantly picked it up. A message from another journalist, sent to a private journalists’ group. It read: “The Israeli leadership declares a military operation on Gaza.”

A heavy feeling struck my heart: the sense that this may be the end to everything I’ve ever loved.

It was Friday, around four in the afternoon. Sarah’s babble faded to the back of my mind as more notifications came in of Israel’s bombings.

Three days before the Israeli military operation began on 5 August, Israel had restricted the entry of fuel and medical equipment into the Gaza Strip through the Kerem Shalom checkpoint. This is typically a sign that something terrible is about to happen in Gaza.

I wish my instincts had been mistaken, but my prior wartime experiences, similar to those of the rest of the people of Gaza, compelled me to warn my family of what was coming.

Many had lived through the previous Israeli wars on Gaza in 2008, 2012, 2014 and 2021. Yet, this time, upon hearing the news of another nightmarish war, they sat in silent disbelief.

I fought a deep sense of guilt at my bringing the innocent Sarah into a life in Gaza, a place that has not known peace in my 28-year lifetime. This sense of guilt stems in part from some of my own streams of thought throughout the years, of wishing never to have been born, especially in the midst of the trauma of wartime.

Always a feeling of loss

I remember the May 2021 Israeli assault on Gaza and how Farah and I, then engaged, lived apart, in separate homes, until our wedding two months later. During that war, I was the project manager of the youth storytelling project We Are Not Numbers, and Farah was the group’s social media coordinator.

Having that level of engagement with the news is traumatizing enough. However, reporting on stories so similar to your own is even more terrifying. We reported on stories of newlyweds and new parents losing their loved ones.

We came to believe that with each hit on Gaza, Israel was putting an end to a dream of lovers being united, turning their potential joy into funerals.

When the ceasefire was announced the evening of 7 August, a few international journalists contacted me to help coordinate their assignments in Gaza, including Bel Trew, an international correspondent for The Independent. Previously, we had worked on stories about the al-Wihda street massacre following the Israeli airstrikes of 16 May 2021.

For those stories, we interviewed Anas al-Yazji, and it was his voice that came to me during Israel’s latest assault. Al-Yazji had lost his fiancée, Shayma Alaa Abu al-Ouf, during Israel’s bombing of al-Wihda street, in which 10 members of the al-Ouf family were killed.

“I asked her to take shelter in a safe place,” he said. “A violent explosion took place, and then I knew she was dead. I said goodbye to her as she was smiling.”

What if I lose Farah, or Farah loses me? Why is there always a feeling of loss in Gaza?

After almost 10 years of questioning and pressure from my parents, I had no excuse as a 28-year-old Palestinian not to have a kid.

“Once your kids are grown, you won’t be strong enough to help them,” my mother would say.

When Farah and I married in July 2021, we had a thoughtful conversation about whether to have a child. I had a selfish desire to have a child, because my heart always sensed it would be a girl.

Sarah, as we named her, means happiness in Arabic, a sentiment that has largely been lost in Gaza during the 15-year siege that has robbed people of any sense of happiness.

The first time I carried Sarah in my arms, I felt more human than ever before. A smiling infant whose world revolved around her, a bundle of feeling and emotion.

As soon as the bombardment began in Rafah city, where we live, I realized that Sarah, who knows nothing about Gaza, was afraid. She clasped her hands and held Farah tightly. “She’s too fearful, Issam,” Farah said.

All I could tell Farah was to “cuddle her properly” and move to the ground floor, my parents’ apartment, for safety. Farah refused to leave our apartment, though, and I had to leave with her, taking my work with me.

I reported the news via Twitter. News of the 44 innocent lives lost, 15 of those children. Meanwhile, a paradoxical moment as I watched children run around the streets of Rafah city, playing as the bombs fell.

With each bomb dropped, I wondered if Sarah would be the next to die. I shared my thoughts on Twitter, about the guilt and strain of living a life in Gaza, and friends commiserated. How can we continue to build homes that will be destroyed? Start families whose members will be killed by Israeli bombs?

In Gaza, there are thousands of Sarahs. We all must work so they never have to go through another Israeli aggression. How many Sarahs must die before Israel is held responsible for its crimes?

Issam Adwan is a Gaza-based journalist and human rights activist who works at the Palestinian Center for Democracy and Conflict Resolution as a media officer. He was the project manager for We Are Not Numbers.