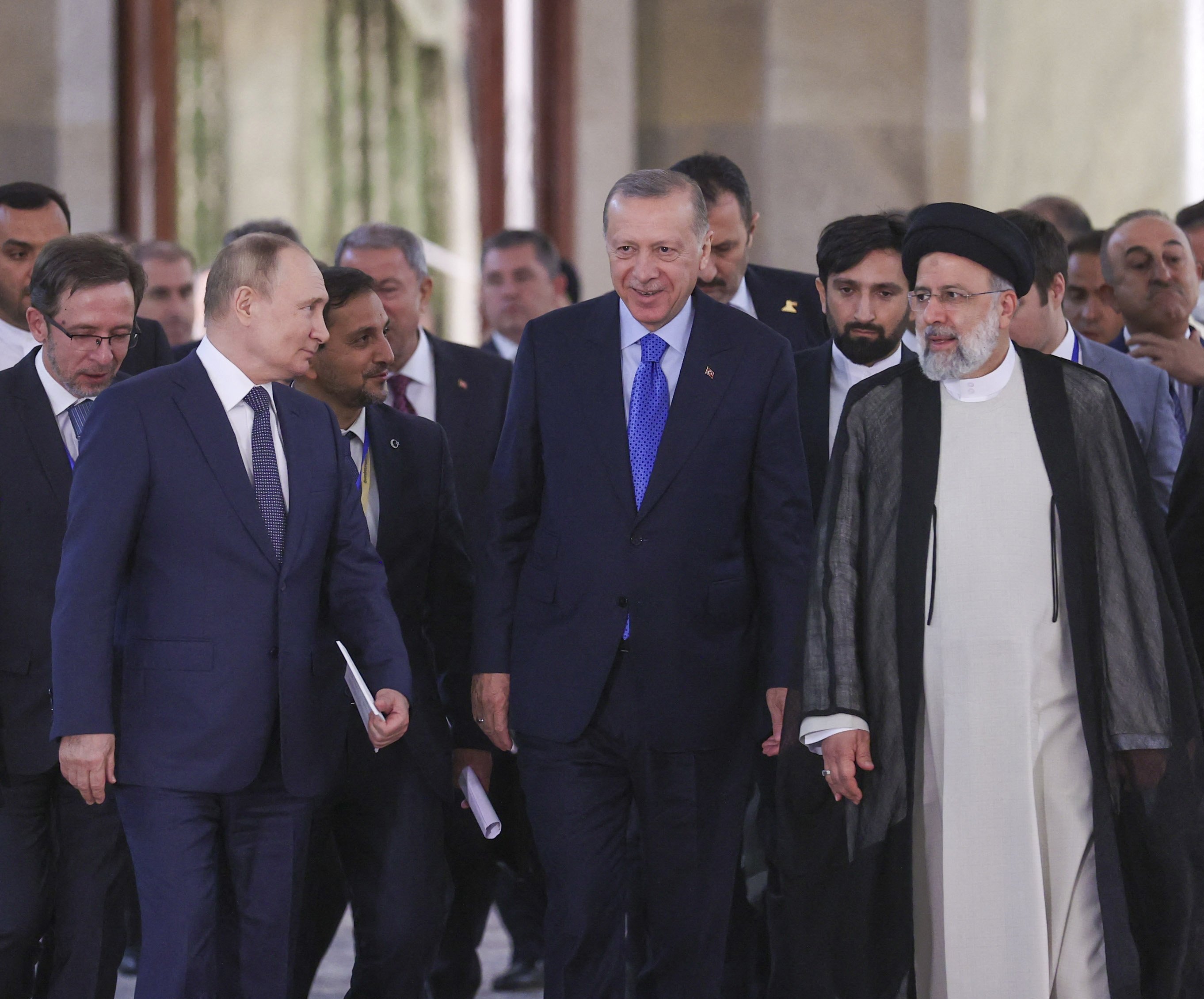 Isolation from the West and Protracted War

Following the Jeddah summit, which emphasized the need for Middle Eastern countries to reach mutual understanding, settle their differences and find a solution to the Palestinian case, the Iranian-Turkish-Russian summit in Tehran confirmed similar objectives. Despite the differences between Iran and Turkey over Syria, in addition to Ankara’s insistence on its position to keep parts of the Levantine country occupied, the trilateral recorded and demonstrated a new strategic axis.

This indicates the determination of the countries of the unruly anti-US alliance (Russia and Iran) to move away from the West: to join forces to overcome differences, find common interests and adhere to better cooperation and understanding. Both the Tehran and Jeddah summits resulted in a success for all parties and demonstrated their willingness to break the failed isolation that the U.S. exerts on its opponents and enemies, not to mention its necessary ally (Turkey).

Undoubtedly, the situation in Syria was one of the main topics discussed at the summit that brought together Presidents Ebrahim Raisi, Vladimir Putin and Recep Tayyip Erdogan. It is paramount to mention that Russia and Iran are the countries subject to the strictest sanctions by the West and have united around several strategic objectives. The most important objectives are to expand the horizon of cooperation in energy, military industry, trade and the use of local currencies for exchange and economic growth. Therefore, de-dollarization is one of the most significant goals for all countries that yearn to break away from the political-financial domination of the United States.

The summit in Tehran did discuss Syria and the importance of its sovereignty, but no less important problems were also discussed. Certainly, Russia and Iran are gas and oil exporters that decided to cooperate with Ankara in the energy field, among other objectives that have higher priority for Turkey. This cooperative maneuver would allow President Erdogan to offer his country as an essential primary source for redistributing Russian-Iranian energy to the European continent close to Turkey. Such a nation would represent the most suitable and closest solution if the old continent could not otherwise obtain the quantity (155 billion cubic meters of gas and 2.5 million b/d) needed to reduce dependence on Russian gas. Algerian, Emirati and Azeri gas and gasoline may not be enough to meet the European Union’s (EU) energy supply needs.

In fact, Ankara could benefit from becoming an energy hub and rise to an important strategic position to support Europe in energy matters. In return, the EU could review Ankara’s application to join Europe, submitted in 1999 without success.

Another important point of discussion during the summit was the cooperation and memorandum of understanding worth $40 billion between the National Iranian Oil Company (NIOC) and Russia’s Gazprom. This strategic step signals the intentions of these oil-producing countries to dispense with U.S. and European companies, which have long monopolized the global oil industry markets with their capabilities in manufacturing products associated with drilling, extraction and the construction of oil and gas refineries. Russia would replace transnational companies such as BP, Total, Shell, Chevron, ExxonMobil and RDSA, which are already installed in West Asia (and around the world).

Many Western oil companies that signed contracts with Tehran pulled out in 2018 when President Donald Trump shattered the nuclear deal and imposed severe sanctions against Iran. This step signals and confirms Iran’s radical turn to the East as promised by President Ebrahim Raisi when he came to power. It proves the Islamic Republic’s determination to increase its oil extraction in the midst of a thirsty market, as shown by recent international events and the consequences of the war in Ukraine.

There is no doubt that the presence of a country (Turkey), which holds the largest number of troops after the United States in NATO, at the same table as Presidents Putin and Raisi, is a crucial step in relation to the context of the imposition of U.S. sanctions and the isolation of Moscow and Tehran.

Both Presidents Raisi and Putin agreed to develop a relationship with Erdogan and convince him to defuse the situation in the Levant, where the three countries converge. Moscow and Tehran enjoy strong influence and solidarity with the Damascus government in its quest to calm things down in the Middle East, and present the demands called for a week earlier by Arab presidents, kings and princes at the Jeddah summit. Stability in Southwest Asia, particularly in Syria, is on the priority list of Arab and Middle Eastern leaders.

In recent months, with the intention of combating terrorism, the Turkish president has expressed his intention to move his military forces 30 kilometers northeast of Syria as a buffer zone to which Iran, Russia and even the United States had not reacted or rejected. Iran and Russia responded that they supported the fight against terrorism and that the security of Syria and Turkey is also the security of the former two. Therefore, cooperation must pursue common goals, hence the need to coordinate with Turkey, due to Russia’s and Iran’s awareness that President Erdogan might agree to halt their plans to move their forces to take more Syrian territory.

At the summit there were differences over the definition of terrorism and which terrorist organizations in Syria all sides would like to eradicate. Erdogan considers the U.S.-allied Kurds to be terrorists, unlike Putin and Raisi, who believe that the jihadist organizations in Idlib (under Turkish control) are the terrorist entities. Other disagreements also emerged regarding the dossier of displaced persons and the return of refugees to Syria. Erdogan wants them to return to Idlib, under the control of his proxy forces and militias.

Moscow and Tehran harbor no illusions that President Erdogan will leave Syria completely, particularly the area in and around Idlib, where currency predominates alongside the Turkish language and the school curriculum has changed. Everything about daily life in the northwestern province of Idlib has been modified to meet Turkish standards.

So, as long as Erdogan is in power, Turkish forces will remain occupying part of Syria. This is something that neither Russia nor Iran can alter at present, due to the desire of both countries to avoid any direct military clash with Turkey. Moreover, the current priority is the convergence of multiple strategic interests among the three countries and the need to pacify the region to confront U.S. unilateralism and its control over the world. Provoking Erdogan at this stage is therefore inconceivable. However, Tehran and Moscow are trying to bring their views closer to those of Ankara and to cooperate to promote the Astana Treaty and the new Syrian constitution to ease the political stalemate and avoid further conflict.

But whatever the parties agree to in Tehran, the U.S. occupation of northeastern Syria will remain and the theft of oil by Washington’s outsiders will continue, as President Donald Trump shamelessly declared a few years ago. And under the Biden administration, the U.S. is not expected to abandon the Middle East anytime soon or to have any clear policy for the region. Consequently, Damascus, Tehran and Moscow are trying to preserve Syrian territories, avoiding losing more territory to their Turkish ally. The Tehran summit will reflect positively on Syria. The talks focused on preventing Turkey from carrying out a new military operation and freezing the situation for a more appropriate time.

Turkey has one foot set on the West and the other set on the East, without being part of one axis against the other. Instead, Erdogan is working to keep all his options open as long as they serve him in the next elections next year. Therefore, he does not hesitate to announce future steps for cooperation with Iran (which is going through severe Western sanctions) in the field of energy and military industry to develop Ankara’s economy and give it some impetus to find a way out of its economic crisis.

In addition, Turkey is acting as a mediator in the Ukrainian grain export situation between Russia and Ukraine. However, the success of this plan is related to the lack of any desire by Washington to withdraw its allegations and its ongoing propaganda against Russia. The United States holds Russia responsible for the global food crisis, while it was Washington itself that imposed sanctions against 68 Russian shipping companies and blocked Russian banks from paying into the SWIFT system, so that they could no longer sell and collect the price of their wheat if it was exported. Moscow is the leading wheat exporter on the planet (24%) with twice the capacity of Canada and the United States (second and third), while Ukraine is only fifth (8%) after France (10%).

It is natural that Israel is concerned about the Russian-Iranian rapprochement and the results of the Tehran summit, especially after Russia began to take uncompromising positions regarding Israeli attacks on Syria. Moscow accused Tel Aviv of undermining Syrian sovereignty and summoned the Israeli ambassador against the backdrop of its attacks on a sovereign country. In addition to that, the call for a summit in Iran to support Syria and defend its unity and sovereignty is the most important proof of the deep relationship that exists between Tehran and Damascus, which more than 1,500 Israeli incursions could not weaken.

It is also legitimate for the United States to be dismayed by the possibility of Russia buying modern drones after China refused to be the supplier in order to avoid Western sanctions. Thus, Moscow went towards another allied country that manufactures and produces all kinds of drones: Iran. The war in Ukraine has left great lessons for the Russian military to adapt to new war needs and renew itself to meet the challenges of new weaponry and combat demands.

The defiant alliance against U.S. hegemony has come to the fore. It is gradually working to strengthen itself and bring together countries challenging U.S.-led global unilateralism. To enhance this emerging front, the world could witness Iran joining the BRICS alliance, which includes Brazil, Russia, China, India and South Africa, who enjoy enormous economic power.

It is the beginning of multipolarity, where the battle is expected to become more violent the more the United States believes that powerful fronts will challenge it, confront it with solid allies and remove it from power. The Jeddah summit demonstrated strength and will, no longer completely under the control of the West and not producing tension, but with a determination to build a more robust Middle East region that is not dominated by crises, wars and power struggles over bloody decades.

A long war is coming, but it is a different kind of war, no less intense than a violent military one.