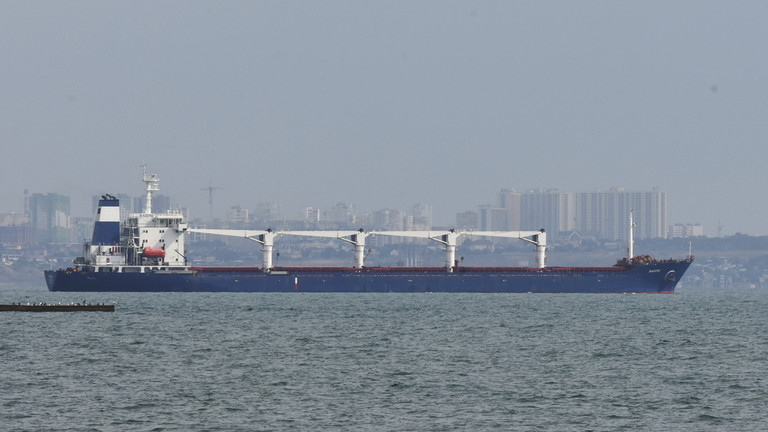 By making accusations about grain ‘stolen’ by Russia, Kiev makes Lebanon a target of US-led pressure.

A Syrian-flagged ship named the Laodicea that docked in the Lebanese port of Tripoli was detained last Saturday, preventing desperately needed flour and barley from reaching people in the Middle East. The move came after Western threats against Beirut and unsubstantiated claims from Kiev that the cargo was stolen from Ukraine. The ship, which has been on a US blacklist since 2015 for allegedly carrying shipments from sanctioned Crimea, is now under investigation.

On Friday, allegations emerged in Western media, citing the Ukrainian embassy in Beirut, that “stolen” flour and barley had been transferred to the Lebanese port of Tripoli and that Kiev had warned the Lebanese government against buying the grain. The news was said to have sparked protests from Western governments “warning” Lebanon’s Foreign Minister, Abdallah Bou Habib, over the allegedly stolen cargo. It later turned out that Kiev possessed no evidence that the flour and barley aboard the ship was from Ukraine. Despite this, Lebanon has now seized the ship and will act according to legal proceedings on the issue, after reported Western pressure.

The Ukrainian embassy in Beirut told Reuters that “the ship has traveled from a Crimean port that is closed to international shipping, carrying 5,000 tonnes of barley and 5,000 tonnes of flour that we suspect was taken from Ukrainian stores,” without presenting evidence to support the claim. An official from a private firm responsible for the import of the grain, Loyal Agro Co LTD, based in Turkey, not only denied that the goods were Ukrainian, but also clarified that the ship was carrying 8,000 tonnes of flour and 1,700 tonnes of barley in total. The vessel was also said to have been seeking private buyers in Lebanon, not a sale to the Lebanese government, and was destined to travel on to Syria after its stop in Tripoli.

Additionally, the Russian embassy in Beirut said that it had “no information regarding the Syrian vessel or a cargo brought to Lebanon by a private company.” An official at the Lebanese port authority also stated that there was “nothing wrong” with the cargo aboard the ship. None of this however, was enough to prevent the issue being pursued and for Lebanon to be threatened.

What makes this issue troubling, is that – without evidence – Western nations and Kiev can openly pressure Lebanon to keep much needed supplies away from its people, in this case potentially forever and for at least 72 hours under detention. The country is currently suffering its worst ever economic collapse, enduring shortages in food, medicine, electricity and essential goods. According to some UN estimates, some 78% of the Lebanese population now live in poverty. The food shortage has led to long queues at bakeries, sometimes resulting in gunfire and brawls between people fighting over the limited supply of bread. The Ukraine crisis has made Lebanon’s predicament even tougher, with a lack of flow of supplies from Ukraine and difficulties bringing in Russian goods due to sanctions. The Western “Caesar Act” sanctions against Syria have also made the situation even worse, as Lebanon has historically benefited greatly from its bigger neighbor.

What Kiev is doing, by threatening the future of bilateral relations between Lebanon and Ukraine over this issue, could be interpreted as blackmail. Ukraine has 20 million tonnes of wheat that it still hasn’t exported and a severing of relations with Beirut would mean that Lebanon could potentially miss out on acquiring it during a food shortage. The Lebanese government is clearly in a weak position and Kiev, backed by the power of NATO, is now attempting to bully Beirut over unsubstantiated claims that are denied by all sides, notwithstanding that officials won’t even state the allegation with certainty.

Another issue here is the double-standard at play, whilst Western nations suffer economically themselves, there is no hesitation at sending billions of dollars in aid to Ukraine every other week. Yet when it comes to simply amending sanctions, after pledging to do so, in order to allow Egypt to send gas to ease the energy crisis in Lebanon, Washington still refuses to allow it, a year later.

Instead, based upon unsubstantiated claims, Lebanon is forced to suffer even more by having basic food supplies dangled over its head. Whilst the West acts holier-than-thou on the issue of unsubstantiated claims of Ukraine’s grain being sold by private firms in Lebanon, it seemingly forgets that the US illegally occupies neighboring Syria’s most fertile agricultural lands, in addition to the majority of its oil and gas fields.

America has repeatedly been accused of smuggling Syrian grain and oil into Iraq, resources which should belong to the Syrian government and could be part of the answer to Lebanon’s current shortage.

Robert Inlakesh is a political analyst, journalist and documentary filmmaker currently based in London, UK. He has reported from and lived in the occupied Palestinian territories and currently works with Quds News. Director of ‘Steal of the Century: Trump’s Palestine-Israel Catastrophe’.