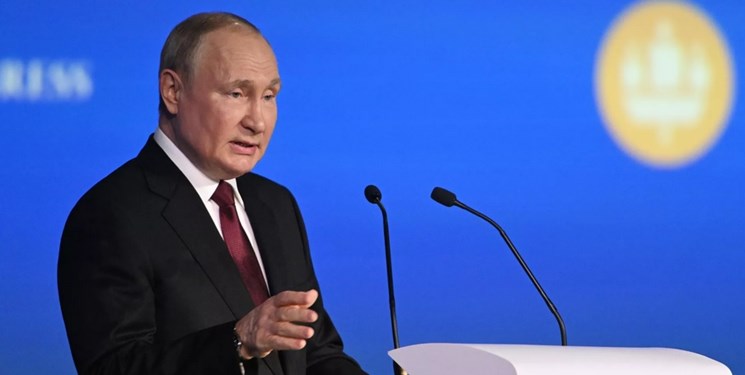 TEHRAN (FNA)- Addressing the St. Petersburg International Economic Forum (SPIEF), Russian President Vladimir Putin stated that the unipolar world has come to an end despite all of its beneficiaries’ attempts to preserve it at any cost.

The president added that following the end of the Cold War, the US declared its national interests to be “sacred” and not to be undermined, Sputnik reported.

He went on to stress that the so-called “golden billion” countries still believe that they are superior and consider the rest of the world to be their colonies. He added that the West’s ruling elites live in a dream world and refuse to see global changes taking place.

“Over the past decades, new powerful centres have been formed on the planet […] each of them develops their own political system and public institutions, implements their own models of economic growth, and, of course, has the right to protect themselves, to ensure national sovereignty. We are talking about real processes, about truly revolutionary, tectonic changes in geopolitics, global economy, the technological sphere, in the entire system of international relations,” he added..

Putin accused Western countries of deliberately undermining the foundations of international order to satisfy their geopolitical illusions. He noted that business reputations and trust in currencies were undermined by their actions. The president also pointed out that the US can steal any person, group or state’s money simply over something Washington did not approve of.

The Russian president criticised the European Union over the decision to impose anti-Russia sanctions, calling it “crazy” and “not well thought out”. Putin said that their goal was to crush the Russian economy in one go, but that they have failed to achieve this.

Instead, EU politicians delivered a serious blow to their own economies, prompting high inflation, the president stressed. He estimated the costs of the “sanctions fever” to be around $400 billion this year alone and noted that the measures will become a burden on regular people’s shoulders.

The Russian president stated that the EU has lost its political sovereignty as its elites are dancing to another country’s tune, even if it damages their own European populations and business interests. Putin predicted that this will result in deepening financial inequalities and social divisions in European societies. It is possible that it will eventually lead to a surge of radicalism and a change of elites in the bloc.

Putin added that global price increases and problems in the energy sphere are the direct results of faulty policies by the US and the EU. The president dismissed the terms “Putin’s tax” and “Putin’s inflation” used by Western politicians, specifically US President Joe Biden, to explain soaring fuel and consumer prices. The Russian president alleged that only uneducated people would believe the tales that Russia’s actions in Donbass caused prices to grow.

At the same time, Putin stressed that Western countries’ forecasts about the grim prospects of the Russian economy failed to materialise.

“It is clear why they waged this propaganda campaign, what all these spells about 200-to-1 ruble-dollar exchange rates and claims that our economy would collapse were all about. All this was – and remains – a tool in the information warfare, an attempt to put psychological pressure on Russian society,” he added.

He underscored that despite sanctions, foreign pressure and Russia’s strategy to replace foreign imports with domestic manufacturing, the Russian economy will never become an autarky – an isolated economy with no or limited foreign economic ties.