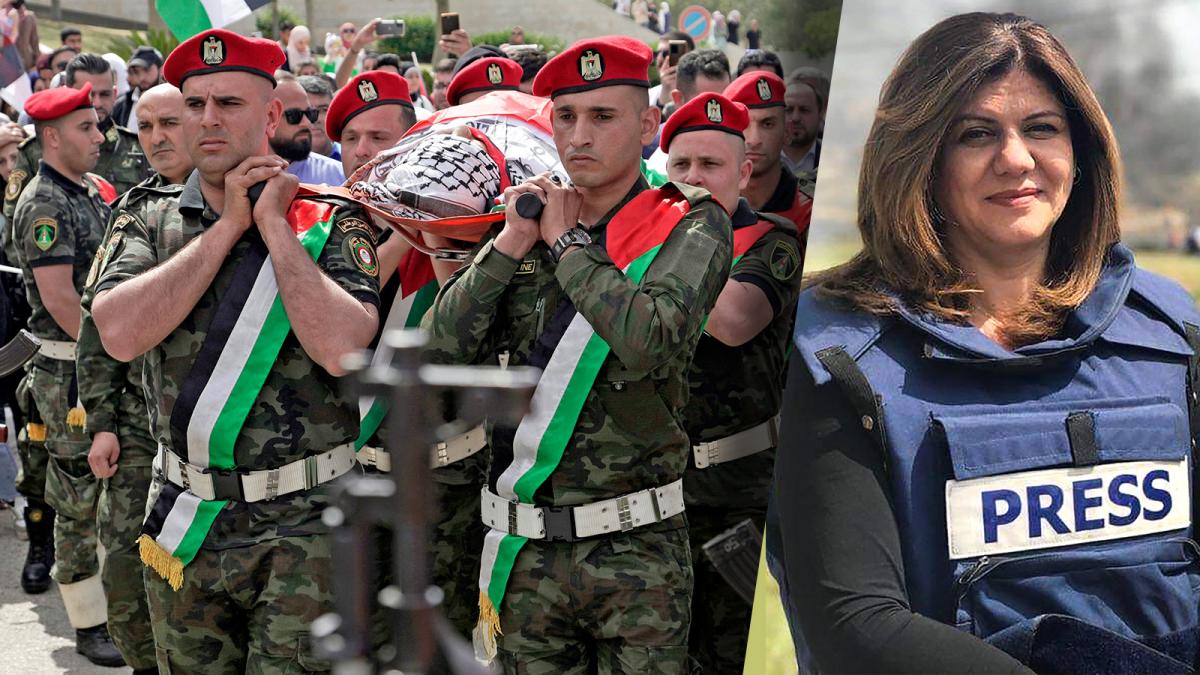 Thousands of Palestinians in the occupied West Bank joined the funeral procession of murdered Al Jazeera journalist Shireen Abu Aqla Nasri on 12 May, one day after she was shot in the head by Israeli soldiers.

Her funeral procession started from the Istishari Hospital in Ramallah, before arriving at the Palestinian Authority’s (PA) presidential compound, where President Mahmoud Abbas bid her farewell.

During the ceremony, Abbas said Israel was “fully responsible” for Abu Aqla’s death.

Her body will make its way to Sheikh Jarrah in occupied East Jerusalem, where her family lives, before being laid to rest on 13 May.

Abu Aqla’s colleagues, who also came under fire on 11 May while covering Israeli raids on Jenin, said the occupation troops deliberately targeted the senior Al Jazeera correspondent, despite her wearing a bulletproof vest clearly labeled “PRESS.”

“The [bullet] that killed Shireen was intended to kill her because he shot the bullet at an area of her body that was not protected,” fellow journalist Shatha Hanaysha said.

Hanaysha also highlighted that the Israeli snipers who opened fire could clearly see that they were journalists.

In response to the accusations, Israeli officials initially tried to dodge the blame for the murder, instead blaming Palestinian factions.

“There is a good chance that armed Palestinians, who fired widely, are the ones who led to the unfortunate death of the journalist,” Israeli Prime Minister Naftali Bennett told reporters hours after the murder.

However, later in the day, Lieutenant General Aviv Kochavi said it was “unclear” who fired the shot that killed the journalist.

“At this stage, we cannot determine by whose fire she was harmed and we regret her death,” the Israeli officer told Hebrew media.

Israeli Defense Minister Benny Gantz also struck a more cautious note, saying: “We are trying to figure out exactly what happened… I don’t have final conclusions.”

For their part, the PA has rejected a US-backed call for a joint investigation into the murder with Tel Aviv.

“Israel has requested a joint investigation and to be handed over the bullet that assassinated the journalist Shireen, we refused that, and we affirmed that our investigation would be completed independently,” Palestinian Civil Affairs Minister Hussein al-Sheikh said on 12 May.

The official also added that all evidence and witness statements confirm that the Palestinian-American journalist was assassinated by Israeli special units.

As international condemnation grows, the EU and UN have joined calls by right groups for an independent investigation into Abu Aqla’s murder.

The office of UN Secretary General Antonio Guterres issued a statement saying he was “appalled by the killing of Shireen Abu Aqla, a Palestinian-American reporter for Al Jazeera TV.”

And the lead Spokesperson for Foreign Affairs and Security Policy of the EU, Peter Stano, said that it is significant that a “thorough, independent investigation clarifies all the circumstances of these incidents as soon as possible and that those responsible are brought to justice.”

Rights groups, lawyers and Palestinian authorities, however, say they do not expect a credible investigation into the killing by Israel, which has a track record of not thoroughly investigating crimes committed by the Israeli army.

The IFJ has repeatedly condemned Israel’s deliberate targeting of journalists and media facilities in occupied Palestine. According to WAFA, least 55 Palestinian journalists have been killed since 2000, with no one ever having been held responsible.