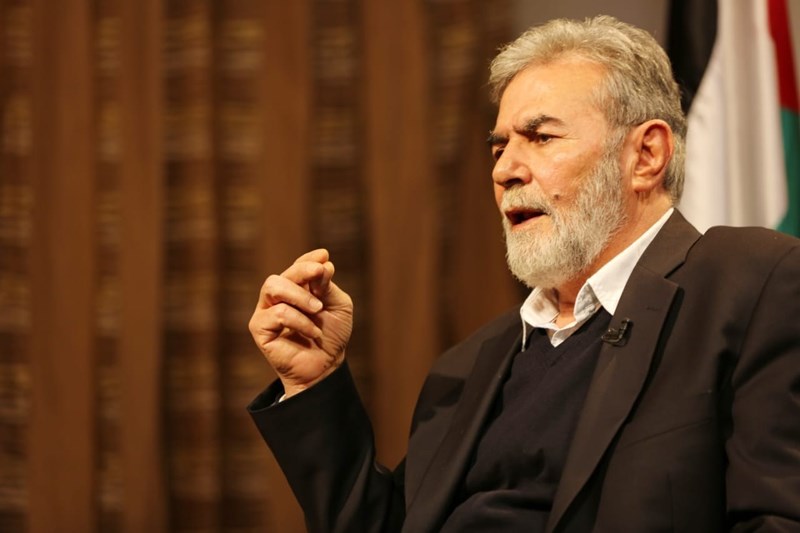 Speaking during the Al-Quds Day festival in the Gaza Strip, PIJ chief Ziyad Al-Nakhalah affirms that Al-Quds was the epicenter of the Palestinian cause, and “we must fight for its liberation”.

The Palestinian resistance is growing stronger, and the battle of Seif Al-Quds has proven its strength and ability to shift the balance of power, Palestinian Islamic Jihad Secretary-General Ziyad Al-Nakhalah said Thursday during the Al-Quds Day festival in the Gaza Strip.

The festival organized by the Palestinian Committee to commemorate the International Day of Al-Quds kicked off Thursday in the Gaza Strip, and Al-Nakhalah hailed the Palestinian prisoners, Al-Aqsa, the West Bank, Jenin, and the martyred former Quds Force Commander-in-Chief, Hajj Qassem Soleimani.

“Our people are still resisting and confronting [the Israeli occupation] despite the aggression, and they will not be broken nor give up; they will keep resisting,” the Palestinian official underlined.

“We are undergoing a harsh, resolute historical turning point that is filled with many challenges and threats, and its goal is to eliminate our cause,” Al-Nakhalah said, warning against the plans of the Israeli occupation, “because it sees, alongside other countries, Gaza as a ticking time bomb.”

“The unity and cooperation of Arab resistance and is the main pillar in defeating the Israeli project,” he explained, adding that the resistance must work to liberate the Palestinian prisoners and stand with them by all means,” he concluded.

Imam Khomeini, Hamas politburo member Rawhi Mushtaha said, had called on the Ummah early on to rectify its causes when he initiated Al-Quds Day, for Al-Quds is a central, unifying cause.

“The solution lies within our unity, and we must commit further to resistance in order to restore the rights of the Palestinian people and liberate the land,” the Hamas official underlined, noting that the Israeli occupation fears the unity of the Palestinians the most, which “must be achieved.”

“Gaza is ready in every place and time to support the Palestinian people, starting from Al-Quds[…] and the resistance is the only path [for liberation] and it is what is keeping heads high up in all of Palestine,” the Hamas official stressed.