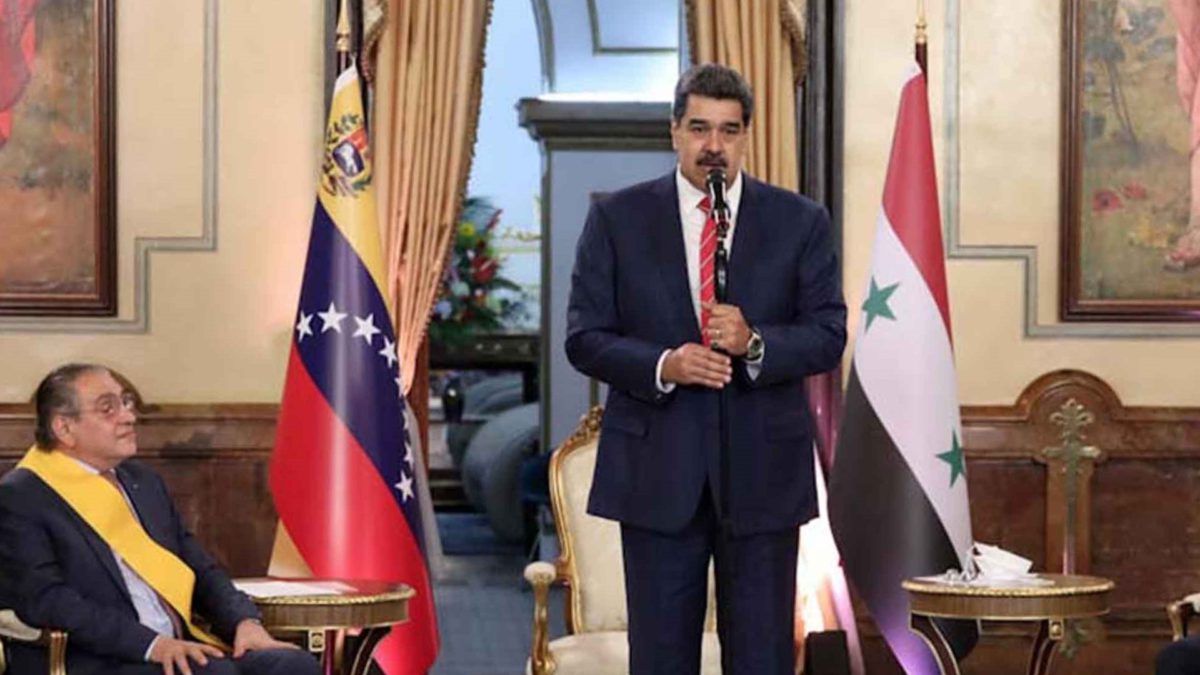 On 18 January, Venezuelan President Nicolas Maduro announced his plans to visit Syria “soon” while also calling on the international community to respect Syria’s right to reconstruction and prosperity, and emphasizing that the Levantine nation is the cradle of several cultures.

Maduro also proposed the idea of holding an economic and investment exhibition in Damascus with the participation of Venezuelan businessmen and the Syrian community in Venezuela as a way to assist in the reconstruction of the war-torn country.

During his speech, Maduro tasked Minister of Foreign Affairs Felix Plasencia with preparing the summit and inviting businessmen.

He made the remarks during a special ceremony to award Syria’s outgoing Ambassador to Caracas, Khalil Bitar, the Francisco de Miranda First Class Order of Merit on the occasion of the end of his duties.

“Awarding the Order of Merit to Ambassador Bitar reflects the common friendship and mutual admiration between the peoples of Venezuela and Syria, who are anti-imperialist and anti-terrorism, and who aspire to peace for common prosperity and economic growth,” Maduro said.

He went on to add that the Bolivarian Republic “admires the history of the Syrian people and their heroism, determination and struggle against terrorist organizations.”

Maduro commended President Bashar al-Assad for his “heroic stance in leading a historic battle against the US terrorist aggression and its accomplices in the world, and for achieving victory thanks to the help of his allies Russia, China, and Iran.”

For his part, ambassador Bitar thanked President Maduro for awarding him with the highest honor that the Latin American nation offers to non-Venezuelans.

Bitar also shed light on the more than seven decades of diplomatic relations that have linked the two nations together, in particular the cooperation they had under the leadership of the late Venezuelan leader Hugo Chavez, and which has continued with Maduro.

He also noted that Damascus eagerly awaits President Maduro’s visit and the many opportunities offered by “this new phase in advancing bilateral relations.”

Finally, Bitar highlighted the importance of maintaining a close relationship between the two countries as they both struggle “for their just causes and the independence and sovereignty of their countries” in the face of an economic war waged by the US via coercive economic sanctions.