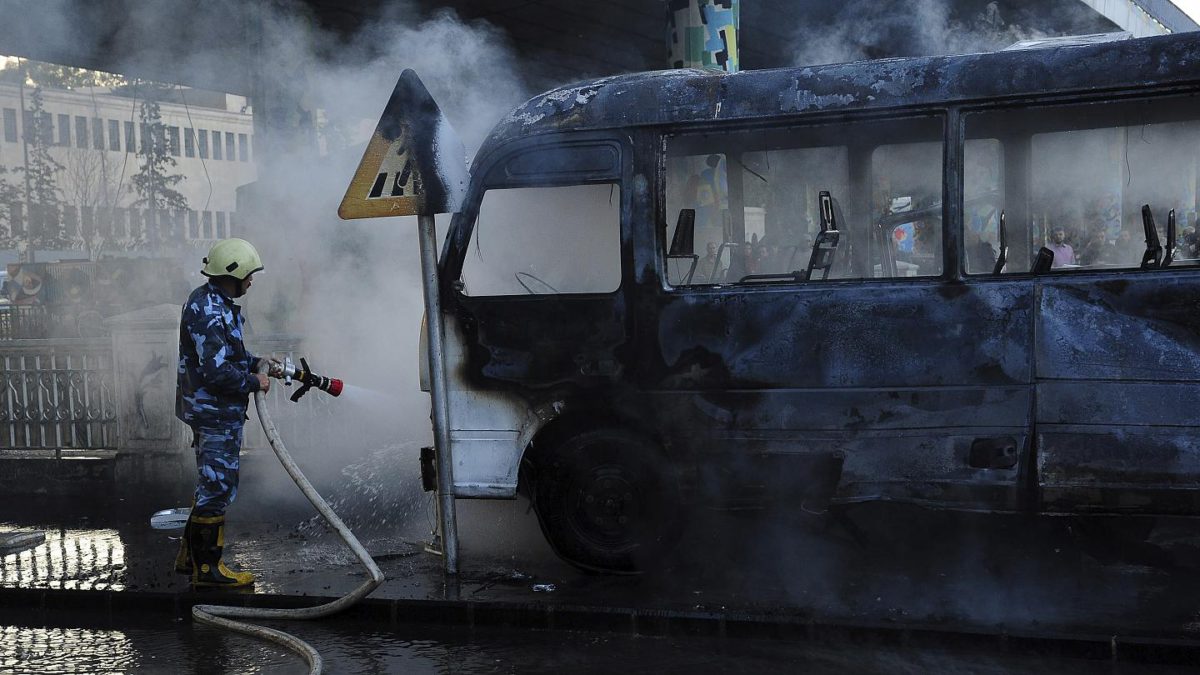 File image. A firefighter extinguishes a burning Syrian army bus after it was bombed by an armed group, in Damascus, Syria, 20 Oct. 2021 (Photo credit: SANA)

Five Syrian soldiers were killed and 20 were injured on 2 January when the bus they were traveling in was hit by a missile launched by an ISIS armed group.

According to a report by local media outlets, the bus was ambushed while traveling through the Al-Badia region just after 7pm local time.

A military official quoted by the Syrian News Agency SANA said that at about 7pm on Sunday, a military bus was hit by a terrorist missile attack, 50 km east of the third station in the Syrian al-Badia region, and that the attacked was carried out by a Daesh-ISIS terrorist group.

He added that immediately after the rocket attack, ISIS members opened fire on the bus using a 23mm caliber cannon.

The past few months have seen a resurgence in attacks by members of ISIS militants targeting Syrian soldiers.

In November 2021, 13 soldiers were killed when a military bus was ambushed by ISIS on the outskirts of the town of  Al-Masrab in the Deir Ezzor governorate.

The government of Syria has been battling several armed groups including ISIS since 2011.

The Syrian government says that most of these armed groups are backed by the Israeli occupation and by western governments led by the United States, which has occupied regions in the north and northeast of Syria.

The regions that the US occupies in Syria are where the majority of Syria’s gas and oil fields are located.

The US claims that it is in Syria to fight against ISIS, but Damascus says the sole purpose of the US occupation of Syria is to overthrow the legitimate government of the country and loot Syrian oil and other resources.

The government of Syria has repeatedly demanded that the US leave its territory. The presence of US soldiers in Syria is a violation of international law due to the fact that Damascus did not authorize their deployment.