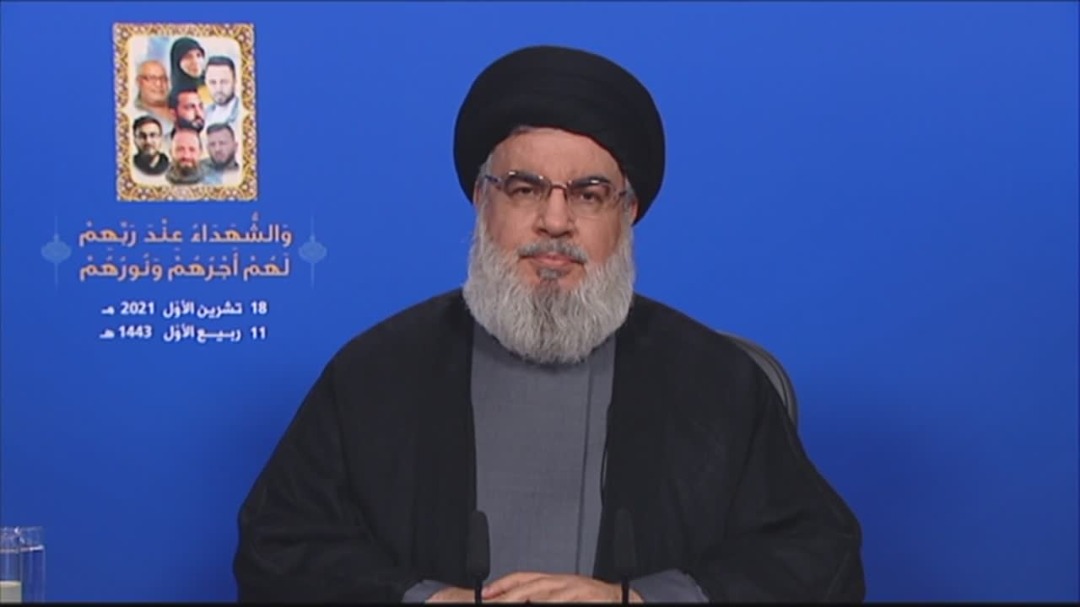 Hezbollah Secretary General Sayyed Hasan Nasrallah on Monday lashed out at the Lebanese Forces militia, advising its chief to abandon attempts to ignite a civil war in Lebanon.

In a speech that basically tackled the latest massacre by the notorious militia in Tayouneh last Thursday, Sayyed Nasrallah warned the head of Lebanese Forces party (LF), even without mentioning his name, against any miscalculation regarding the civil war in Lebanon.

Sayyed Nasrallah in this context, revealed the number of Hezbollah fighters who are ready to defend their country.

“Don’t miscalculate and behave,” Sayyed Nasrallah addressed LF, adding: “Hezbollah has 100,000 fighters who are fully ready to act in case we just point to them to do so.”

The Hezbollah S.G. said the Lebanese security apparatus confirmed that LF militants and snipers were responsible for Tayouneh massacre which killed seven Lebanese civilians during a protest against the politicization of an investigation into Beirut Port.

Sayyed Nasrallah said that the LF has been for long time instigating the Christians in the country, especially residents of Ain Al-Rimaneh and Al-Hadat, against Hezbollah through creating fake enemy of residents in Dahiyeh.

His eminence stressed that Hezbollah, Amal Movement, the entire Shiite sect and Muslims don’t pose a threat to the Christians in Lebanon, but rather the LF poses an existential threat to them.

Sayyed Nasrallah called on state institutions to hold a serious probe into the massacre in Tayouneh, stressing importance of staging another investigation by the Lebanese Army in order to look into the videos circulated by social media showing Lebanese soldier firing at a peaceful protester during October 14 massacre.

On the issue of Beirut Port blast investigation, his eminence stressed that Hezbollah has been keen to reveal the truth in this issue, slamming judges who gave permission to the ship carrying ammonium nitrate to enter Beirut Port several years ago.

Meanwhile, Sayyed Nasrallah praised families of the martyrs who fell in Tayouneh massacre, hailing their patience and wisdom. In this context, his eminence vowed that Hezbollah won’t abandon the martyrs and will go ahead with legal course in a bid to hold the perpetrators accountable.

Sayyed Nasrallah started his speech by congratulating Muslims on the birthday anniversary of Prophet Mohammad (PBUH), announcing that despite pain and grief, Hezbollah will hold a ceremony to mark the occasion next Friday in Dahiyeh.

His eminence praised celebrations held by the Yemeni people on the occasion, as well as stances announced by Ansarullah leader Sayyed Abdul Malek Al-Houthi.

Sayyed Nasrallah, meanwhile, offered condolences over martyrdom of a number of Afghan people in a terrorist attack staged by ISIL terrorists on a mosque in the city of Kandahar.

He also offered condolences over martyrdom of freed prisoner Medhat Saleh, who was killed by Israeli occupation forces few days ago.

The Hezbollah S.G. then get into the main issue of his speech, the massacre committed by Lebanese Forces militants in Tayouneh last Thursday.

Sayyed Nasrallah said that the LF has been instigating against Hezbollah for long time, trying to create a fake enemy to the Christians in Lebanon.

“The Lebanese Forces party wanted to make our people in Ain Al-Rimaneh, Forn Al-Chebbak and Al-Hadat feel concerned and afraid of people of other regions especially in Dahiyeh.”

“This party and its leader (Samir Geagea) aim at presenting themselves as defenders of Christians in Lebanon in order to serve their goals related to political leadership,” he said, noting that the LF leader has been convicted by the Lebanese judiciary over war crimes.

“In the latest years, the Lebanese Forces, and with the support of regional and international powers, has been working to create an enemy to the Christians in Lebanon and to present himself as the defender of this community against this so-called enemy, which is Hezbollah,” Sayyed Nasrallah said, citing schemes to target Hezbollah by the US, ‘Israel’ and some Gulf states.

And to confirm that Hezbollah is being targeted by the LF along with regional and international powers, Sayyed Nasrallah said that the Lebanese Forces chief focused in his remarks following the massacre in Tayouneh on Hezbollah, despite that fact that three of the seven martyrs are supporters of Amal Movement.

“The real program of the LF is to the civil war, for this scheme leads to the displacement of the Christians and then creating a Christian canton which LF chief aims to rule.”

Sayyed Nasrallah noted that the massacre in Tayouneh opens a new chapter of Hezbollah’s way to deal with the local issue.

He said that both Hezbollah and Amal Movement were reassured by the Lebanese Army a night before the massacre over the security situation in the region of the protest near Justice Palace, where the shooting took place.

Commenting on LF leader’s remarks that the Tayouneh massacre was a “mini May 7 events” Sayyed Nasrallah said that such remarks is a clear claim of responsibility of the shooting.

“For those who say that Hezbollah is the enemy of Christians, you can ask the churches which Hezbollah defended in Syria against Takfiri terrorists.”

“When Hezbollah defended its people of the Christians in Syria and the Lebanese border towns against ISIL and Nusra terrorists, the Lebanese Forces party was offering all forms of support to the Takfiris.”

He addressed the Christians in Lebanon by saying: “All those who tell you that Shia and Muslims are an enemy they are fabricating such accusations. The greatest existential threat for you is the Lebanese Forces since this party had allied with the terrorists in Syria.”

Sayyed Nasrallah then pointed to Hezbollah’s behavior towards Christians following the Israeli withdrawal from Lebanon in 2000.

“Hezbollah prevented any of its fighters or fighters belonging to Amal Movement from entering the Christian towns in south Lebanon upon the Liberation in 2000. We even did not harm collaborators with Israeli enemy in that towns, rather we handed them over to the Lebanese Army. This was in a bid to avoid any Muslim-Christian sedition.”

Sayyed Nasrallah then said that Hezbollah, throughout years adopted a policy of openness with political parties, including the Christian powers.

“In February 6, 2006 we held a MoU with the largest Christian party, which is the Free Patriotic Movement (FPM),” Sayyed Nasralah said, noting that the LF was the first side who stand against the MoU between Hezbollah and the FPM.

Sayyed Nasrallah then advised the LF and its leader to abandon the idea of suing discord in a bid to ignite a civil war in Lebanon.

“If you want to prepare for a civil war then have not to miscalculate. Take a note that Hezbollah is made up of at least 100,00 well-trained and experienced fighters whom can act in case Hezbollah’s leadership points to do so,” Sayyed Nasrallah addressed the LF and its chief.

In this context, Sayyed Nasrallah stressed that the Resistance is not weak, but rather is keen to preserve security and avoid sedition.

“Hence, I say to LF and its leader: Don’t miscalculate, behave and take lesson from the wars you had been engaged in.”

Sayyed Nasrallah said that the Lebanese state institution along with religious figures, especially the Christians, “must bear responsibility and stand against this criminal butcher in a bid to avoid civil war and preserve national peace.”

He then stressed importance of launching a serious investigation into the massacre in Tayouneh, noting that the Lebanese Army must also do so regarding a video circulated on social media and shows a Lebanese soldier firing at a peaceful protester during Tayouneh shooting.

In this context, Sayyed Nasrallah warned against any dispute between Hezbollah and the Lebanese Army, stressing that the national army is part of the golden formula aimed at defending Lebanon: Army-People-Resistance.

On the issue of Beirut Port blast probe, Sayyed Nasrallah affirmed that Hezbollah is keen to know the truth behind the tragedy which killed more than 200 Lebanese people and injured thousands on August 4, 2020.

“We won’t take back on this case. It’s a political responsibility to know those who were responsible for this tragedy.”

Several sides contacted Hezbollah and reassured the party that it would not be accused, Sayyed Nasrallah said, noting that those sides also acknowledged that the probe is discretionary.

“The way the probe is going on won’t lead to reveal truth. The judges who gave permission to the ship carrying the ammonium nitrate to enter Beirut Port bears responsibility of the tragedy in the port.”

Meanwhile, Sayyed Nasrallah hailed patience and wisdom of Tayouneh massacre’s martyrs, vowing that the blood of those martyrs won’t go in vain.

His eminence also equated Tayouneh martyrs to those of the Resistance who were martyred in defending Lebanon.

“We have to preserve goals achieved by the Resistance and its martyrs, on top of which are security and national peace,” Sayyed Nasrallah addressed martyrs’ families as saying.

Addressing the Resistance supporters, Sayyed Nasrallah stressed that this stage prompts more patience and insight in a bid to avoid any form of infighting in the country. In this context, his eminence noted that igniting a civil war is the “last card played by our enemies.”