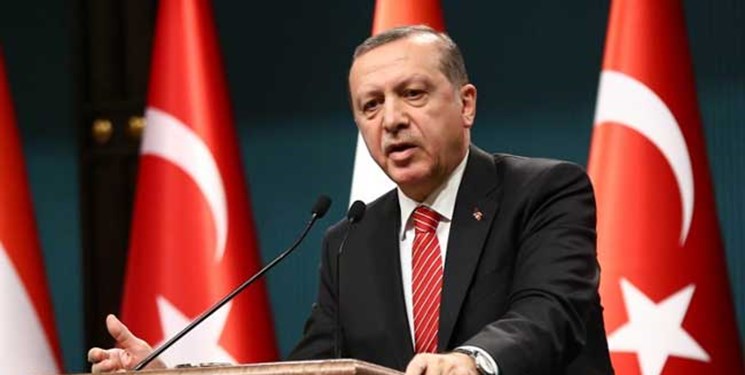 “We have run out of patience regarding certain areas in Syria that have been the source of terrorist attacks on our country. We are determined to eliminate the threats originating from those areas,” Erdogan said Friday, referring to Kurdish-held city of Tel Rifaat, located near the city of Azaz in the country’s Aleppo Province, where the attack took place earlier this week, presstv reported.

On Sunday, a guided missile was launched from Tel Rifaat by US-backed Kurdish People’s Protection Units (YPG) militants, killing two Turkish police officers and wounding two others, according to Ankara.

Erdogan’s threat came as two unknown Turkish officials also said Ankara was preparing for possible military action against the YPG in northern Syria if talks on the issue with the United States and Russia failed.

“It is essential that the areas, notably the Tel Rifaat region from which attacks are constantly carried out against us, are cleansed,” one senior official was quoted as saying by Reuters.

The official added that the military and national intelligence agency MIT was making preparations, without providing any details about the time and nature of the Turkish military action.

“The decision for this has been taken and the necessary coordination will be done with particular countries. This subject will be discussed with Russia and the United States,” he stressed.

The officials said Erdogan would discuss the issue with US President Joe Biden at a G20 summit of the world’s major economies in Rome at the end of October.

Another Turkish official said the YPG must be pushed back at least 30 kilometers, claiming that Russia was completely in control of the areas from which recent attacks had come.

Erdogan will speak with Russian President Vladimir Putin after the talks with Biden, the official said.

“If there is no outcome from diplomacy and the PYD does not leave these areas, an operation appears unavoidable,” he said, using the abbreviation for the YPG’s political wing and referring to Tel Rifaat and “several other locations”.

In separate agreements with Moscow and Washington in 2019, Turkey halted its incursion in Northeast Syria in exchange for the withdrawal of YPG militants 30 km South of its border.

On Monday, shells believed to have been fired from the YPG-controlled area East of Tel Rifaat exploded in the Turkish town of Karkamis, across the border from Syria’s Jarablus, causing slight damage.

Speaking at a news conference in Ankara, Foreign Minister Mevlut Cavusoglu said Turkey would “do what is necessary for its security” after what it described as a rise in cross-border attacks by the Kurdish militants.

Cavusoglu held the US and Russia responsible for the attacks, vowing that Turkey “will do whatever it takes to cleanse the terrorists”.

In 2019, Turkish troops carried out a cross-border offensive in Northeastern Syria — the third such operation since 2016 — in an attempt to clear US-backed YPG Kurdish militants from border areas and establish a “safe zone” there.

Ankara views the YPG as a terrorist organization tied to the homegrown Kurdistan Workers’ Party (PKK), which has been seeking an autonomous Kurdish region in Turkey since 1984.

The Kurdish-led administration in Northeastern Syria says the Turkish offensive has killed hundreds of civilians, including dozens of children since it started.

The Damascus government has repeatedly slammed violations of the Arab country’s sovereignty, calling on the Turkish military to withdraw its forces and end its occupation of the Syrian soil.

Syria has been grappling with foreign-sponsored militancy since 2011. Turkey has been supporting a number of militant groups operating to topple the government of President Bashar Al-Assad.