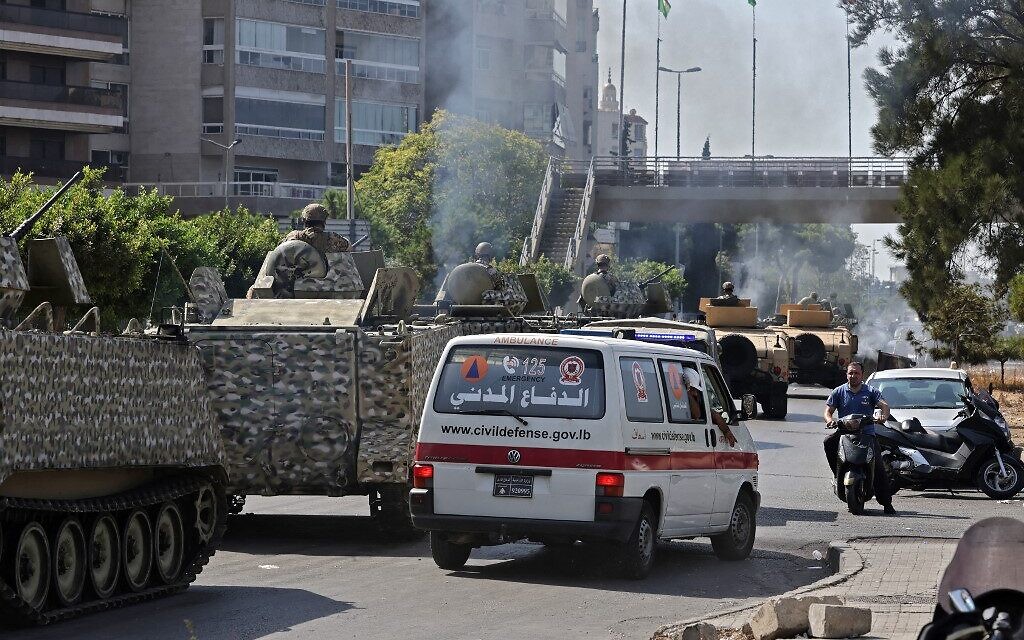 The Lebanese Armed Forces (LAF) forces have identified the instigators and participants of a deadly massacre in the Tayouneh neighborhood of Beirut, and say at least nine people have been detained over the incident so far.

“The army raided a number of places in search of the shooters, arrested nine people from both sides, including a Syrian, and began investigations into the detainees under the supervision of the competent judiciary,” a statement issued by the Lebanese Armed Forces states.

At least six people were killed and over 60 injured on 14 October after snipers opened fire on a peaceful demonstration in Beirut.

Reports also indicate that an armed cell of the far-right Lebanese Forces (LF) party was arrested in Mount Lebanon soon after the shooting, while at least three LF commanders have been named as orchestrating the ambush, including the head of security for party leader Samir Geagea.

Earlier in the day Hezbollah and Amal Movement officials accused groups affiliated with the far-right LF of being responsible for Thursday’s massacre.

“Within the frame of civilized and peaceful expression of a clear political position from the course of the investigation into the port crime, we organized today a symbolic demonstration outside the Justice Palace in Beirut, where participants were subject to an armed attack by groups from the Lebanese Forces party that deployed in neighboring streets and on rooftops, and engaged in direct sniping activity and intentional killing,” the joint statement by Hezbollah and the Amal Movement reads.

The resistance parties also called on the armed forces to intervene quickly and detain those responsible, while calling on supporters to remain calm and “not be drawn to malicious discord.”

The LF is a Maronite Christian political party that was formed as an Israeli-backed militia group during at the start of the Lebanese Civil War to oppose the Lebanese National Movement (LNM), an umbrella alliance of leftist parties allied with the Palestine Liberation Organization (PLO).

Soon after Thursday’s massacre, LF lawmaker Imad Wakim took to Twitter to claim that the “confrontation” had taken place between “Hezbollah and the rest of the Lebanese who are free from all sects.”

Meanwhile the leader of the far-right party has rejected the accusations and redirected blame at Hezbollah leader Sayyed Hassan Nasrallah.

For his part, Lebanon’s Prime Minister Najib Mikati has declared 15 October as a national day of mourning.

Before the snipers opened fire on the crowd of protestors, hundreds had gathered near the Beirut City Court building demanding the resignation of Judge Tarek Bitar, who is the lead investigator into last year’s catastrophic blast at the Port of Beirut.

Lebanese resistance movements accuse Bitar of being a US pawn who has politicized the investigation to target Hezbollah, and have made numerous calls for his resignation.

According to an exclusive report by The Cradle, US officials have been deeply involved in the Beirut Port blast investigation, with Judge Tarek Bitar receiving several visits from US embassy staff that are being disingenuously portrayed as “routine reviews” because one of the detained suspects holds US citizenship.

Last month US ambassador Dorothy Shea was named as being part of a plot to frame Hezbollah with possessing 20 tons of ammonium nitrate, the volatile explosive that caused last year’s blast.

However, the shipment of ammonium nitrate seized by authorities last month was later linked to LF member Ibrahim Sakr, who has reportedly been buying and selling the dangerous substance for years.