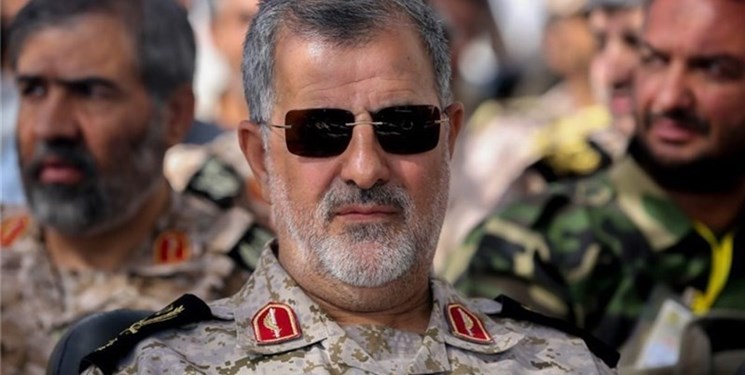 General Pakpour made the remarks in a ceremony to commemorate the martyrs during the Sacred Defense (Iraqi-imposed war against Iran 1980s) in Sanandaj city in Western Iran on Wednesday.

“We see some movements in the Iraqi Kurdistan region, and terrorist and anti-Islamic Revolution groups have set up bases, something that we have previously said we will not accept and we will encounter it with might,” he said.

General Pakpour further advised the Iraqi and Kurdistan Region authorities to expel elements and members of terrorist and anti-Islamic Revolution groups from Northern Iraq, warning that “if that demand is not met, we will act in accordance with the duty to destroy their bases and headquarters”.

This is the second time that the IRGC Ground Force commander warns the Iraqi and Kurdistan Region authorities over the presence of the terrorist groups on their soil after his warning on September 6.

A senior commander of the Islamic Revolution Guards Corps announced last week that the IRGC forces have attacked and destroyed 4 bases of the anti-revolutionary groups stationed in Northern Iraq.

“Anti-revolutionary groups have been organized by the intelligence services of hostile and foreign countries, and even certain Arab states, in Northern Iraq to be used in line with their goals and create obstacles on the way of the Islamic Republic,” Deputy Commander of the IRGC Hamzeh Seyed al-Shohada base in Northwestern Iran Brigadier General Majid Arjmandfar told reporters.

“These anti-revolutionary groups were stationed in a short distance from the Iranian borders, and necessary warnings were given to the Iraqi government, officials and managers in the Northern parts of the neighboring country.”

“We had said and warned that if the slightest mistake is seen from these hostile groups, they will receive a harsh response, which led to the destruction of the four bases of these anti-revolutionary groups,” General Arjmandfar said.

He underlined that anywhere these counter-revolutionary groups are stationed is considered as enemy territory by Iran, and said, “We proved this in the recent attack and we targeted all positions, command centers and the ammunition dumps they had.”

The IRGC had said in a statement that last week that their forces had targeted and destroyed terrorist hideouts in the Iraqi Kurdistan region.

A statement by the IRGC’s Hamzeh Seyed al-Shohada Base in West Azerbaijan Province in Northwestern Iran said that “four bases of the anti-revolutionary groups were targeted and destroyed by precision-striking weapons in response to their movements on the border of our country with Northern Iraq”.

The statement added that anti-Iran groups have been organized and sponsored in the Northern region of Iraq by the foreign and hostile intelligence services and some Arab states to use them in line with their goals and create obstacles on the way of the Islamic Republic of Iran.

In relevant remarks last week, Chief of Staff of the Iranian Armed Forces Major General Mohammad Hossein Baqeri warned of the country’s continued attacks against the hideouts of anti-revolutionary groups in the region, specially the Iraqi Kurdistan region.

General Baqeri made the remarks, referring to the recent IRGC operations against the terrorist and anti-revolutionary groups in the Iraqi Kurdistan region,

“The officials of this region and the Iraqi government should take action to confront these groups,” he added.

General Baqeri warned the Americans that their bases in the region should also be abolished and not be used as an anti-revolutionary center, and said, “We will continue our operations against the anti-revolutionary groups and we will not tolerate any mischiefs at these borders.”

“Confronting these groups is our right based on the UN Charter,” he stressed.

General Baqeri said that the Iraqi Kurdistan region officials should not allow the armed anti-revolutionary groups which are affiliated to the US and Israel to have military bases and TV and radio stations and attack the Iranian borders, and warned, “The (Iranian) Armed Forces will annihilate these groups.”

Earlier this month, the IRGC attacked the positions of terrorists in the Iraqi Kurdistan region with artillery fire, missiles and drones.

The missile units of the IRGC Aerospace, with the participation of the IRGC Ground Forces’ UAV unit carried out successful operations, and pounded the headquarters of terrorists in Northern Erbil, a meeting of one of the evil and criminal groups and a training center belonging to the foreign-backed terrorists with 7 short-range missiles, the IRGC said in a statement on Thursday.

It added that the operations came after a warning to the Kurdish authorities in Northern Iraq and in response to the infiltration attempts by terrorist teams belonging to the foreign-sponsored terrorist groups stationed in Northern Iraq, which endangered the security of the Western provinces of Iran.

The statement said based on concrete evidence and reports, dozens of the terrorist “chieftains” and their elements were killed or wounded in the attack.

The operation against KRG-based terrorists came few days after General Pakpour cautioned the local residents of the Kurdistan Region in Northern Iraq to stay away from the strongholds of terrorists, because Iran is planning crushing military attacks against terrorist groups which foment insecurity at the bordering areas.

During a visit to the IRGC military bases in Iran’s Northwestern border areas, General Pakpour gave a warning to the armed terrorist groups which take advantage of the Northern parts of Iraq in the Kurdistan Region to upset the security of Iran’s bordering areas.

“We cannot tolerate the continuation of such conditions and will give the necessary response to the terrorists,” he warned.

Pointing to the circumstances in that region and the possibility of a “decisive and crushing” response to the terrorist groups that are affiliated with the enemies of the Islamic Republic and have taken shelter in the Northern areas of Iraq, General Pakpour asked the local residents in those regions to stay away from the strongholds of the terrorists to be safe from any harm.