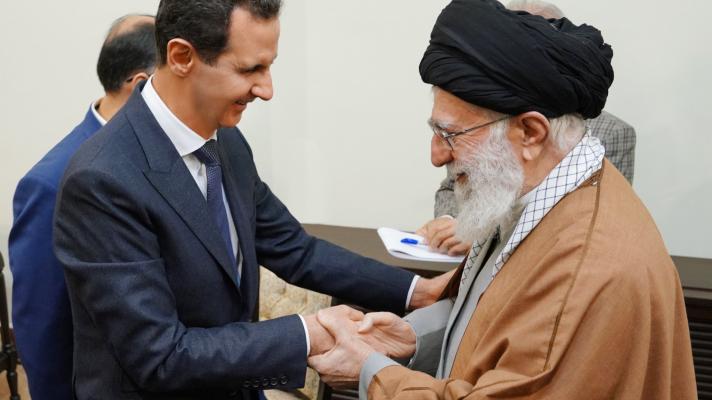 The domino effect of Iranian tankers carrying gasoline to Lebanon via Syria generously affected and expanded Hezbollah’s influence in Lebanon and extended to the United States, Russia and several Arab states. The consequences have accelerated important regional and international issues, putting them forcefully on the discussion table and imposing a review of U.S. policy in West Asia, particularly in Syria. Western countries, including the United States, have begun to rethink and reconsider their current reticence about their relationship with Syria and their return to the Arab League and the international community. The goal – or perhaps the desire – is to offer President Bashar al-Assad the opportunity to reassess his global and regional relations and eliminate the exclusive role of Iran and Russia in the Levant.

Numerous developments have taken place in West Asia and New York in recent months. Undeclared meetings in Baghdad between Saudi Arabia and Iran, Jordan and Iran, and Egypt with Iran helped break the ice between these regional countries and discuss important issues of great interest. In addition, the Iraqi summit allowed Saudi Arabia, Qatar, Iran, Kuwait, Egypt, Jordan and France to meet and warm their relations, creating a greater rapprochement between the regional states. Iraq is playing a positive and important role where all countries can meet and discuss their differences. There were also important meetings between Jordanian King Abdullah with President Joe Biden in Washington and President Vladimir Putin in Moscow, and Syrian President Bashar al-Assad’s meeting with President Putin to discuss the unification of Syrian territory. Finally, the expected visit of Turkish President Recep Tayyip Erdogan to Moscow and New York. These meetings opened the door to the next stage, paving the way for Syria’s return to the regional and international sphere.

Indeed, the most noteworthy development was the Jordanian king’s statement from Washington that “President Bashar al-Assad remains in power and a way must be found to regain dialogue with him.” This does not mean that Jordan has ceased its relationship with Syria over the past decade. The Jordanian embassy never closed its doors in Damascus nor the Syrian embassy in Amman, even though Jordan hosted the Military Operations Command (MOC) room. The MOC hosted Arab and Western military commanders, including Americans, to run sabotage and attack operations inside Syria, with the aim of taking down the Syrian president’s government and creating a failed state in Syria. It has supported and trained militants and jihadists in Jordan, including the Al Qaeda organizations, knowingly with the complicity of the US administration.

Throughout the decades of war in Syria, contacts between Amman and Damascus at the political and security level did not cease, although they varied in intensity. The last significant official communications consisted of two things.

The first was a call between Jordanian Interior Minister Mazen al-Faraya with his Syrian counterpart, Muhammad al-Rahmoun. The two ministers said they had agreed to coordinate truck transit between the two countries, which would mean that the U.S. had to exclude Jordan and Syria from sanctions imposed through the “Caesar Protection of Civilians Act.” Syrian trucks will be able to cross the borders without unloading their cargo onto other trucks on the Jordanian side of the borders. This will significantly reduce the Syrian cost, open the way for Syrian goods to many countries and bring much needed foreign exchange.

The second official high-level contact was the visit of Syrian Defense Minister and Deputy Prime Minister Ali Ayoub to Amman and the meeting with Jordanian Chief of General Staff Major General Yousef Al-Hunaiti, the first official meeting at this level after ten years of war in Syria.

There is no doubt that the United States opened the door to Syria’s return to Lebanon when it agreed to reactivate the pipeline that transported Egyptian gas to Lebanon via Jordan. This pipeline was offered as an alternative in a desperate attempt to limit Iranian diesel and gasoline coming into Lebanon via Hezbollah. U.S. Ambassador to Lebanon Dorothy Shea announced the gas supply decision in reaction to the announcement by Hezbollah Secretary General Sayyed Hassan Nasrallah. Sayyed Nasrallah promised to supply the country with Iranian fuel through Syria to break the unannounced U.S. blockade and meet the needs of the Lebanese people. Lebanon, thirsty for oil supplies (the loss of which has crippled the life cycle of the country, which is suffering an unprecedented economic crisis), blessed Iranian oil as it fell like manna on the Lebanese population. Iran and Hezbollah’s popularity soared and was hailed by allies, friends and (many) enemies alike.

However, Iranian fuel is not the only problem facing the United States and Arab countries. They are very concerned about Syria remaining within the Iranian sphere of influence. Iran gained unprecedented popularity in Syria due to Washington’s policy, which sought to create a failed state in Syria and remove President Assad from power. Moreover, Iran gained more prestige when the United States was unable to destabilize Syria, Iraq and Lebanon. The U.S. administration thought that by imposing harsh sanctions on Syria and preventing any rapprochement between Damascus and other regional and Western capitals, it could pressure President Assad forcing him to submit to its terms.

It seems that Joe Biden’s administration is beginning to assess things more realistically, as the Jordanian king expressed after meeting with Biden. It is no coincidence that King Abdullah is saying from Washington that Syria’s return and dealing with Assad, a taboo subject for previous U.S. administrations, is necessary. It is indeed a small but significant step, even if it does not mean that the U.S. will soften its relationship with Syria any time soon. Instead, the return of Arab and Western countries’ relationship with Assad is preparation for the public to recognize that the Syrian president is the elected leader of his country, something that the countries involved in the last decade of war can no longer ignore.

The Syrian president told his many regional and Western official visitors that “the United States has never broken its security relationship with Syria. However, in Syria we reject any political dialogue unless U.S. occupation forces withdraw from the active northeast region.”

The United States and many European states have maintained a security and anti-terrorism relationship with Syria (France, Italy, Germany and others). However, Syria has stipulated that all European delegations must reopen their embassy doors before engaging in political relations. The government in Damascus is today stronger than ever, especially as the south has fully returned to the control of the Syrian army.

Indeed, in recent weeks, Syria liberated Daraa and Tafas, securing more than 328 kilometers stretching from the Badia to As-Suwayda and Daraa. A few days ago, all the towns in the Huran area fell under the control of the Syrian army. A large part of southern Syria was under the rebels who coexist with the Syrian military, following an agreement stipulated by Russia in 2018. These militants created a “buffer zone”, controlling the border crossing with Jordan and protecting the Israelis occupying the Syrian Golan Heights and Israel’s borders. The Israelis repeatedly said they feared the presence of Hezbollah and Iran on the Syrian borders and failed to impose a zone free of Iranian presence where the Syrian leadership wanted it.

However, Russian Foreign Minister Sergei Lavrov said, “Russia will not accept Syria being used as a platform for operations against Israel.” In this way, Russia is sending the message to the US and Israel that Syrian forces on the Syrian borders are a guarantor of Israel’s protection and an indication to Iran that Moscow wants the occupied Golan Heights front to remain cold.

Russian Minister Lavrov undoubtedly expresses Russia’s concern for Israel’s security and offers Moscow’s guarantee to prevent attacks on the occupied Golan Heights. However, Russia did not prevent Israel from violating Syrian sovereignty and territory. In fact, Israel carried out more than a thousand attacks, violating Syrian sovereignty, killing many civilians and destroying many positions and warehouses belonging to the Syrian state. Moscow offered the Syrian army surface-to-air missiles to intercept the aggressive and repetitive Israeli attacks, but failed to stop these attacks even when Israel was responsible for shooting down the Il-20 aircraft and killing 15 Russian service members.

Russia has been present in the south since 2018, following an agreement between local militias and the Syrian government. This agreement is no longer necessary because Damascus forces took full control of southern Syria. Moreover, Russia cannot prevent Syria from liberating its territory (the Golan Heights) when the central government decides to do so at any time in the future.

Undoubtedly, Iranian influence and military presence in Syria are consequences of the global war against Syria and its request for Iranian support. While the US prevents Middle Eastern countries from re-establishing ties with Syria, Damascus shows its willingness to open a new page with Western and Arab countries. Therefore, the US is the main contributor to the rise of Iranian influence in the Levant, when the “Islamic Republic” is the main supporter and provider of Syria’s first needs.

The U.S. may be trying to compensate by revising its position on Syria and its self-violation of “Caesar’s Law” to create new balances in the region and allow the Arab League to include Damascus again. During the recent Baghdad summit, French President Emmanuel Macron engaged with Iraqi Prime Minister Mustafa Al-Kadhemi to explore the EU’s relationship with Assad. Al-Kadhemi briefed President al-Assad in a twenty-minute private telephone conversation immediately after the conference ended.

The return of the official Jordanian-Syrian relationship has to do with border security, the prevention of former smuggling routes between the two countries and the fight against terrorism. Jordan is taking the lead as a pioneer in opening the door for other Middle Eastern countries to pass through and allow the U.S. administration to prepare its future policy to bring Syria back to regional and international platforms and out of isolation. This is not going to happen anytime soon. However, it is the beginning of a fundamental change of position towards Syria.

The international community will have no choice but to embrace Syria, the sooner the better, before the Iran nuclear deal is implemented and when all sanctions are lifted. When this happens in the coming months, Iran is expected to become much stronger financially and enjoy unprecedented economic and financial power. Its support for Syria will become much more significant, rendering the U.S. and EU embargo useless and ineffective.

The Iranian tanker docked in Syria and the fuel was transported to Lebanon, breaking the balance as does Hezbollah’s arms supply. The Iranian presence in Quneitra also worries Israel and the United States and calls into question the Israeli occupation of the Syrian Golan. Moreover, the Syrian war is coming to an end with the liberation of US and Turkish occupied territories in the north. The US forces will leave sooner or later, which will cause great concern to the Kurdish forces in that part of the northeastern part of the country.

In fact, the representative of the “Syrian Democratic Council” (the force protecting the US occupation forces) in the US, Bassam Saqr, said that “the US should warn the Syrian Kurds if the decision is made to withdraw all forces. The withdrawal, when it happens, should be gradual, step by step.”

A change in U.S. policy and its review of the future of its forces occupying northeastern Syria is to be expected. What has set off alarm bells in the US and other Gulf countries is the strength Iran has achieved and the power it is enjoying as an unintended consequence of the Syrian war in 2011. It is time to admit the failure of US objectives and allow the Syrian economy and its relationship with the rest of the world to flourish. The Syrian-Iranian relationship is strategic and their strong bond is robust enough not to be at risk regardless of future developments in Syria.

This article was originally published on Elijah J. Magnier’s blog on September 27, 2021.

The Translation for Mision Verdad was done by José Miguel Aponte.