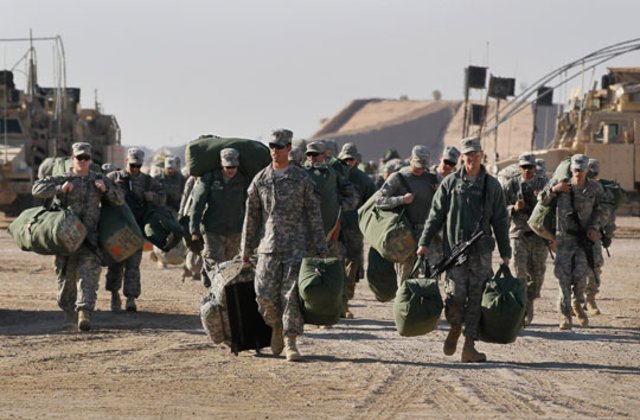 After the chaotic exit from Afghanistan, many experts predict the withdrawal of US troops will next be from Iraq and Syria.

US President Joe Biden has said the US is no longer in the ‘nation-building’ business abroad.  George W. Bush sold the US Congress and the UK on forcing democracy down the throat of the Iraqi people, who had no experience with democracy.  After years of bloodshed, and millions of Iraqi lives lost, democracy was never established, at least not a democracy any American would recognize.

Instead of establishing a secular form of government, the US insisted on forming a sectarian government in Baghdad, were religious differences keep the Parliament in constant turmoil and divisions. Imagine the US Congress had to elect a certain number of seats for Jews, Catholics, Protestants, and Muslims.  Leaders elected not on their ability to lead, but on which place they worship at.

The US made one previous exit from Iraq, but was called back to help in the fight to defeat ISIS, which was declared achieved by Donald Trump.  But, the US troops remained.  The Iraqi Parliament declared that the US troops must leave, but the US government has refused to comply with the request of a government they created.

When the US attacked Iraq, the infrastructure was destroyed.  Hospitals, schools, electricity and water systems that had functioned under the dictator Saddam Hussein were destroyed, and never fully rebuilt.  The US spent billions on the war in Iraq, but did not spend that money on rebuilding or restoring social order.  Some people made a huge amount of money off the Iraq war, but the people did not benefit from the influx of cash.

Monday morning quarterback Senator Mitt Romney said the mission in Afghanistan is not over, as there is still Al Qaeda present.  He failed to explain the Al Qaeda presence in Idlib, Syria which is under US protection, and international aid agencies such as the UN keep the terrorists, their families and the three million people they hold hostage well fed and cared for. Why would the US government declare Al Qaeda an enemy in Afghanistan, and tolerate their occupation in Idlib with repeated UN resolutions?

The UN states member states must fight Al Qaeda wherever they are. When the US supports Al Qaeda in Idlib, it presents a serious double standard.

The US invaded Syria illegally, under the guise of fighting ISIS.  Trump declared the mission accomplished and ordered a withdrawal.  The military and war-hawks of the US Congress persuaded him to leave a few hundred troops in north east Syria to steal the oil from the largest oil field in Syria, thus preventing the Syrian people from having electricity. Currently, many areas have no electricity, and most areas have about four hours of electricity per day, due to the lack of oil for power generators.

The Kurdish separatists who aligned with the US in the fight against ISIS have ethnically cleansed the north east of Syria, causing Arabs and Christians to be homeless and displaced.  When the US troops leave, the Syrian government will resume medical facilities, schools and civil institutions there.  The oil will be used to provide electricity on the national grid. The homeless and displaced can finally return to homes and farms.

“Yankee Go Home” is a sentiment felt from Damascus to Baghdad. Syria is the only secular form of government in the Middle East, and has been a model for religious freedom and tolerance.  The US supported terrorists following Radical Islam tried to bring down the government in ‘regime change’ under Obama, but Trump cut off in 2017 the US funding for the CIA program which trained, weaponized, and paid the fighters to rape, kill and maim across Syria.

It took 20 years for the US to withdraw from Afghanistan.  Syria has been suffering from fragmentation caused by the US invasion since 2015, and Iraq’s Parliament has requested the US withdrawal in 2020. Biden has said his policy is to bring troops home from never ending wars abroad.  It is time for the US troops in Iraq and Syria to start packing, and go home in peace.

Steven Sahiounie is an award-winning journalist