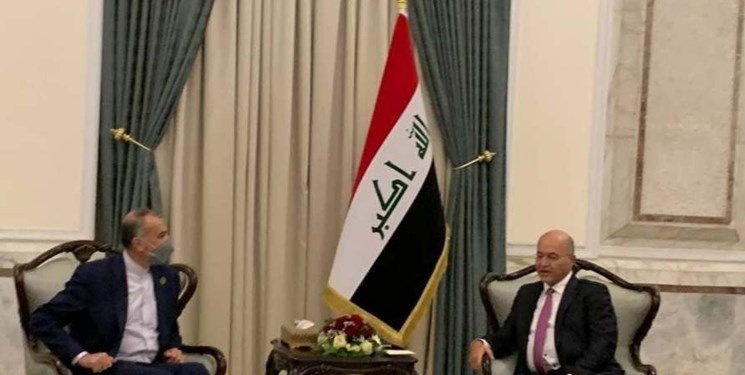 During the meetings that were held on the sidelines of ‘Summit on Regional Support for Iraq’ in Baghdad, Amir Abdollahian conveyed Iranian President Seyed Ebrahim Rayeesi’s greetings to Iraq for holding the event.

During the meeting with President Salih, the Iranian foreign minister discussed regional developments and economic cooperation between the two neighboring states.

President Salih, for his part, appreciated participation of the Iranian delegation in the event. He also appreciated Iran’s supports.

In a separate meeting with the Iraqi prime minister, Amir Abdollahian reviewed cooperation and implementation of economic projects.

He termed his participation in the event as Iran’s determination for supporting Iraq.

Al-Kadhimi, for his part, stressed the importance of good-neighborliness and strategic ties between the two countries.

He praised Iran’s lasting and constructive role in support of Iraq and also participation of Iran’s high-ranking delegation in ‘Summit on Regional Support for Iraq’ .

The ‘Summit on Regional Support for Iraq’ kicked off in Baghdad on Saturday with delegations from Iraq’s neighbors and some countries in the region and the world except Syria.

Iraq has announced that the aim behind holding the Baghdad summit is decreasing tension in the region, developing economic relations, and solving disputes among Iraq’s neighboring states.

In relevant remarks on Saturday, Amir Abdollahian underlined the US negative role in exacerbating the security situation in the regional states, specially Iraq.

Amir Abdollahian made the remarks while addressing the ‘Summit on Regional Support for Iraq’ in Baghdad on Saturday.

He said that the new Iraq needs to rebuild and improve regional relations at the moment.

Referring to the meeting with the presence of countries in the region which confirms the Iraqi Republic’s efforts in creating scopes of cooperation and interaction between the states, Amir Abdollahian expressed hope that they would reach a developed, secure, and free region through holding such meetings.

Today, Iraq plays an important role in the region because of constructive efforts and vision, he added.

He noted that the Islamic Republic of Iran was one of the first countries in the region to recognize the new Iraq and develop its political, economic, and trade exchanges with it by supporting political processes in the country.

A new Iraq free from terrorism requires internal reconstruction and strengthening and expanding cooperation in the region, he stated.

While supporting the stability, security, independence, territorial integrity, dignity, authority, and promotion of Iraq’s regional and international status, the Islamic Republic of Iran expresses its readiness to develop bilateral and regional cooperation, he reiterated.

He further noted that the existence of eight official crossings between the two states and the continuation of trade exchanges at these crossings, even despite the coronavirus outbreak, shows close economic relations between the two countries.

Referring to the emergence of the terrorist ISIL group and the irreparable losses it caused, he added that the Islamic Republic of Iran, in the fight against terrorism, rushed to the aid of Iraq and did its best in this regard, while the US government committed a big crime and martyred Lieutenant General Qassem Soleimani, the former commander of the IRGC Quds Force, along with Martyr Abu Mahdi al-Muhandis, the deputy head of Iraq’s Hashd al-Shaabi.

He highlighted that not only did the US not bring peace and security to the people of this region, but they were also the main cause of insecurity, and this is clearly visible in many countries in the region.

Emphasizing the role and support of the countries in the region for the stability and security of Iraq, he stressed the realization of security with the help of all Iraqi neighbors, including the Syrian Arab Republic.

The Islamic Republic of Iran has always emphasized the realization of peace through intra-regional dialogue besides negotiations and hopes that regional countries will achieve a common belief that security will not be achieved except through mutual trust of regional countries, relying on national capabilities, strengthening communication and good neighborliness among regional countries, and non-interference by foreign countries, he underscored.

This shared belief can pave the way for lots of political, economic, and cultural cooperation in the region and ensure the areas of comprehensive growth and development of countries in the region, through common and sustainable security and using God-given wealth.

The Islamic Republic of Iran supports the Iraqi government and people and its decisions in the field of internal affairs, including the withdrawal of foreign military forces and the holding of early elections, adding that Iran welcomes Iraq’s constructive role in promoting the culture of regional dialogue and cooperation, he stated.

Stressing the important role of countries in the region, the Islamic Republic of Iran declares its readiness to advance the aforementioned goals, he noted.