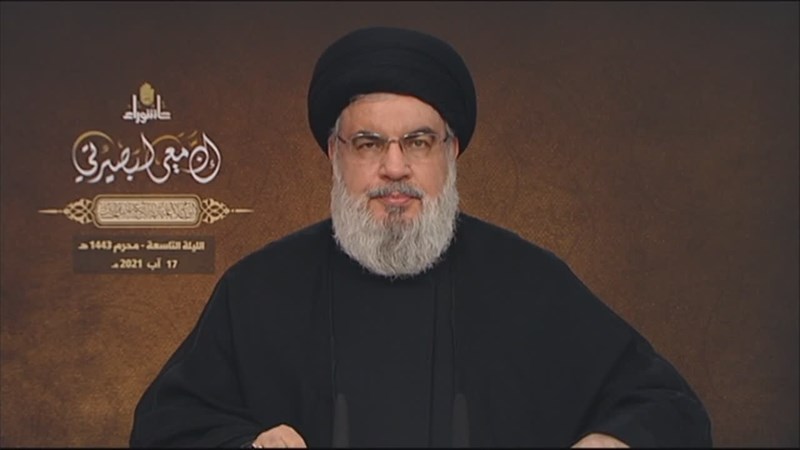 Hezbollah Secretary-General Sayyed Hassan Nasrallah addresses monopolies and fuel smuggling in Lebanon, as well as the United States role in the economic war on Lebanon.

Hezbollah Secretary-General Sayyed Hassan Nasrallah made a speech Tuesday in which he addressed several issues, including the Lebanese fuel and economic crises and the latest developments in Afghanistan.

Sayyed Hassan Nasrallah stated that there are political leaderships in Lebanon that are partaking in protecting the fuel monopolists.

In his speech on the occasion of the ninth night of Ashura, Sayyed Hassan said some leaders ignored the current crisis and focused on smuggling oil to shift the blame on Syria and its allies. “We reject smuggling, and we do not protect anyone who does it. We are working on providing diesel for hospitals and municipalities,” he added.

Sayyed Hassan revealed that Hezbollah had made contacts with officials in Syria to obtain a certain amount of diesel to meet the demand of hospitals and bakeries. Sayyed Nasrallah said he received a message from top Syrian officials to help prevent smuggling, for it harms Syria’s economic plans.

“Some of those smuggling fuel to Syria are apparently among its enemies,” he said, asserting that controlling the Lebanese borders with Syria is the state’s responsibility rather than Hezbollah’s.

“Those who believe Hezbollah supports smuggling fuel to Syria, where we have sacrificed our lives, are wrong, unjust, and suspicious,” said the Secretary-General.

The United States wants an obedient and servile Lebanon

Concerning the situation in Lebanon, Hezbollah’s Secretary-General stated that it is part of an economic war intended to humiliate the Lebanese people. He went on to say that the US wants Lebanon to be obedient and servile.

He emphasized that Lebanon is a part of the Resistance Axis, which has defeated US ventures on multiple occasions, and that the war began prior to October 2019 with the sponsorship of ‘civil’ organizations affiliated to the US embassy.

Sayyed Nasrallah indicated that it was the US who exerted pressure on the Lebanese prime minister at the time – Saad Hariri – and forced him to resign, stressing that the purpose of this economic war is to strangle the Lebanese people into suffocation.

He reinforced being conscious of what is going on and knowing that the situation is not only the product of domestic issues, reiterating that the crisis is also the result of an external war, which should increase the people’s capacity to be more patient. He remarked that the Resistance is powerful, robust, and stable.

The scenes in Afghanistan are monumental

Secretary-General Sayyed Hassan touched on the developments in Afghanistan, saying the scenes are monumental. “The peoples of the region must realize its strategic importance,” he added.

“The scenes in Kabul are completely identical to those in Saigon, Vietnam,” he noted, asserting that the United States is still ignorant and unknowledgeable region-wise, for it is repeating the same mistakes.

Sayyed Hassan Nasrallah stated that US President Joe Biden withdrew from Afghanistan because he could not handle it anymore. “Biden said he spent more than one trillion dollars, and here they are – they came out humiliated, failed, and defeated,” he declared.

The secretary-general added that Biden wanted civil war in Afghanistan through fighting between the Taliban and the Afghan government forces.

He also said the Americans took out the equipment and even the police dogs from Afghanistan, while leaving behind those who’ve helped the US forces in their occupation.

“Biden said that it is not the Americans’ duty to fight on behalf of anyone, and that is a message to those who are waiting for [the Americans] to fight for them.”