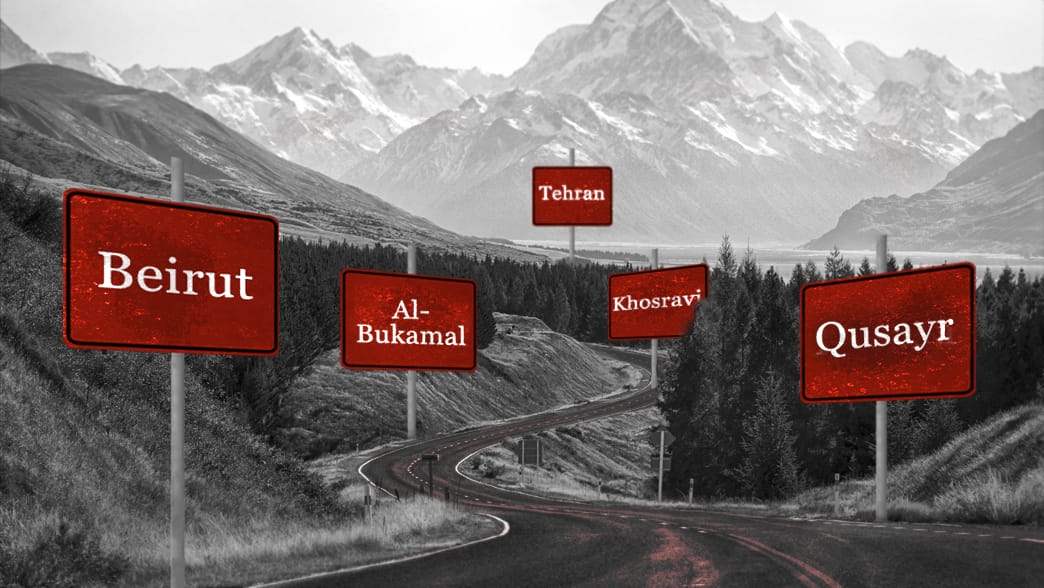 From the Levant to the Persian Gulf, a land route is now open, and the Axis of Resistance controls those borders crossings.
Photo credit: The Cradle

Many wars have been waged in Iraq, Syria, Lebanon, and Palestine to defeat the “Axis of Resistance” or to at least deplete its logistics and supply lines. In all wars, tons of ammunition, bombs, and missiles are expended on both sides, often exhausting supplies. Each belligerent, therefore, needs to replenish its arsenal for the next confrontation, or at the very minimum, to demonstrate to the enemy its growing military capabilities, preparedness, and access to vital supplies. Most of the time, this is a valuable deterrent strategy used to avoid wars. However, because the 2006 Israeli war on Lebanon and the subsequent US occupation of Iraq and eastern Syria failed to achieve the desired US-Israeli objectives, the goal shifted heavily toward obstructing their supply lines: to cut off the Axis of Resistance road.

The aim was to stop Resistance Axis members (Iran, Syria, Hezbollah, Hamas, and Iraqi resistance groups) from re-arming themselves, and to prevent their access to weapons upgrades in advance of the next military confrontation. There began a race between the US-Israeli alliance and the Resistance Axis to control the accessibility of the vital Tehran-Beirut landline. This objective was reached first by the Resistance Axis, who liberated the Albu Kamal-al Qaem crossing on the Syrian-Iraqi border and placed it firmly under their control. Ever since, this crossing has also become a hub for critical commercial and consumer supplies whose flow the US has tried to halt by imposing harsh sanctions on Iran and Syria to prevent Iraq from providing any support. Rather, the US tried, but failed.

This significant American defeat, however, was not blared from rooftops, either by the US or by its adversaries. It is sufficient for the Resistance Axis that anything and everything they wish to transport via Iran, Iraq, Syria and Lebanon, reaches its destination, unhindered.

Traveling from the Syrian town of Qusayr, on Lebanon’s border, to Palmyra (Tadmur) is safe despite the dozens of checkpoints along the road. The Syrian Army controls the area and prevents anyone from traveling between provinces without valid documentation. Many Syrians from these provinces fled to secure areas to escape ISIS rule, and have since been trickling back to inspect their abandoned homes and resettle. Syria’s Badiyah has also become relatively safe following months of indiscriminate attacks by ISIS remnants against travelers. According to security officers, most of the ISIS militants were inhabitants of the area and its surroundings, and fled when ISIS was defeated by Syrian allied forces in 2017 and 2018.

Since then, special security brigades have been deployed from Palmyra to Deir Ezzor, while others continue to patrol the Syrian steppe to hunt down ISIS militants. However, it is still unsafe to travel through the Badiyah, and the main road used is via Sukhnah, Kabajeb, Asholah, and Deir Ezzor. From Deir Ezzor to the Iraqi border, the route via al Mayadeen, al Salehiya, and Albu Kamal is safe and well protected.

When the decision was made to clear the road and eliminate ISIS in the cities east of the Euphrates River, the Syrian Army and its allies attempted to free the al-Tanf border region with Iraq. US jets intervened, attacked the brigades, causing more than 50 casualties to prevent the defeat of ISIS targets. The Resistance Axis’ joint military operating room understood that the US plan was to cut off Syria from its neighbors, since its borders with Jordan were already closed.

Brigadier General Qassem Suleimani, head of the Iranian Revolutionary Guards Corps’ Quds Brigade – later, assassinated by US drones near Baghdad airport in 2020 – personally took part in the assault on al Mayadeen and Albu Kamal, even before the liberation of Deir Ezzor. Soleimani wanted to reach and control the Syrian-Iraqi borders before the Americans, fearing the US establishment of a “no man’s land” to prevent free passage between Iraq and Syria.

Syrian Druze General Issam Zahreddine – later, killed by a mine after defeating ISIS in Deir Ezzor – was fighting alongside Hezbollah’s al-Radwan Special Forces, and managed to prevent an ISIS takeover of Deir Ezzor airport and part of the city, notwithstanding intervening US airstrikes that unsuccessfully aimed to enable the ISIS airport breach and killed and wounded over 200 Syrian officers. When the decision was taken to liberate the entire province, Suleimani was not very concerned about the city because Russian-supported Syrian Special Forces (Tiger Brigade) were already crushing ISIS positions there.

Suleimani coordinated his efforts with the Iraqi resistance, hunting down ISIS along the borders between Syria and Iraq’s al Qaem, in order to corner and eliminate the terrorist group on both sides. Following fierce battles, Albu Kamal and al Qaem were liberated – becoming the only border crossing to fall into the hands of the Syrian Army and its allies. Syria was no longer isolated from its surrounding neighbors. The road between Tehran, Baghdad, Damascus, and Beirut was open, and for the first time since the era of Saddam Hussein, in the hands of the Resistance Axis. A sea route is insufficient to transport all the needs of the Axis. This is why it was vital to open the land route at all costs. The US and Israel were aware of the plan but were in no position to stop it.

Driving from Deir Ezzor to Albu Kamal, the Euphrates River offers the sight of rare birds who migrate to this area now that it is no longer heavily frequented. The many abandoned and shell-pocked houses along the route remind passerbys of the ferocity of the battles. Syrian Army checkpoints are strict about preventing visits from anyone who doesn’t live in the province. The Americans control the other side of the river, and the oil and gas wells can be seen from afar with the naked eye.

In the main, ISIS militants were inhabitants of this area too, with foreign jihadists representing only a tiny percentage of the fighters. This is another reason why it is not safe to travel by night. With nightfall, it becomes clear that electricity has not been restored. The sound of only a few private generators can be heard from time to time. During the daytime hours, however, the generator count spikes, as farmers switch them on to pump water for their fields. The area is rich in its agriculture, and despite the US occupation of Syria’s strategic foodbelt province of Hasaka, provides enough wheat to be distributed to provinces beyond Deir Ezzor.

At the gate of Albu Kamal, a large billboard welcomes visitors with the name of the city, a portrait of President Bashar al Assad, and the Syrian national flag. Though incomparable with the old souk markets of Damascus or Aleppo, the local vegetable and fruit market still flourishes and bustles during the day.

Houses are one or two floors high, many with shops underneath. Several private villas adorn the border city. It is impossible to miss a large portrait of Iran’s Brigadier General Qassem Suleimani and Iraq’s PMU Deputy Commander Abu Mahdi al Muhandes, both assassinated by the US in Baghdad in January 2020. The two men contributed to the liberation of Iraq and Syria from ISIS, indeed, mainly Albu Kamal city. Soleimani used one of the private villas as his headquarters when in town, and left a hand-written note to the owner asking him forgiveness for using his house, and leaving his phone number to be contacted in case of need.

Eight kilometers separate Albu Kamal from Al Qaem on the Iraqi borders. The road is crowded with trucks crossing mainly from Iraq, and a few from Syria. Iraq established a border position to allow the flow of goods to Syria, though essentially follows the guidelines of the severe EU-US embargo on Damascus. Not far from the main road controlled by both the Syrian and the Iraqi customs authorities, there is another road where trucks transit between Iran-Iraq into Syria and Lebanon. These trucks are sealed so they won’t be opened on the road, and are verified by the Syrian authorities before they cross into Lebanon. After many years in the making, and dangerous challenges along the way, the Axis of the Resistance has managed to secure its logistic supply route.

Israeli and US forces have targeted the area dozens of times. Warehouses, military bases, and large isolated shops were destroyed last year by Israeli jets, but without managing to slow down the flow of supplies, or the replenishing of goods and structures destroyed by the enemy’s air force. Israel also bombed thousands of cars, trucks, and refrigerators stocked by Iranian donors for the province’s inhabitants to distribute. Iran is earning the loyalty and hearts of the local population by offering another behavior, contrasting starkly with what ISIS made these inhabitants endure through fear and punishment.

It is no secret that the people of Albu Kamal notice the withdrawal of many of the forces stationed in the city. There is no longer a need for a considerable power to be permanently based in Albu Kamal. The Axis of Resistance supply line is still secure. Iran has opened several pathways: Tikrit-Haditha-al Qaem, Baghdad-Ramadi-al Qaem, and Diwaniyeh-Hilla-Fallujah-al Qaem. This means, despite more than a thousand Israeli attacks, neither the commercial exchange between Syria and Iraq-Iran nor the Resistance Axis’ supply line has never once stopped since ISIS’s defeat.

The American military presence at al Tanf border between Iraq and Syria serves no US national interest and represents no danger to Washington, yet it persists to placate a desperate Israel (despite its constant bombing of Syria) that fears being left alone to face the Axis of Resistance. The US is indeed acting only to serve Israeli interests by keeping hundreds of its servicemen occupying and inciting Levant conflict zones.

How long can Israel hang on to this American security blanket? Take note of the sudden US mass exit in Afghanistan. Two decades and a trillion dollars wore Washington down, achieving nothing of the initial objectives it set in 2001. America’s global political and economic clout has shrunk considerably since then. There is reason to believe the same scenario will happen sooner or later in Syria.

Israeli air bombing has never stopped the Axis of Resistance from arming itself and being prepared for Tel Aviv when it decides to wage the next war. Hezbollah managed to stockpile hundreds of precision missiles under the searching eyes of the Israelis without them being able to alter the outcome. The Axis of Resistance has won the battle and cleared its path: the road from Tehran to Beirut is open and secure.