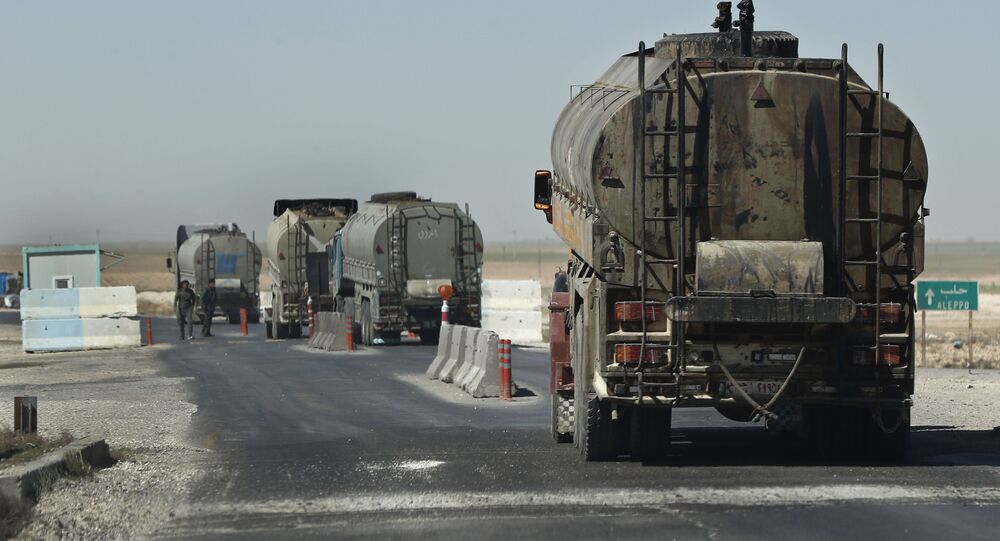 The United States and its Syrian Kurdish allies control up to 90 percent of Syria’s oil-producing territory, depriving the war-torn country of a much-needed source of fuel and hard currency income. Iran has sent emergency fuel supplies to Syria to help deal with shortages, but its ships have come under regular attack by Israeli saboteurs on route.

55 vehicles including tankers loaded with oil and escort vehicles have made their way out of Syria into Iraq via the al-Waleed border crossing over the past 24 hours, the Syrian Arab News Agency has reported.

On Friday, local sources on the ground in the countryside outside the town of al-Yarubiyah, al-Hasakah governorate told the news agency that a 25-vehicle convoy, including tankers, covered trucks and refrigerators was sent east to toward the border.

Before that, sources reported that 30 vehicles, including tankers, trucks and armoured vehicles, also made their way toward the al-Waleed checkpoint.

The Syrian government considers the al-Waleed crossing illegal, as it does not enjoy control of the frontier checkpoint on the ground.

Friday’s incidents are just the latest instances of the illegal smuggling of Syrian oil by the US and its Kurdish allies to be reported by Syrian media. Last Tuesday, SANA said that an 80-vehicle convoy from the al-Jazeera region had been taken out of the country, again using the al-Waleed crossing. Before that, 25 more oil carriers were spotted driving through the border crossing into Iraq.

Syrian media consistently report on the US smuggling activities, which in addition to oil occasionally sees the theft of food supplies. Eastern Syria is home to the vast majority of the country’s oil and gas riches, and serves as its breadbasket, and US forces and their allies have exploited the region as best as they can and blocked its return to the Damascus government for over than four years.

Robbed of these territories and deprived of the energy and food self-sufficiency that it enjoyed prior to the start of the foreign-backed civil war in 2011, Syria has depended on Iran and Russia for fuel and food assistance in recent years as it rebuilds from the war.

The US presence in eastern Syria has no basis in international law, but the Biden administration has no plans to remove its “footprint” from the country, according to senior administration officials speaking to Politico late last month. Damascus has repeatedly demanded that all foreign forces not explicitly invited into the country by its legitimate government, including US and Turkey, plus Israeli forces occupying Syrian Golan, leave the areas they are occupying immediately.

The US is estimated to have about 900 troops, including Green Beret special forces, in Syria at the moment.

Unlike his predecessor Donald Trump, who openly boasted about “taking” and “keeping” Syria’s oil, President Joe Biden have framed the occupation of the eastern part of the country as a matter of “fighting terrorism.” However, Syria and its allies have regularly accused the US of acting in coordination with jihadists over the years as a means to justify their continuing occupation.

Earlier this summer, during a visit to an industrial park outside Damascus, Syrian President Bashar Assad assured his compatriots that Syria would eventually overcome all difficulties facing it and restore its industrial base, notwithstanding current difficulties caused, among other things, by crushing Western sanctions.