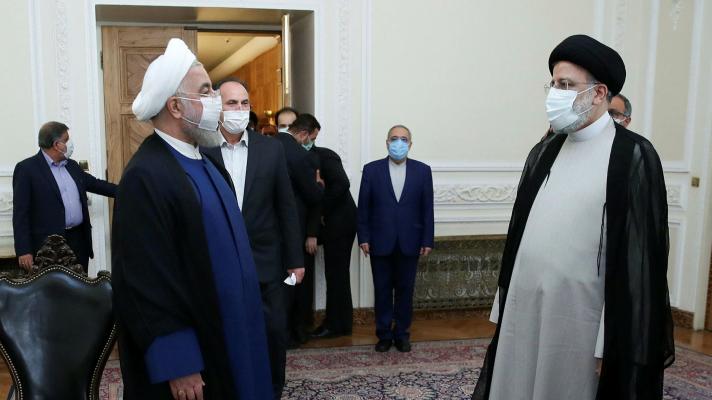 Despite the Islamic Republic’s denial of responsibility for taking the initiative and attacking an old empty oil tanker almost a week ago before the new president Ibrahim Raisi took the reins of power, it appears that Iran upset the balance of power. Targeting an Israeli-owned ship is not unusual because retaliation in the Oman Sea is not uncommon. However, responding in the open sea to an Israeli bombing in Syria is the first time Iran has established this new Rule of Engagement.

If this suggests anything, it indicates that the new Iranian administration has bared its teeth to tell Israel and its strategic ally, the United States, that it will not tolerate the slaughter of its men, and is far from turning the other cheek. It is expected that from now on Iran will take the initiative instead of rolling over before the many blows received for years in Syria or other areas. The next Iranian administration can amply confirm that “there is a new sheriff in place.” According to the Iranian constitution and Iranian presidential election law, the term of office of the new president begins when he receives the message of approval of the results from the Walid al-Faqih, Sayed Ali Khamenei.

Israeli Admiral Eli Sharvit, Commander of the Naval Forces, awarded medals and certificates of appreciation to the Israeli marine commando unit of Shayete-13. The awards were given for covert operations carried out by submarines, missile boats, planting naval mines, gathering intelligence, sabotaging petro-products and supplies in Syria and attacking ships: activities related to the interests of the “Axis of Resistance” in Syria and Iran and against Hezbollah, as formulated by Israel.

These Israeli naval activities relate to past years when only 16 attacks against Iranian tankers were officially announced. Israel claims that many other attacks were not disclosed by any party and that its forces have achieved considerable successes against Iranian targets. The Israeli navy lost much of its reputation in the summer of 2006 when Hezbollah launched its Chinese-made C-802 missiles and they hit the armed ship “INS Hanit”, killing four soldiers.

The Israeli navy and military intelligence and its Western allies were unaware of Hezbollah’s missile capabilities. Consequently, Israel failed to identify, locate and destroy the Hezbollah missiles that took the Israeli navy out of the equation in the early days of its second war against Lebanon. After many years, the Israeli navy is back in the field, and its recent activities were visibly and primarily directed against Iran, which has now decided to retaliate.

Israel began its attacks on Iranian tankers in mid-2018 and caused great patrimonial losses. Haaretz admitted that Israel launched “dozens of strikes” – mostly undisclosed – against Iranian targets, causing billions of dollars in property losses. However, last Thursday’s suicide drone attack in the Gulf of Oman set a precedent since it involved the death of the captain of the Israeli tanker and his security officer. The implementation of this new deterrence strategy disrupts Israel’s “bombing autonomy” in Syria, expanding the Iranian platform of retaliation to cause greater control and limit Israeli freedom and leverage in the Middle East.

Since U.S. support for Israel is absolute, dozens of Israeli sabotage attacks are, of course, considered in “self-defense.” Aggressive forces have turned Article 51 of the UN Charter into a mechanism to justify violence and intrusion, against international law and sovereign status. This abusive logic is the reason why Israel’s acts are not condemned even if assassinations occur abroad, particularly in Iran. The thousands of bombs dropped on Syrian targets, the recent assassination of nuclear scientist Mohsen Fajrizadeh and other scientists killed by the Israeli Mossad are only a few examples of this spurious “immunity”. Yet the West considers the Iranian responses (only four compared to Israel’s dozens) to be “terrorist acts”.

The U.S. administration regularly backs Israel no matter how many times it violates the airspace of neighboring countries or attacks official institutions or regular armies, or commits acts of sabotage in international waters. Israel has a weighty political and media influence in the United States, of which no U.S. administration can apparently afford to ignore or condemn.

While U.S. officials never ever denounce Israel, whatever crime it commits, Secretary of State Antony Blinken goes further. He has stated that “Iran continues to act with tremendous irresponsibility. We are in direct contact, in coordination, with the United Kingdom, Israel, Romania and other countries. (…) There will be a collective response.” The U.S. administration is hinting that a collective act of war or perhaps more “sanctions” against Iran should be imposed.

The United States is going through a nuclear crisis with Iran in Vienna, where nuclear negotiations have stalled. The new U.S. administration missed the opportunity to conclude the nuclear deal with the previous government of Sheik Hassan Rouhani in the first months of Joe Biden’s assumption of power. The golden opportunity is no longer available because both sides, the U.S. and Iran, have maintained their positions and are therefore not interested in discussing additional conditions from each side. This new reality will lead to the inevitable conclusion that the agreement is gone with the wind and only needs a funeral for its official burial ceremony. By halting negotiations, the U.S. shifted the blame to Iran, even as it was responding to Israeli attacks, totally ignoring the U.S.-backed assassination and sabotage carried out by Israel in years past.

Iran and Israel have been fighting their “campaigns between wars” for decades. However, Israel convened its global allies, heads of state, politicians and international media to launch a campaign against Iran, omitting and suppressing acknowledgement of the 16 attacks carried out by Israel against Iran, and the thousands against Syria. This is due to the Western principle that “only Israel has the right to attack targets in the region”. The Iranian attack has now confused Tel Aviv and put it in an embarrassing position, regardless of whether it chooses to respond or not.

It is possible that Israel’s aggressive nature, which it has developed since 1948 against the Palestinian people and several neighboring countries, has been reshaped and modified. Israel is in an uncomfortable position, struggling to decide how best to respond to Iran, in one of the interconnected theaters of military operations (from Gaza to Lebanon and Syria, Iraq, Yemen and Iran itself). However, Israel is also aware that any future attack on Iran will undoubtedly have a corresponding response. Since the Iranian response against the most important US military base at Ayn al-Assad in Iraq, Iran in effect presumes that it no longer fears confrontation and has no intention of allowing Israel to continue its attacks on the “Axis of Resistance”.

This is certainly a revelation of the future policy of the new Iranian President Raisi. Sayed Raisi seems, unlike his predecessor, not to be an enthusiast of continuing diplomacy (rather than another method) to protect Iran’s interests. The new president is following in the footsteps of Wali al-Fakih Sayed Ali Khamenei, who believes that “Iran should not trust or negotiate with the West because Iran’s enemies attack us as much as they can. The only time Westerners don’t attack us is when they can’t.” From the first minute of his inauguration, Sayed Raisi – in a respectful and non-prescriptive gesture – showed his modest attitude to Wali al-Fakih by publicly asking for his permission to deliver his first speech as President.

Iran no longer has much to lose in its relationship with the West, whose agreements it does not trust, and which refused to lift all “sanctions” and returned to the nuclear deal signed in 2015 without amendments. Therefore, Iran has nothing to gain by appeasing the West or remaining silent about its double standards and its unlimited and one-sided support for Israel. Thus, all possibilities are up in the air, and Middle East instability remains the only guaranteed future that all parties can count on.