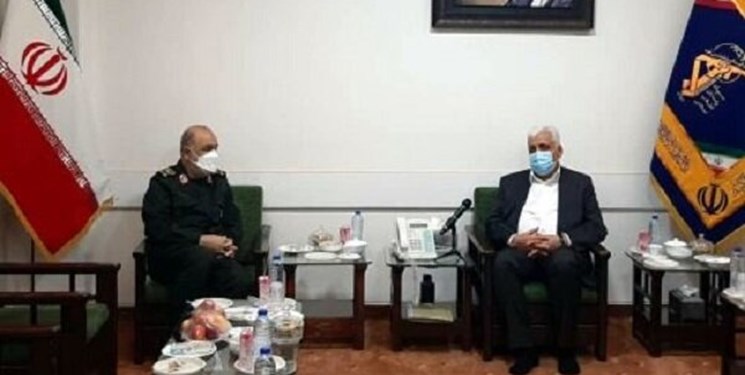 General Salami made the remarks in his meeting with the Head of the Iraqi Popular Mobilization Force (Hashd al-Shaabi) Falih al-Fayadh in Tehran on Sunday.

He reiterated that Iraq’s Hashd al-Sha’abi forces played a leading role in defeating ISIL terrorists in Iraq and also provision of security and stability in the country.

He described unity and amity of the PMU forces with Iraqi people as the key factor behind success of Resistance Movement and Hashd al-Sha’abi forces in Iraq.

The IRGC commander pointed to the bravery of anti-terror commanders of the Resistance Front Martyr Lt. Gen. Qassem Soleimani, the former IRGC Quds Force Commander, and Iraq’s Second-in-Command of Popular Mobilization Unit (PMU) Abu Mahdi al-Muhandis, and said that their bravery proved that Iraq is a land that people are ready to sacrifice their soul and body for Karbala, Najaf, Kadhimiya and Samarra.

Fayadh, for his part, pointed to the key role of Iran’s IRGC in confronting enemies, saying that Iraq’s PMU takes pride in IRGC pattern with the characteristics of the Islamic Revolution and “we will never forget the day when American media showed the roadmap of Iraq burning after the arrival of ISIL.”

In relevant remarks on Saturday, Secretary of Iran’s Supreme National Security Council Ali Shamkhani in a meeting with al-Fayadh underlined the need for accelerated withdrawal of foreign forces from Iraq based on the country’s parliament approval.

“Stepping up the proper and complete implementation of this legislation would not only significantly reduce security and even political tensions in Iraq, but also it would be a big step towards establishing more stability and security in the region,” Shamkhani said in the meeting in Tehran on Saturday.

He also hailed the role that the PMU plays in Iraq’s security, and stressed the need to preserve and strengthen that force.

“The unity and solidarity of the Iraqi people, government and armed forces will guarantee lasting security in this country,” the top Iranian security official said.

Shamkhani also described the upcoming elections in Iraq as an important space for the continuation of democracy and the consolidation of the effective political role of the Iraqi people in determining their own destiny, adding “The vigilance and unity among political, religious and ethnic groups is one of the inevitable necessities for holding healthy elections and preventing foreign interference in this important political process in Iraq.”

Fayadh, for his part, congratulated the successful holding of the last presidential elections in Iran, saying that political and security stability in the Islamic Republic is very important and effective in maintaining lasting security in the region.

Praising the valuable role that Martyrs Lt. Gen. Qassem Soleimani and Abu Mahdi Al-Mohandis played in the formation and growth of the PMU in Iraq, he said, “Today, Iraq has achieved acceptable and developing security in line with the guidance of religious leaders and the sacrifices of the armed forces and the PMU.”

Fayadh further described the PMU as a legitimate and complementary organization for the Iraqi army, and said, “The existence of the PMU, which represents the people’s participation in securing their country, has frustrated the enemies and terrorist groups that aimed to create insecurity and instability in Iraq.”