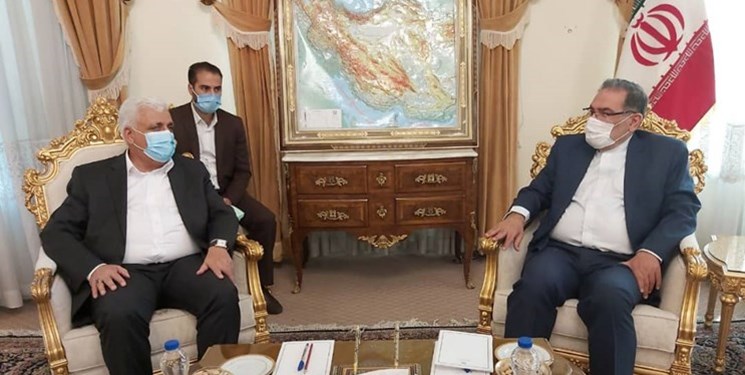 TEHRAN (FNA)- Secretary of Iran’s Supreme National Security Council Ali Shamkhani in a meeting with Head of the Iraqi Hashd al-Shaabi (PMU) forces Faleh al-Fayadh underlined the need for accelerated withdrawal of foreign forces from Iraq based on the country’s parliament approval.

“Stepping up the proper and complete implementation of this legislation would not only significantly reduce security and even political tensions in Iraq, but also it would be a big step towards establishing more stability and security in the region,” Shamkhani said in the meeting in Tehran on Saturday.

He also hailed the role that the PMU plays in Iraq’s security, and stressed the need to preserve and strengthen that force.

“The unity and solidarity of the Iraqi people, government and armed forces will guarantee lasting security in this country,” the top Iranian security official said.

Shamkhani also described the upcoming elections in Iraq as an important space for the continuation of democracy and the consolidation of the effective political role of the Iraqi people in determining their own destiny, adding “The vigilance and unity among political, religious and ethnic groups is one of the inevitable necessities for holding healthy elections and preventing foreign interference in this important political process in Iraq.”

Fayadh, for his part, congratulated the successful holding of the last presidential elections in Iran, saying that political and security stability in the Islamic Republic is very important and effective in maintaining lasting security in the region.

Praising the valuable role that Martyrs Lt. Gen. Qassem Soleimani and Abu Mahdi Al-Mohandis played in the formation and growth of the PMU in Iraq, he said, “Today, Iraq has achieved acceptable and developing security in line with the guidance of religious leaders and the sacrifices of the armed forces and the PMU.”

Fayadh further described the PMU as a legitimate and complementary organization for the Iraqi army, and said, “The existence of the PMU, which represents the people’s participation in securing their country, has frustrated the enemies and terrorist groups that aimed to create insecurity and instability in Iraq.”

In relevant remarks in June, Deputy Chief of Staff of the Iranian Armed Forces Brigadier General Mehdi Rabbani underlined that the foreign countries should withdraw their forces from West Asia, saying that Iran is prepared to cooperate with the regional and world states to establish security and stability.

“Now is the time for trans-regional forces, including the terrorist forces of US Central Command (CENTCOM), who are responsible for the killing of thousands of innocent people, including General Soleimani, to leave West Asia so that the regional countries themselves can establish lasting security,” General Rabbani said, addressing the 9th Moscow Conference on International Security.

“We are now witnessing a geopolitical shift in power in the international system and the transfer of global power from the Western Hemisphere to the Eastern Hemisphere,” he noted, adding, “Iran is ready to cooperate with other countries to resolve issues in the field of global security and stability.”

“The Takfiri ISIL group has been one of the products of the utilitarian perception and commercialization of security in recent years by the above powers. The mobilization and sacrifice of the armed forces of the government and people of Syria and Iraq and the unwavering support of the Islamic Republic of Iran and the Russian Federation led to the defeat of this dangerous approach at the regional and international level,” he added.

“The US efforts to keep ISIL on the battlefield for two to three decades have failed. However, the causes of the emergence of extremist ideology and terrorism on this basis continue, and many factors that were instrumental in creating instability are still hindering the process of establishing security and rebuilding crisis-stricken countries,” Rabbani noted.