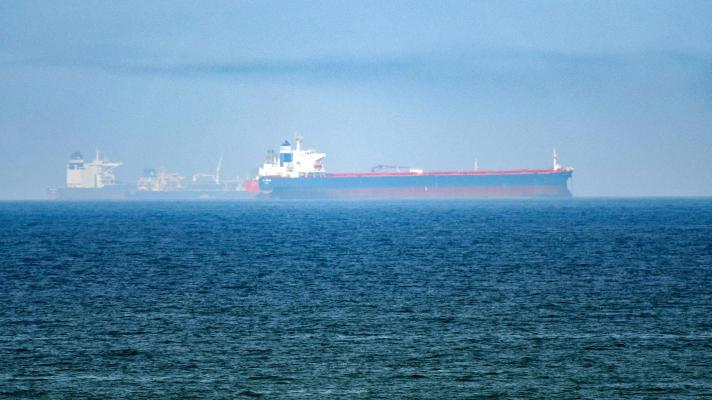 Tanker in the Gulf of Oman (Photo: Guiseppe Cacace / AFP)

A Romanian captain and a British security officer were killed by a suicide drone attack on the tanker M/T Mercer Street, a Liberian-flagged Japanese vessel that is part of the Zodiac Group, owned by Israeli billionaire Eyal Ofer, sailing from Tanzania to the United Arab Emirates. The first attack on the tanker caused only material damage, but was followed by a second attack where the command and control tower was targeted to cause human casualties.

Al-Alam TV claimed that the attack was a retaliation to the Israeli operation on the Dabaa (Homs) airport in Syria, where Iranians and Lebanese Hezbollah were killed and others wounded. Thus, the Israeli attack represents a change in the Rules of Engagement (ROE), violating the admitted limits of the ongoing conflict and pressuring Iran to initiate a “campaign between wars”, expected to increase in intensity in the future. What surprises Israel is that, for the first time, Iran is showing how connected all the theaters are and how an Israeli strike provokes an unexpected response in the Gulf of Oman.

Israel has carried out more than a thousand strikes against targets in Syria during the decade-long war against the Syrian army and “Axis of Resistance” targets. However, Israel’s only objective result was to expand the influence of the “Axis of Resistance” in the Levant, which won the destructive war and defeated the takfiri groups (ISIS and al-Qaeda) and the various Syrian groups supported by the Gulf and Western countries. The “Axis of Resistance” expanded and consolidated its influence in Iraq and Yemen, forming a solid front against Israel and its allies.

Israel tried to operate in the Iraqi theater, sending suicide drones that destroyed seven warehouses belonging to the Iraqi security forces of the al-Hashd al-Shaabi (Popular Mobilization Forces). Also, an Israeli drone operated from U.S. bases in Syria and Iraq attacked and killed an Iraqi commander while he was traveling in the direction of the Syrian-Iraqi borders.

Two years ago, Israel sent two suicide drones into Beirut, the Lebanese capital. One exploded near Hezbollah headquarters, and another crashed and was found intact, containing explosives. This set off alarm bells among the “Axis of Resistance” about Israel’s use of this kind of kamikaze drone to hit its targets while avoiding accountability. The “Axis of Resistance” then adopted the Israeli use of suicide drones for many theaters.

Over the past two and a half years, Israel claims to have carried out several attacks against Iranian targets. The “war of sabotage” between Iran and Israel is no longer a secret, with both sides admitting respective responsibility for attacks inflicted on each other in the traditional way: through leaks to the media. Former Prime Minister Benjamin Netanyahu explicitly broke the Israeli practice of denial and made known Israel’s responsibility for many sabotage attacks and illegal assassinations against Iranian scientists and institutions.

Nevertheless, it can be recognized that Israel is playing with fire since it operates outside its comfort zone and competes in Iran’s backyard. Moreover, Israel is clearly facing a severe challenge to its authority and reputation in the Middle East. The question is, how long can it sustain this tit-for-tat game it initiated itself?

There is no good news for Israel in its war against Iran.

What makes Israel shudder is that Iran has responded in the Gulf of Oman with an attack of its own in Syria, introducing a new SR and choosing the theater directly and not through its allies or in the same operational theater in the Levant. This Iranian decision indicates that Tehran has deliberately evaded any further involvement of the Syrian government, no doubt reluctant to start an open war against Israel. It is also saying that Iran will no longer be restrained by the Syrian framework of retaliation or containment, and that it will choose where to hit back at Israel for its continued attacks on Iranian targets in the Levant.

According to a senior official in the “Axis of Resistance,” Iran is aware that “90% of Israel’s assets pass through the sea, falling in Iran’s operational theater and within a comfortable range for its military size.

“90% of Israel’s assets pass through the sea, falling in Iran’s operational theater and within comfortable range for its military magnitude. Israel is undoubtedly an intelligent enemy. However, the idea of expanding its operational theater into the area controlled by Iran is arrogant, provocative and counterproductive. Israel is offering Iran infinite targets at sea to select from when it initiates this game, which will undoubtedly break its teeth. Israel has much more to lose if it decides to respond to the Iranian attack because retaliation from the Iranian side will not be long in coming. The latest Iranian reaction was significant and balanced, imposing deterrence and a new Rule of Engagement that still causes confusion and annoyance to Israel.”

This is not the first time Israel has bombed the Dabaa airport located in the Al Quseir area. Israel considers the area as a base for the “Axis of Resistance”, a depot area for its strategic and high-precision missiles, and an area involved in the next war against Israel. However, this is the first time Israel targeted a residence at the airport with the apparent intention of causing human casualties, killing and wounding three people.

Israel was thus aware that a retaliation could be on the way. Really, it ignored how, when and where. The tanker Mercer Street was initially attacked by a drone that only damaged the tank. The second suicide drone strike against this Israeli-operated tanker appears to have intentionally sought to cause loss of life (two people were killed), apparently settling the score with Dabaa casualties.

“If Israel escalates tension and attacks, it will get similar acts unless the traditional SRs are restored, where Israel bombs insignificant targets, destroying replaceable warehouses or a kitchen or a runway. If not, Israel should expect retaliation against its interests wherever, with or without a U.S. naval escort. Iran’s target bank is abundant, and Israel is evidently far more vulnerable than it is capable of imagining. This time, the attack took place against an empty tanker, but enough to increase the cover price and cause financial repercussions for Israel,” says the source.

Israel has opened Pandora’s box, and hiding under America’s skirt will not protect Israeli ships if the attacks in Syria continue. Iran is conducting a “between the wars” campaign on Israel, which includes limited options. Any escalation would endanger Israeli shipping, and a lack of response means that Israel has decided to bite its wounds before the watchful eyes of the world.

Iranian deterrence has had its way. The most troubling and crucial part for Israel to consider is whether Iran invokes a Rule of Engagement every time Israel bombs targets in Syria or only when it targets a target belonging to the “Axis of Resistance.” The next moves will answer this question. Neither answer is good news for Israel, which has set in motion a new chain of events that it will itself suffer.