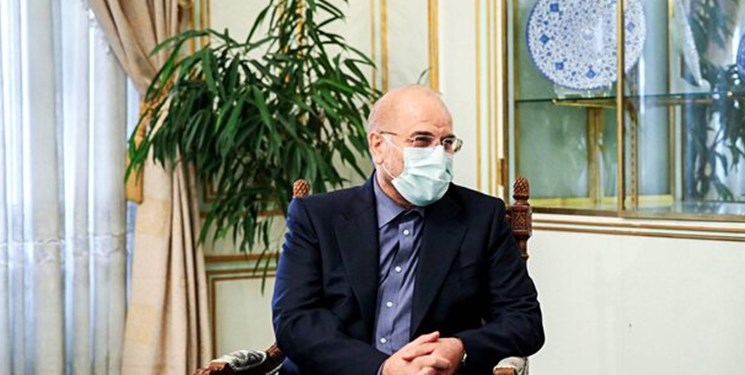 Qalibaf made the remarks after a two-day visit to Damascus at Tehran Mehrabad Airport.

“A comprehensive agreement between Iran and Syria which was signed more than a year ago was finalized during the meeting and will come into force in the next 3 months,” the Iranian parliament speaker said.

The Iranian parliament speaker said that the visit came at a time when Syrian President Bashar Assad gained the trust of the Syrian people once again and a new administration is taking office in Iran.

Qalibaf also said that boosting economic cooperation with Syria and removing obstacles faced by both public and private sector businessmen in their bilateral trade relations with Syria was on the agenda of his trip.

He said that during his official visit he also held a meeting with the business people of both countries to discuss their problems and ways to boost ecnomic and trade cooperation between the two nations.

During a joint press conference with his Syrian counterpart Hammoudeh Sabbagh in Damascus on Wednesday, Qalibaf said that the agreement would expand bilateral relations between the two countries, specially in the economic field and reconstruction of Syria.

In a relevant development on Wednesday, Iranian Parliament Speaker Mohammad Baqer Qalibaf in a meeting with Syrian Foreign Minister Faisal Mikdad in Damascus underlined the necessity for developing relations and cooperation among the Muslim states to tackle the economic war and sanctions imposed by Washington.

Qalibaf noted that the enemy has staged an economic war in the form of the sanctions after its failure in the terrorism war against Syria and the Axis of Resistance.

“Under such circumstances, the obstacles ahead of traders, economic activists, craftsmen and all private sector activists must be removed so that we can win in the economic war by promoting trade relations,” he said.

“The only way to tackle this economic war is to increase relations between Muslim countries, specially the Axis of Resistance,” Qalibaf stressed.

Mikdad, for his part, said that the economic and trade relations between Iran and Syria must be promoted to the highest possible level.

“Relations between the two countries must be promoted in all areas,” he added.

“Political and security relations between Iran and Syria are at the highest level,” Mikdad said, adding “Therefore, why shouldn’t the level of trade and economic relations be enhanced?”

Referring to Bashar al-Assad’s order to further strengthen the country’s relations with the Axis of Resistance, the Syrian foreign minister told Qalibaf, “Your visit to Syria is a blessing for us and we are trying to achieve the goals of this trip to expand relations.”

Heading a parliamentary delegation, Qalibaf arrived at the Syrian capital on Tuesday for an official visit for high-level talks on various issues, including economic cooperation between Tehran and Damascus.

In a joint press conference with his Syrian counterpart Hammoudeh Sabbagh in Damascus on Wednesday, Qalibaf underlined that endorsement of a comprehensive trade agreement between Iran and Syria would help broaden relations between the two countries.

“Comprehensive trade and economic agreement between Iran and Syria will pave suitable way for better activity of the two countries’ public and private sectors in post-war era, rebuilding Syria and taking advantage of trade interests between the two countries,” Qalibaf said.

“I take this opportunity to express my heartfelt congratulation for the success of Syrian people for participating in the elections and their special emphasis on safeguarding and stabilizing Syrian land and territory,” he added.