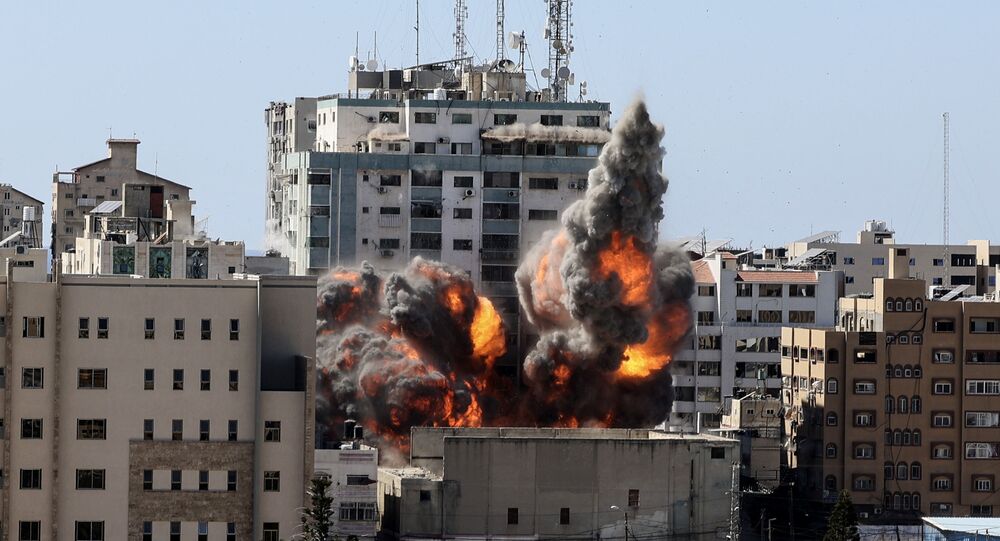 Unemployment in Gaza was already more than 50%, but that is likely to get even worse. According to a new report, Israel’s bombing of the Gaza Strip last month didn’t just target alleged members of Hamas, it also targeted the territory’s already-fragile economy.

When the Israeli Defense Forces bombed and shelled Gaza from May 10 to May 21, they launched more than 1,500 projectiles and destroyed more than 2,000 homes, damaging another 17,000, according to Gaza officials. The bombing killed more than 250 people, including 67 children.

However, they also destroyed commercial buildings like shops, farms, restaurants, and factories. According to a Wednesday report published by Electronic Intifada, Israeli bombing destroyed more than 500 enterprises, including 50 factories.

An industrial area established in 1996 by the US Agency for International Development (USAID) and the European Union was targeted repeatedly during the strikes, having never been previously attacked. Jaoudat estimated losses in the industrial estate alone were $20-25 million. The site employed 1,500 people.

“Once we learned that the industrial area was being bombed, we called the civil defense to fight the fires. When they arrived, they were targeted, too. Shells were falling right where they worked, which led to more fires and even more damage,” Bajess Jaoudat of the Palestinian Industrial Estate and Free Zone Authority told Electronic Intifada.

Some other institutions hit by bombing included more than 20 media offices, including al-Jalaa tower, which housed the offices of several international news agencies, including Al Jazeera and the Associated Press. Israel said it bombed the building because it was supposedly being used by Hamas.

Before the war, unemployment was already more than 50% and at times reached more than 80% in Gaza, which has been almost totally cut off from the world since 2006 by an Israeli and Egyptian cordon. More than 2 million people live in Gaza, half of whom are children. Many goods are not allowed to enter or leave, even those used for construction, and food and fuel are rationed by Israeli authorities, only allowing a few hours of electricity each day.

“The bombing of commercial areas is aimed solely at bringing the people in Gaza to their knees and to continue the siege,” said Adib Zineldeen, a shop owner in Al-Rimal district, which was heavily targeted by Israeli bombing. “They targeted the wealthiest residential and commercial areas, which provide livelihoods to thousands of Palestinians in Gaza, who were already making the bare minimum.”

In the wake of the bombing campaign, the US offered as much as $75 million for development and economic assistance to the Palestnians, but pledged that none of it would benefit Hamas, which rules the Gaza Strip and which Israel and the US regard as a terrorist organization. In response, Hamas said it would not accept a cent of international aid and would not allow the offer to divide the Palestinian people.

Solidarity efforts by other Muslim nations, such as Qatar and Iran, have been welcomed. Even before the May campaign, Doha had pledged $360 million in aid to Gaza in January. However, last week, Qatari Assistant Minister Lolwah Al-Khater, a spokesperson for the foreign ministry, said Doha had pledged another $500 million for rebuilding and repairing more than 45,000 damaged homes in Gaza, most of which remain unfixed from past bombing campaigns by the Israelis.

So far, Israel has not allowed any of this aid to enter Gaza, and Hamas has pledged that if the aid isn’t released by the end of the week, it will resume rocket attacks on Israel.

During the 11-day war, Hamas fired more than 4,300 rockets into Israel, most of which were intercepted by Israel’s Iron Dome air defense system. However, 13 Israelis, two of whom were children, were killed by the bombardment and more than 200 were injured.

Hamas called the operation “Sword of Jerusalem,” having fired them in response to a number of events targeting Palestinians in Jerusalem, including the imminent eviction of several Palestinian families from the neighborhood of Sheikh Jarrah after Israeli settlers won a court case, and Israeli police storming Al-Aqsa Mosque during prayers on the last Friday of Ramadan, injuring more than 300 worshippers and 17 police officers.