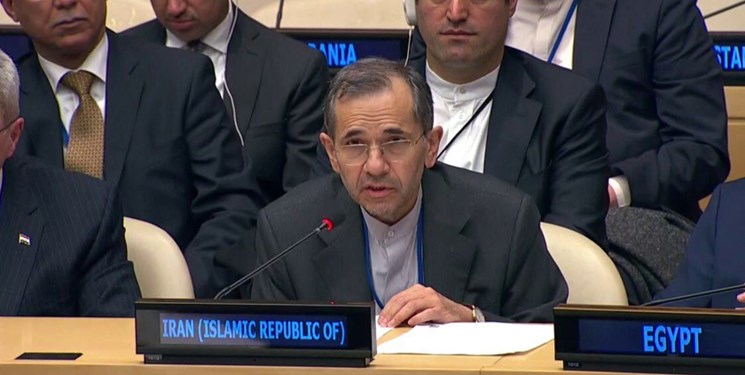 TEHRAN (FNA)- Iran’s Ambassador and Permanent Representative to the UN Majid Takht Ravanchi called on the international community to ensure full, effective and non-discriminatory implementation of the Chemical Weapons Convention, and said that the Tel Aviv regime must be forced to accept and implement the convention.

Takht Ravanchi made the remarks during a speech at the UN Security Council meeting on chemical weapons in Syria on Thursday.

“Politically-biased approaches and ratifications undermined the authority and credibility of the Chemical Weapons Convention,” the Iranian ambassador said.

He stronly criticized some countries’ abuse of the Chemical Weapons Convention and their political exploitation of the convention to further their national goals, and said that this is one of the challenges ahead of multilateralism.

Criticizing the technical and legal basis of the recent decision of the conference Organization for the Prohibition of Chemical Weapons (OPCW) member states on Syria and referring to the political goals of Western countries in this regard, he called the decision biased and inconsistent with the provisions and objectives of the convention, which would bring about adverse consequences on disarmament and non-proliferation of chemical weapons.

Takht Ravanchi pointed to the fact that Iran was the biggest victim of chemical weapons and condemned the use of them by anyone, anywhere and under any circumstances.

In relevant remarks in mid-April, Takht Ravanchi in a statement underlined his country’s demand for annihilation of all Weapons of Mass Destruction (WMD) in the world, describing it as the only guarantee for not using them.

In a statement read at an informal meeting of the UNSC on April 16, Takht Ravanchi stressed that the only “absolute guarantee” against the use of the WMD is to eliminate them all and to ensure that they will never be developed, a “noble objective” that clearly demonstrates the “inherent value” of non-proliferation and disarmament regimes.

“Nevertheless, the authority of such regimes and the credibility of relevant international institutions have seriously been challenged and undermined in the past decades, ironically in most cases, not by those seeking to develop WMDs but by those who have abused non-proliferation regimes to advance their own interests,” he added.

Iran’s permanent envoy to the UN pointed to some examples that prove the dual approach adopted by the Western member states of the UNSC regarding the WMD and non-proliferation and disarmament regimes.

Takht Ravanchi said the UNSC was “dead silent” when Iraq’s former dictator, Saddam Hussain, killed thousands of Iranian and Iraqi citizens by using chemical weapons during the Iran–Iraq War in the 1980s.

“It was the case when Iraq was invaded by Western countries based on completely false WMD-related claims. The Council is again silent when Syria has been under extreme pressure in recent years because certain powers are abusing the Chemical Weapons Convention (CWC) and the Organization for the Prohibition of Chemical Weapons (OPCW) to advance their illegitimate interests in that country,” he added.

Takht Ravanchi also said Iran, likewise, was put under unprecedented UN sanctions until 2016 just because certain Western powers, under the so-called proliferation concerns, accused Iran of seeking nuclear weapons, while Tehran has repeatedly said that it only pursues a peaceful nuclear program.

Nevertheless, Israel, which has already developed all types of WMDs and refused to join international treaties prohibiting such deadly weapons, is not held accountable by the UNSC since it is shielded by the United States, he further said.

“We also strongly reject all efforts undermining the CWC’s authority and the OPCW’s credibility and call for the balanced, full, and non-discriminatory implementation of the CWC and upholding the authority of the OPCW,” Takht Ravanchi concluded.