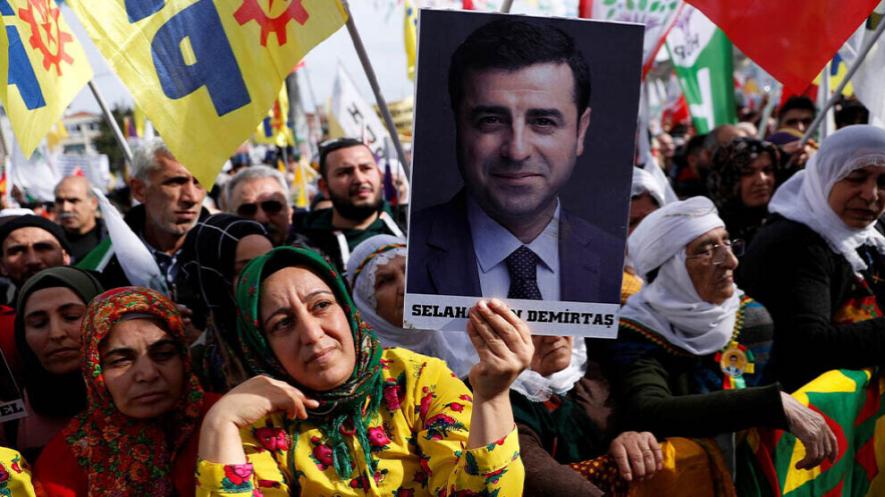 HDP politician Selahattin Demirtaş has been sentenced to three and a half years in prison for “insulting the president”. Photo: ANF

Significant developments are underway in Turkey. Most ominously, the government of President Recep Tayyip Erdoğan of the Justice and Development Party (AKP) has moved toward the banning of one of the country’s main opposition parties, the Peoples’ Democratic Party (HDP).

Erdoğan says that the HDP is not a legitimate political party, but merely the offshoot of the outlawed Kurdish Workers’ Party (PKK). Bekir Şahin, the chief public prosecutor of the Supreme Court of Appeals, echoed this view, arguing that the HDP “was acting together with the PKK terrorist organization and affiliated organizations.” But in 2019, as an example of its independence, the HDP broke with PKK leader Abdullah Öcalan on the Istanbul municipal elections.

One of the co-leaders of the HDP—Selahattin Demirtaş—has been in prison since November 2016. He is charged with instructing pro-PKK groups toward the 2014 protests over the ISIS invasion of Kobanî in Syria; protests across Turkey led to the death of 53 people. Demirtaş, who remains in prison, has not been tried or convicted despite a ruling by the European Court of Human Rights for his release. His party is now in danger of being banned.

Each year in March, Kurds across the Middle East celebrate the Nowruz or New Year festival. This year, across Turkey, Kurdish communities burned their Nowruz fires and celebrated the new year. Everywhere the mood was similar: people felt angry that the health of the Kurdish leader Öcalan—imprisoned in solitary confinement since 1999—has deteriorated and that the Turkish state is attempting to ban the HDP. In Diyarbakir, HDP co-leader Mithat Sancar said with defiance, “As long as the Nowruz fire is burning, nobody can make us kneel.”

What is happening to the HDP now is a recurrent feature of Turkish politics since the republic was established in 1923. Kurds, who make up almost 20 percent of the Turkish population, have struggled to get their political voice heard in the country. The PKK (formed in 1978) went into an armed struggle in 1984, thereby ceding the political space to other Kurdish forces. Over the past several decades, Kurdish political groups and the Turkish left have worked together in a range of alliances to widen democracy in the country; each of these attempts has been shut down. In 1990, the political left and the Kurds came together to form the People’s Labor Party (HEP), which was then banned in 1993. Out of HEP came the Freedom and Democracy Party (ÖZDEP), which only lasted four months. Then came the Democracy Party (DEP, 1993-1994), the People’s Democracy Party (HADEP, 1994-2003), and the Democratic People’s Party (DEHAP, 1997-2005).

The streams of the Turkish left and the Kurdish emancipatory currents came together in 2012 to form the HDP. Unlike its predecessors, the HDP aspired to be, and acted like, a truly inclusive rather than purely ethnically based political movement. Initially, the HDP and the government worked together to grant Kurds social and political rights in exchange for the transition to a presidential system. The process stalled (or was perhaps sabotaged). Erdoğan has supported the negotiations, then denounced them.

Everything came to a head in 2016, after Demirtaş was accused of praising Öcalan in a March 2016 Nowruz address. Not long after that, in May 2016, the parliament voted to strip HDP members of immunity, and in November of that year, the police arrested nine HDP leaders, including Demirtaş and the other party co-chair Figen Yüksekdağ. Two years later, the Turkish state arrested Yüksekdağ’s successor as party leader, Serpil Kemalbay, in February 2018, and by March 2018, 11,000 HDP members were reported to have been arrested. The current attempt to ban the HDP is part of this long-standing attempt of the Turkish state to delegitimize both Kurdish political forces and the political opposition.

A Bed Inside Parliament

On March 17, the Turkish parliament stripped HDP lawmaker Ömer Faruk Gergerlioğlu, a medical doctor, of immunity from prosecution and revoked his parliamentary status; this revocation is the first step toward imprisonment. The immediate reason was that Gergerlioğlu had shared content on Twitter in 2016 that the government said was tantamount to support for terrorism (it was actually a news story, which remains accessible on the news site T24, about how the PKK in northern Iraq had called for a peace process). In 2018, for the 2016 tweet, Gergerlioğlu was convicted, which he appealed. He recently publicized violations of human rights in Turkey, which could send him to prison for two to six years.

Gergerlioğlu refused to buckle. He said that he had been elected by the people of Kocaeli, east of Istanbul, and he would be guided only by their will. Gergerlioğlu moved into the HDP offices inside parliament, where he slept until Sunday, March 21, when the police entered the building and arrested him on his way to the morning prayers.

The extreme right-wing leader Devlet Bahçeli of the fascist Nationalist Action Party (MHP), whose parliamentary support is essential to keep Erdoğan in power, tweeted that when Gergerlioğlu slept in parliament, he left “a black stain on democracy.” Bahçeli called Gergerlioğlu a “dirty person” and urged his removal both from the parliament and from high office.

Erdoğan faces an economy in tatters, a foreign policy in shambles, and a splintering AKP. The alliance between the AKP and the MHP seeks to maintain power by breaking up the parliamentary opposition.

Frustration with the economy in Turkey led Erdoğan to fire central bank governor Naci Ağbal, the third person in this post to be removed in two years. Turkey’s economy continues to show modest growth, but its currency—the lira—has been struck by inflationary pressure. Ağbal and his predecessors had kept interest rates high to control inflation; this is something that his successor—Şahap Kavcıoğlu—said he would reverse. Kavcıoğlu is a close ally of Erdoğan, whose theory that high interest rates are the cause of inflation has long raised eyebrows. Following Kavcıoğlu’s appointment, the Turkish lira lost 15 percent of its value when the Asian markets first opened, eventually stabilizing around a loss of 9.5 percent. Without parliamentary scrutiny, the central bank will become more of an appendage of the presidency.

Finally, in the midst of all this chaos, Erdoğan withdrew his country from the Istanbul Convention, a 2011 Council of Europe treaty for the prevention of violence against women. Many speculate that it has to do with pressure from traditionalist and extreme right groups that are the base of his support.

Anger, dismay and confusion reign among those in Turkey who see Erdoğan’s actions as the slow destruction of Turkey’s modest democratic gains. If the HDP is banned and its parliamentarians are deprived from holding on to their seats, the only way the plans of the government alliance can be stopped will be an extremely improbable act of defiance on the part of the official opposition. Only if the Republican People’s Party (CHP) and the Good Party (IP), the official opposition along with the HDP, walk out of the parliament, the three of them holding a combined total of 226 seats in the 600-seat parliament, will there be a deep embarrassment to Erdoğan.

Vijay Prashad is an Indian historian, editor and journalist. He is a writing fellow and chief correspondent at Globetrotter. He is the chief editor of LeftWord Books and the director of Tricontinental: Institute for Social Research. He is a senior non-resident fellow at Chongyang Institute for Financial Studies, Renmin University of China. He has written more than 20 books, including The Darker Nations and The Poorer Nations. His latest book is Washington Bullets, with an introduction by Evo Morales Ayma.

E. Ahmet Tonak is an economist who works at Tricontinental: Institute for Social Research. He is the co-editor or author of several books, including Marxism and Classes, From Right to the City to the Uprising, and Turkey in Transition.

This article was produced by Globetrotter.