The British ambassador to Lebanon is ‘very exited’ to hand off some useless, half armored patrol vehicles to the Lebanese army:

Very excited to witness the arrival in Beirut of 100 armoured patrol vehicles, a donation from 🇬🇧 to @LebarmyOfficial. This is a great practical example of the 🇬🇧🇱🇧 partnership, and of our longstanding support for the LAF's vital role in keeping the Syria border safe and secure. pic.twitter.com/ZUjazx4xkd

Keeping the Syrian border safe and secure is certainly not a British priority. Let’s not forget that it was Britain which hired various companies, led by ‘former’ British intelligence officers, who then organized and ran the propaganda campaigns for the Jihadi onslaught on Syria.

The same companies were hired to secretly create ‘civil society’ groups in Lebanon that were then used to demonstrate for ‘regime change’ and to pressure the Lebanese government. It was also Her Majesties Government which hired such intelligence cutouts to embed into and undermine Lebanon’s justice and security services.

Lebanon’s army was another target of British intelligence efforts to gain control over Lebanon’s policies.

‘Anonymous’ hackers have recovered and published a third batch of documents which show how Britain infiltrated Lebanon’s Armed Forces Military Intelligence Department. Other documents show that Britain supplied spying equipment to the intelligence services it had infiltrated. Another secret program was designed to infiltrate Palestinian refugee camps in Lebanon and to manipulate Palestinian youths.

For all this the British government is using company cutouts. A government’s Terms of Reference document for the penetration of Lebanon’s military intelligence describes how the vendor is supposed to proceed. The ‘excuse’ is to provide training and support for counter terrorism (emphasis added):

The objective of [British Embassy Beirut] is to increase the capacity, capability and Human Rights compliance of the LAF and Military Tribunal within the CT arrest to trial process. A compliant pathway through the Lebanese CT system is sought that could be used by UK law enforcement in the case of terrorism cases with UK links in Lebanon.Requirement

An external supplier is required to deliver a two year programme on behalf of the British Embassy Beirut working primarily with the Lebanese Armed Forces Department of Military Intelligence, but with scope to engage with a broader range of security services here, to develop their investigative processes and evidential standards.

Working primarily via a embedded CT adviser, the successful supplier will also be expected to demonstrate a broad range of areas of expertise available on call down as necessary, to effectively project manage the programme while reporting into BE Beirut, and to demonstrate that they have built in rigorous and independent M&E processes throughout the programming timeline.

The British government offered £600,000 for the two year project which ran from July 2018 to March 2020 but has been extended to 2022. Importantly the ‘supplier’ had been told to keep the project secret:

CONFIDENTIALITY AND PUBLICITYThe implementer is not permitted to speak publicly (to the media, companies unrelated to any HMG audits or at conferences) about their work without the explicit permission of HMG.

Torchlight, a British company that was involved in previous spying projects in Lebanon and elsewhere, made a bid for the contract. It delivered a number of documents that describe its plans, people and methodology for the project. Here is how it plans to gain access to the Department of Military Intelligence (emphasis added):

Gaining Access to Premises / Organisations. The intricate and complex political and sectarian affiliations and loyalties of the primary security agencies makes them ‘courteous but cautious’ and reserved hosts, both between agencies and external partners. Each organisation exists within a silo, with little evidence of inter or intra-agency coordination. Within the GSD, for example, investigative processes appear to operate under a strict need-to-know basis which, from our observations, seems to stifle internal partnership working and information sharing. We will astutely and sensitively navigate these complexities during the first deployment to further build trust and assurances around our ongoing and persistent presence in their facilities while respecting the sensitivities of the work involved. Since no formal process exists for securing access to LAF DMI facilities, our Mentor worked hard during the initial phase of this programme to develop and leverage trusted personal relationships to successfully secure clearance and admittance through stringent security checks. Based on this experience, and the robust and enduring nature of the relationships we have established, we are entirely confident of being able to secure ongoing access and office space within the LAF DMI compound for the duration of the programme. This will be further enabled by engaging senior LAF DMI leadership at the outset of the project, ensuring their buy-in to the programme, highlighting how the approach and strategic objectives are fully aligned with their own vision of change as articulated to us during a meeting in March.

A bit of social engineering (and maybe an occasional bribe) and whoops a British government agent has security clearance and sufficient access to freely roam inside Lebanon’s military intelligence service.

As a follow on project to the above infiltration a Investigations and Digital Evidence Assistance (IDEA) program for Lebanon, Maldives, and Morocco was to be implemented. This would give Britain access to ‘counter terrorism’ data acquired and held by the intelligence services in those countries. It was again Torchlight which made an offer. As part of this it submitted its methodology for the project. From this we can glean that Torchlight will deliver hard and software that the intelligence agencies it has infiltrated will then use to sniff on phones and internet data.

Torchlight is equipment agnostic— we will only recommend equipment options that fit the solution. All potential suppliers undergo rigorous due diligence checks to ensure that we mitigate any risks that may affect delivery of outputs and outcomes. We maintain strong relationships with a wide variety of forensic equipment suppliers so that we can select the right solution for the requirement, and these established relationships also allow us to negotiate discounts, which we will pass on to the Authority to achieve VfM. For example, our market relationships and buying power recently enabled us to include a 10% discount for the purchase of digital forensic software to the British Embassy Amman. We will give due consideration to end user technical capability levels, maintenance requirements and fiscal sustainment needs (e.g. ongoing costs for licences, maintenance, software updates, patches etc) to ensure the equipment will continue to be used in a self‐sustaining manner independent of project support and be supported into the future. This is particularly critical because digital device technology is continuously advancing, and criminal actors are quick to adopt new technology solutions — law enforcement must therefore be equipped with a solution which can keep pace with these advances.

When Torchlight, working for the British government, provides equipment to other intelligence services one must assume that there will be backdoors built in which will give the British GCHQ and other Five-Eyes spy services direct access to it.

So far we have seen that the British government infiltrated Lebanon’s civil society, its security services and courts as well as its army intelligence.

An even more sensitive environment in Lebanon are the Palestinian refugee camps. As pretext to infiltrate these HMG asked for offers for a secret counter-ISIS (DAESH) propaganda campaign.

This program had extraordinary secrecy requirements: 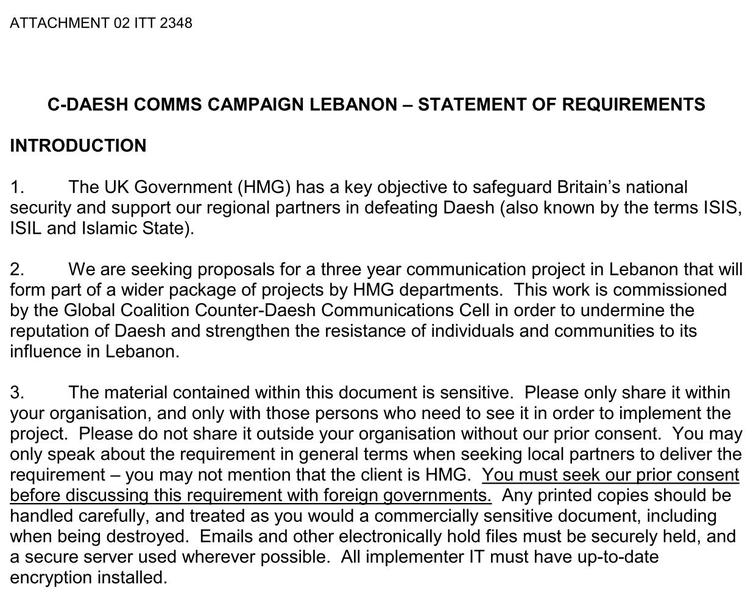 One wonders why a program to counter ISIS would require such secrecy. But the need becomes obvious when one looks at who its target is.

Torchlight’s bid for the project includes a Duty of Care statement:

Around 53% of the Palestinian refugees in Lebanon (around 450,000) live in the 12 recognised refugee camps. The ongoing conflict in Syria has forced many Palestinian refugees from that country to flee to Lebanon in search of safety. Most Palestinian militancy in Lebanon is confined to these camps.
…
Torchlight maintains strong connections into LAF Intelligence – who are officially mandated to administer and police the camps – through our own ongoing security programmes in Lebanon, as well as through the local NGOs with which we are partnering on this project, which operate in all 12 of the PRCs and have excellent relationships with both the LAF and the various militias that have a presence in the camps and have existing access permits in place. We also maintain strong networks within the international NGO community, including with Field Security Officers at UNRWA. While in the camps, we will ensure our project team are accompanied by local NGO staff who are familiar with the camp, its people and protocols, at all times. We are acutely aware of the potential threats of violent backlash towards beneficiaries as a result of perceptions around this programme, and have appropriately mitigated these in the design as described Sections 1.2.1 and 1.5.1.

Section 1.2.1 names seven local NGO’s as partners for the project. The devised method for the project is to influence youth in the camps through various workshops and courses without letting them know that the program is part of a British anti-ISIS campaign. Section 1.5.1 is the Risk Assessment. It notes:

This programme will not be overtly branded as a CVE/C-Daesh programme and at no stage will we disclose HMG involvement in this programme.

The secret project, budgeted with £1.5 million, was to be led by Alicia Kearns, a public relation figure who previously worked for the British Ministry of Defense and the Foreign and Commonwealth Office. There she was the top cheerleader for the ‘moderate’ Jihadis who attacked Syria: Her CV notes:

All the British programs described in this series are designed to help the British government to achieve British aims. Britain is not creating loud youth groups demanding ‘regime change’ on Beirut’s streets for the benefit of Lebanon. It does not infiltrate Lebanon’s justice, security and military intelligence services out of pure generosity. When it secretly abuses NGO’s to indoctrinate Palestinian youth it does not have the Palestinian’s wellbeing in mind.

The money spent on all these secret infiltration programs is a multiple of the money spent to deliver those 100 useless patrol cars.

The described projects are dangerous for Lebanon and all its inhabitants. They open the country to extensive British spying and to manipulation from the inside.

The people of Lebanon should demand that their government end all such programs.