During the last weeks there was news that Turkey was hiring some 2,000 ‘Syrian rebels’ to fight in Azerbaijan against Armenian forces which since 1993 occupy Nagorno- Karabakh. Earlier today the Azerbaijan forces and the mercenaries launched their attack on Armenian lines. It was a massacre. Two Azerbaijani helicopters were shot down. Some 10 tanks and armored troop transporters went up in flames. Azerbaijani artillery hit some civilian structures in Stepankert, the capital of Nagorno-Karabakh. Turkish(?) drones hit Armenia front positions. 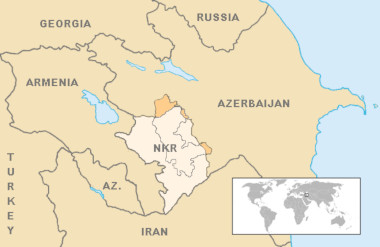 biggerThe Azerbaijani tactic seems to be to bunch up a lot of their tanks in the open field and to wait for the Armenian artillery to destroy them. Russian troops are stationed in Armenia and additional heavy support from Russia was flown in today. But Russia is friendly with both countries and is already urging for an armistice. Armenia has mobilized its forces and reinforcements are moving towards the front.

This is now, after Syrian and Libya, the third country in which the wannabe Sultan of Turkey is trying to fight Russian supported forces. It ain’t gonna work. But Erdogan has to keep on doing that as a domestic diversion because the Turkish economy has screeched to a halt. The recent central bank rate hike is unlikely to stop the loss of the Lira but will deepen the recession.

The situation might well escalated from here on. There will be a lot of disinformation coming from both sides.