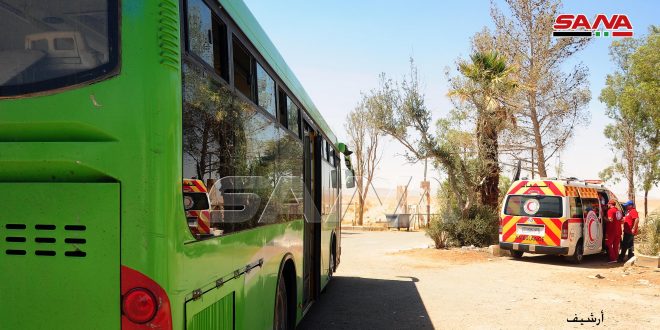 Today, a number of displaced people who detained in the besieged Rukban Camp by American occupation forces in Al-Tanf area on the Syrian-Iraqi border managed to reach the Syrian Arab Army’s control areas.

The returnees will be transferred to temporary residence centers after conducting the necessary medical examinations and to ensure that none of them have  infectious diseases, including the Coronavirus, so that they can later be transferred to their home areas liberated from terrorism.

Last April authorities ordered members of an armed group from the so-called “Revolutionary Commanding Army”, which operates under the supervision of the American occupation forces, to leave the city of Palmyra and hand over their equipment, weapons, and machinery to the Syrian Arab Army.

American forces and their mercenaries from the terrorist groups in the Al-Rukban camp are holding thousands of displaced Syrians, as they live in difficult humanitarian conditions and suffer food shortages as American forces blackmail them and steal humanitarian aid.