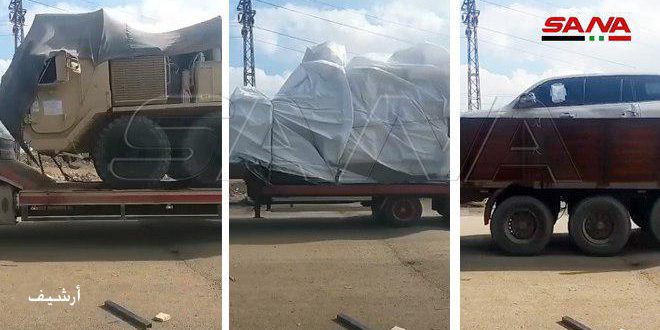 The US occupation forces have continued their violations of the international laws through bringing a convoy of vehicles laden with military equipment and logistic materials from Iraq to the Syrian territories as they headed for their illegitimate bases east of al-Houl district in Hasaka countryside.

Civil sources told SANA reporter that the American occupation forces brought 5 vehicles through the illegitimate (al-Tawqaji) crossing east of al-Houl district, and from there they headed to oil wells located in the area, where they photographed a number of plants, including the plant of al-Faj village, pointing out that the vehicles went to the southern countryside of Hasaka province, particularly to al-Gibsa Gas Plant, east of al-Shadadi.

In the same context, the sources indicated that vehicles belonging to the US occupation forces entered into a group of oil and gas plants in the eastern countryside of al-Shadadi and they photographed them completely including the plants of (Kbaibeh, Ghouna and Huwaizieh).

They indicated that these measures come in completion of the process of stealing the Syrian oil and depriving the Syrian citizens of it and fighting them economically and imposing unjust siege on them.