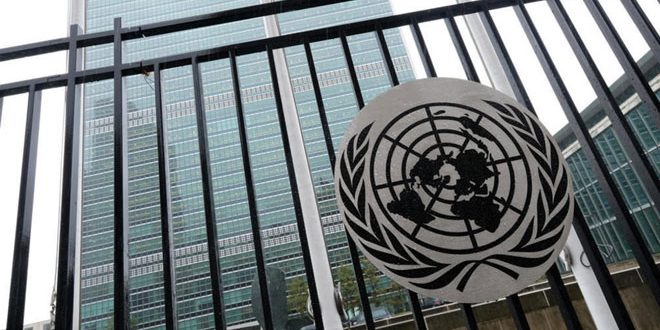 The permanent representatives of eight countries to the UN, among them Syria’s Permanent Representative, Bashar al-Jaafari, called for lifting the coercive unilateral measures, indicating that these measures constitute a challenge in facing the crisis caused by the spread of Coronavirus epidemic.

This came in a joint letter addressed by the representatives of Russia, China, Iran, Venezuela, Nicaragua, Democratic People’s Republic of Korea, in addition to Syria, on behalf of their Foreign Ministers, to the UN Secretary-General Antonio Guterres with the aim of putting an end to those illegitimate measures and guaranteeing equality and coordination among countries of the world in facing the challenges caused by the outbreak of the Virus.

The letter pointed out to the challenges facing the countries affected by the coercive unilateral measures in confronting the global health crisis caused by the Coronavirus epidemic.

It called on UN Secretary General to take into consideration the need of countries of the world to ensure the basic infrastructure and equipment needed by the health sectors for providing health tests and treatment, food and services to everyone without any exception.

The Permanent Representatives reminded the UN Secretary-General of the content of his recent appeals and statements in this regard, in which he stressed the need more than ever for solidarity, hope and political will to overcome this crisis together, affirming that to achieve that goals, this requires from all countries to act in a collective, coordinated and decisive manner as responsible members of the international community because facing this danger is a joint responsibility.

They also underlined that governments of countries, affected by the economic blockade, possess the political and moral will to move towards facing of this danger, yet this time requires the highest level of world’s solidarity, cooperation, and support.

The letter reviewed the negative effects of unilateral coercive measures both at the national level and outside the regional borders, as these measures impede the ability of national governments to work with international organizations and benefit from the international financial system and the system of free trade and thus undermine the ongoing efforts of governments to combat the Corona virus.

The permanent representatives of the eight countries, on behalf of their governments, urged the UN Secretary-General to demand immediate and complete lifting of such illegal, coercive and arbitrary measures which illegally adopt the weapon of economic pressure, stressing the importance that his stance, in this regard, should be harmonious with the UN long-term and principled stance which rejects imposing the coercive, unilateral measures on peoples.