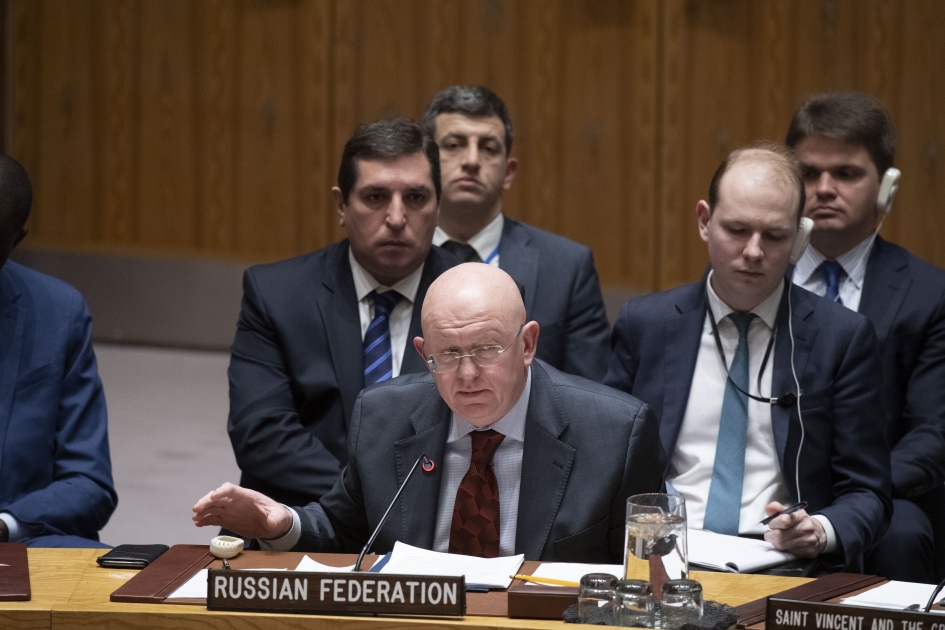 We closely followed the briefing by Under-Secretary-General Mark Lowcock; however, apparently, he did not have time to listen either to us or to Syria. It is a pity. We believe it would make sense to listen to what we have to say. I hope colleagues will convey what we say to him.

Despite the fact that stabilization has become a steady trend at the major territory of Syria, peaceful life has started to get back to the country, the social and economic infrastructure is restoring, there still remain hotbeds of tension, and the population needs humanitarian assistance. In this regard we point out active partaking of UN specialized bodies, the ICRC, the SARC, and non-governmental organizations in providing assistance to the population in coordination with the Syrian authorities.

The situation remains worrisome at the territories that are out of control of the Syrian government – in Idlib, in the East bank of the Euphrates, and in the ‘Al-Tanf’ zone.

Early in January, the Russian and Turkish military made yet another attempt to establish ceasefire in Idlib. However, radical groups under ‘Hayat Tahrir al-Sham’ that has been recognized as terrorist, again ignored that and continued firing at the positions of the Syrian troops and adjacent human settlements, in the first place – Aleppo. The density of attacks reaches up to 60 incidents a day. This month alone, such armed provocations have taken dozens of lives and entailed injuries for hundreds of civilians. This cannot go unretaliated. Syrian governmental forces have to react to terrorist raids, therefore they carry out limited operations to neutralize terrorist activity and mitigate threats that are coming from Idlib.

Today we heard statements that almost copied one another: about bombardments of schools, hospitals, marketplaces, places of IDP gatherings. We were cited exact figures of how many died and were wounded. We already heard that before. Word-to-word. Let me ask you once again: Where from do you get your verified data? Where did you find that many medical facilities that had been bombed? You were speaking of dozens, if not say hundreds such facilities in Idlib alone. Escalation in Idlib is not caused by operations of Syria’s armed forces. It is caused by constant deliberate provocations by terrorists. Starting from 13 January three humanitarian corridors have been functioning to help peaceful population leave the de-escalation zone. Those who have no permanent place of residence can be received in temporary accommodation facilities in Hama province. Unfortunately, terrorists continue to use people as a “human shield”, keep civilians hostages, prevent them from exiting, and fire at crossing points. This is yet another point that proves our position that we articulated earlier: the problem of Idlib cannot be resolved as long as those whom the Security Council has recognized as terrorists are running those territories.

The situation in the Euphrates region has improved, in no small part due to the implementation of the Turkish-Russian Memorandum dated 22 October. Now Turkish-Russian patrols monitor the agreed sections of the border. Besides, the Russian military make energetic efforts to restore the devastated infrastructure, provide medical assistance to those who need it, deliver food and basic necessity items.

The direst problem is the humanitarian situation in the biggest refugee and IDP camps that are situated at the U.S.- controlled territories: “Rukban” in the South and “Al-Hawl” in the North-East. Implementation of the UN evacuation plan for the remaining inhabitants of the camp was due five months ago, but has been postponed ever since because militants refuse to guarantee safety of UN personnel. The problem of “Rukban” cannot be solved through humanitarian convoys alone, it is even more so, because assistance often fails to reach the refugees and ends up in the hands of militants. It is important that we continue and finalize efforts to resettle the camp.

Today USG Lowcock gave a poor assessment to cross-line assistance. However, let me remind that a lion’s share of assistance in Syria is provided through this mechanism, including assistance for the province Al-Hasakah in the North-East. All humanitarian UN agencies, apart from WHO, deliver assistance to the North-East from the territory of Syria.

Let me also address effects of adoption of resolution 2504. The effects are that this resolution is both explicit and implicit. It steers the United Nations towards search for solutions and cooperation with the legitimate government of Syria according to resolution 4682, as should be the case under the international law. Instead of inflaming passions, the UNOCHA should rather hurry to establish effective cooperation with the legitimate authorities in Damascus. This is what meets the interests of the UN and us all.

We expect the UN report for the month of February to provide information about alternative routes of humanitarian deliveries to Syria. As we said, alternatives to “Al Yarubiyah” and delivering humanitarian assistance to “Al-Hasakah” really exist. We would like to be briefed about the steps taken at this track and the results that have been achieved.

Now to statistics which is known to be a stubborn thing. 1 million people in Idlib are covered by the cross-border mechanism, 9-10 million more are covered by regular humanitarian programs. It is what the recent report of the Secretary-General says. I am saying this to respond to the words that the Syrian government allegedly does not cooperate with the UN. The number of humanitarian convoys that are agreed with Damascus is growing month-to-month. Representatives of the UNOCHA cited this statistics at the meeting of the Humanitarian Task Force in Geneva.

We agree with those who said today that the humanitarian topic is over-politicized. This is also true for the post-conflict recovery. Some of our colleagues boast that they manage to politicize this issue by putting forward ever-increasing requirements to the Syrian authorities.

We call upon the global community to join projects for post-conflict recovery of Syria and lift unilateral sanctions in order to normalize the life of Syrians. Of course, if you are truly interested in the country’s well-being.

Permanent Mission of the Russian Federation to the United Nations