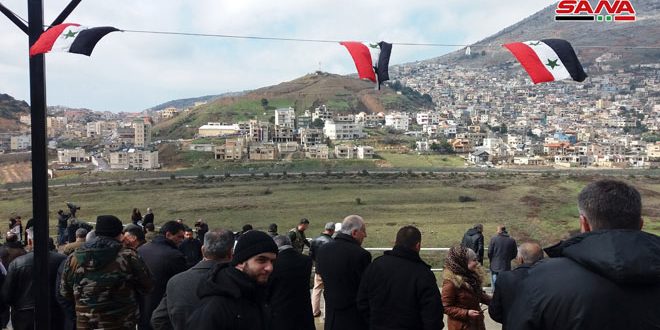 Thirty eight years after the notorious Israeli decision of annexing the occupied Syrian Arab Golan, our people in occupied Golan have been steadfast in confronting the Israeli decisions and aggressive measures.

The Syrian people in general and the people of Golan, in particular, remember these days the Israeli ill-famed decision to annex Golan which was issued by the occupation authorities on December 14, 1981.

The people in the occupied Syrian Golan have stressed their adherence to their motherland, Syria and their Syrian Arab identity considering this decision as null and void.

The sinister Israeli decision was inseparable from the repressive measures adopted by the occupation authorities against Golan and its people.

The Israeli authorities also besieged and isolated the villages of Mas’ada, Majdal Shams, Buq’atha, Eyn Qaniya and al-Ghajar and prevented people of these villages from continuity with their motherland, Syria.

In response to the Israeli decision, the people of Golan issued the National Document on March 25th in which they affirmed that “the occupied Golan is part and parcel of Syria and the Syrian Arab nationality cannot be dismantled from the people of Golan.”

The Golan people’s resistance of the notorious decision has been ceaseless. It was first manifested in a six-month strike declared on February 14, 1982 that caused the paralysis of all activities in the occupied Golan. In parallel of the open strike, massive demonstrations were staged in protest of this racist decision.

The occupation authorities escalated their oppressive measures against people in the Golan including a wide-scale arrest campaign of men, women and the elderly, cutting off electricity and water and prevented food supplies for more than forty days.

Despite the Israeli savage practices and atrocious crimes, the resistance of our people in occupied Golan continued unabated offering hundreds of martyrs who paid their lives for the sake of liberating their lands.

On December 17, 1981 the UN Security Council issued a resolution considering the Israeli decision as null and void and stressing the Syrian Arab identity of the occupied Golan.

On December 3, 2019, the UN General Assembly reiterated demands for Israel to fully withdraw from the occupied Syrian Golan until June 4th, 1967 in implementation of the relevant UN Security Council. 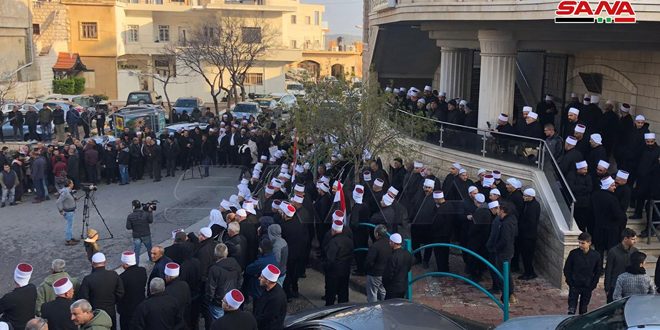 Arbitrary measures, racist and oppressive practices of the Israeli occupation entity against our people in the occupied Syrian Golan increased their firmness, resistance and rejection of the decisions and procedures of the occupier, and made them more adhered than ever to motherland and Syrian identity.

On the thirty-eighth anniversary of the notorious Israeli decision of annexing the occupied Syrian Arab Golan, Syrians in the occupied Golan once again express adherence to the homeland and the Syrian identity.

They renewed determination to confront the occupier until freedom and liberation of the occupied land are obtained, insisting on foiling all the Israeli entity schemes, the last of which was holding elections for the so-called “local councils” in occupied Syrian Golan and aggressive policies and attempts to loot their lands inherited by their parents and grandparents.

Speaking by phone to SANA office in Quneitra province, a number of citizens of the occupied Syrian Golan expressed their absolute confidence in the Syrian Arab Army and its ability to liberate the occupied land and the return of the Golan to Syrian national sovereignty.

The liberated detainee Sulaiman al-Maqt, affirmed that the sons of the Golan from the early days of the Israeli occupation, confronted its hostile measures and sacrificed to preserve the Syrian Arab identity of the occupied Golan.

In turn, Hassan Fakhreddin expressed the Golanese determination to continue their struggle, emphasizing that all Israeli practices and schemes are doomed to failure including the project of setting up the wind turbines with the aim of stealing lands.

Atef Shaalan stressed that anniversary of the ill-famed decision to annex Golan is an occasion to renew loyalty and belonging to the motherland, pointing out that the occupation’s practices are null and void.

On the liberated side, Head of Quneitra Province Council, Shehata Marai, affirmed that the occupied Syrian Golan is an integral part of Syria, and all procedures of Judaization are illegal and inconsistent with international treaties, covenants and the resolutions of the UN Security Council and the General Assembly in this regard.

Member of the People’s Assembly, Rifaat Al-Hussein, saluted the steadfastness of our people in the Golan, stressing Syria’s insistence on liberating the whole occupied lands.

Sheikh Radwan Al-Tahan said that the Golan is the land of the ancestors and we will return to it one day.

The Israeli ill-famed decision to annex Golan was issued by the occupation authorities on December 14, 1981.

On December 17, 1981 the UN Security Council issued a resolution considering the Israeli decision as null and void, stressing the Syrian Arab identity of the occupied Golan.