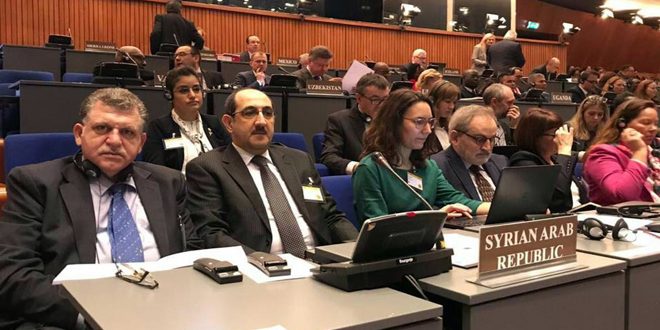 Syria expressed deep concern over contents of correspondences of a member of the fact-finding mission to Office of the Director General of the Organization for the Prohibition of Chemical Weapons (OPCW) recently leaked, which unveil that the OPCW report misrepresented some of the facts on the alleged Douma chemical attack in Damascus countryside.

Syria’s Permanent Representative to the OPCW Bassam Sabbagh underlined that the alleged use of chemical weapons in Douma was used as a pretext for the United States, France and Britain to launch their tripartite military aggression on Syrian territories.

Sabbagh, during discussions of the 24th conference of the States Parties to the Chemical Weapons Convention currently held in the Huge, emphasized that these three western countries are now trying to put pressure for the blackout on the leaked document and strongly defending the credibility of the report to justify its aggression.

Ambassador Sabbagh called on the organization to hold a hearing and a discussion session with all members of the fact-finding mission who participated in the investigation on alleged Douma chemical attack so that states parties could discuss all views as stipulated in Article 62 of the Verification Annex of the Chemical Weapons Convention (CWC).

He called on the organization to exercise the utmost transparency and neutrality in its work, stressing that whoever will hinder holding this session is afraid of its results and of exposing the practices of distortion of the Douma incident report which was fabricated.

The Syrian request was supported by a number of countries, namely Russia, China, Iran, Venezuela, Belarus and Nicaragua.

The British Daily Mail newspaper revealed earlier that a leaked e-mail indicated that the (OPCW) manipulated a report on an alleged chemical attack in Douma in Damascus countryside in April 2018 to accuse the Syrian Arab Army of doing that to justify the tripartite US-British-French attack on Syria at that time.

On November 23, the British daily unveiled in a report that a scientist employed by the OPCW says in a leaked e-mail that investigations on the ground at Douma have produced no hard evidence that the alleged gas attack took place, reiterating that facts were deliberately hidden in the reports of the Organization.