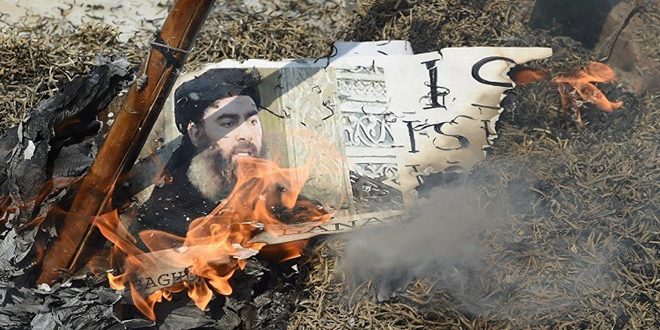 A US official, speaking on condition of anonymity, told the American Newsweek Magazine that the US military has conducted a special operations raid on Saturday targeting Abu Bakr al-Baghdadi, leader of Daesh (ISIS) terrorist organization, without confirming if the operation was successful.

The official said that the operation was conducted in Idleb province, northwest of Syria, by US Special Forces after receiving certain intelligence information.

This declaration bring to the minds the operation through which the US administration killed leader of al-Qaeda terrorist organization Osama Bin Laden who had been used by the US in Afghanistan, and when his mission finished, the US killed him burying the secrets of his relation with Washington with him.

The US TV networks of (CNN) and (ABC) said earlier this morning that al-Baghdadi is more likely to be killed in a US raid in Idleb area.

The CNN mentioned that the US army is conducting tests to verify the death of al-Baghdadi officially, while one of the US media outlets quoted several governmental sources as saying that al-Baghdadi might have killed himself with a suicide vest after the US Special Forces attacked him.

Whether al-Baghdadi was killed in Idleb City or not raises a big question about the bodies and the states which have backed and protected him over all the past period, on top the Turkish regime which defends the terrorist groups in Idleb in all possible ways and which has been trying to protect them throughout the past years.

Many media outlets have mentioned that the Former US Secretary of State Hillary Clinton has admitted in her memoirs that a number of Western states including the US are the responsible ones for establishing and funding Daesh (ISIS) terrorist organization and supplying it with weapons and different forms of support.

In case the story of killing al-Baghdadi is confirmed, many questions will be also raised on the goal behind the operation, particularly after the role of the US in supporting the terrorist organizations throughout many chapters of the terrorist war on Syria has become well-known, on top supporting Daesh terrorists in the face of the Syrian Arab Army.

The killing of al-Baghdadi at the hands of the US forces doesn’t mean that the US hasn’t participated in creating terrorist organizations to undermine the stability of some states or in supporting terrorism in Syria.

Damascus, SANA- After using him for long years as a terrorist tool in Syria and Iraq, US President Donald Trump on Sunday announced the liquidation of Abu Bakr al-Baghdadi, leader of Daesh (ISIS) terrorist organization, who had been operated by the US intelligence, in an indication of the end of his role as the secrets of his relation with Washington had been buried with him.

Trump’s declaration on Sunday on the death of al-Baghdadi with whom a large number of his allies were killed in a US military operation in the Syrian province of Idleb after receiving previous information on his presence in the targeted place, comes in line with the previous operations conducted by the US in different parts of the world to liquidate leaders of terrorists who are subordinate to it and who have committed obnoxious crimes according to its dictations.

What Washington tries to gain through announcing the death of terrorist al-Baghdadi doesn’t mean that it combats terrorism, but it means that al-Baghdadi’s role has finished according to it.

The liquidation of al-Baghdadi brings to the minds a similar operation through which Washington got rid of leader of al-Qaeda terrorist organization, Osama bin Laden in 2011 whom it had used in Afghanistan, and it killed him later after the end of his role to bury the secrets of the interrelationship between al-Qaeda and Washington, and that was also what happened with one of al-Qaeda leaders Abu Musab al-Zarqawi.

Several US media outlets have more than once referred to the fact that Daesh (ISIS) terrorist organization has been created by the US and the West, and according to some US media, former US Secretary of State Hillary Clinton admitted in her memoirs few years ago that a number of Western states including the US are the responsible ones for establishing and funding Daesh terrorist organization and supplying it with weapons and all forms of support.

The process of creating leaders for terrorists such as bin Laden, al-Zarqawi, al-Baghdadi and others or creating the terrorist organizations has appeared in Syria over the past eight years as the terrorist organizations have been created under different names such as “Jabhat al-Nusra”, “Hurras Eddin”, “Ahrar al-Sham” and other names falls under the specialization of the US and Western intelligence which create, fund and support such organizations to justify what Washington is doing of wars and military interference against the states which don’t serve its interests.

The liquidation of al-Baghdadi affirms the link among terrorist organizations regardless of their names as al-Baghdadi was found in an area which is under the control of his enemy terrorist Abu Mohammad al-Julani, leader of “Jabhat al-Nusra” terrorist organization which proves that there is a direct link and coordination among these terrorist tools and the bodies which support them, on top the US and the Turkish regime which has created the terrorist groups in Idleb and which has protected them over the past years.

The liquidation of a terrorist tool such al-Baghdadi doesn’t mean that Washington isn’t involved in establishing terrorist organizations in Syria and the region with the aim of undermining stability and achieving geopolitical and economic goals as the role of the US and its intelligence agencies in supporting, funding and training terrorists in Syria has been documented and well-known since the beginning of the terrorist war on Syria.

In parallel with establishing camps for training terrorists who it has called “Moderate Opposition” and supplying them with different types of weapons, the US administration has committed many crimes against the Syrian people and the infrastructure in framework of the illegitimate “International Coalition” which was announced in 2014 under the pretext of fighting Daesh and later it become clear that it is the first supporter and defender of this extremist organization.

Many acts and evidences have proven the huge coordination between the US-led Coalition and Daesh terrorist organization as the US interference reached the stage of the direct interference to save the lives of Daesh terrorists and to enable them to establish control over new areas including the accident of the attack launched by the illegitimate coalition on one of the posts of the Syrian Arab Army in al-Tharda Mountain in Deir Ezzor in Sep. 2016, in addition to transporting leaders of the terrorist organization aboard US aircrafts from the battles to save their lives or to supply them with intelligence information.

Washington is trying to complete its colonial role in Syria and the region whether on the political or the military levels through its forces which are stealing the Syrian oil and this is what was affirmed by the Russian Defense Ministry on Saturday as it published photos showing convoys of tank trucks while they were smuggling oil outside Syria under the guard of US military servicemen and private military companies .

The liquidation of al-Baghdadi will not be an indication on the end of the US interference in the region, but it refers to the beginning of a new stage for achieving other ambitions, even if this will entail creating new terrorism under a different name.