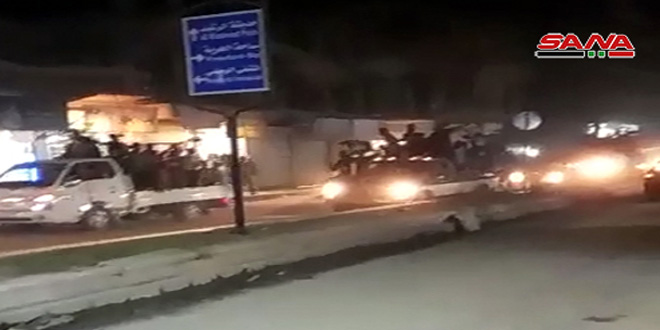 People in Raqqa city took to streets on Tuesday to welcome the arrival of the Syrian Arab Army to protect al-Jazira region from crimes of Erdogan’s mercenaries.

They participants, organizing gatherings and marches in all neighborhoods of Raqqa, carried the Syrian national flag and banners condemning the Turkish aggression and calling for unity and rallying around the Syrian Arab Army to protect the area and defeat the Turkish occupation forces and their mercenaries of terrorist organizations.

They affirmed that Erdogan’s schemes are doomed to fail due to steadfastness and determination of the army to liberate every inch of the homeland from terrorism and the occupiers.

Earlier, Qamishli and Hasaka cities witnessed popular rallies celebrating the arrival of army units to defend the homeland and face the Turkish occupation.