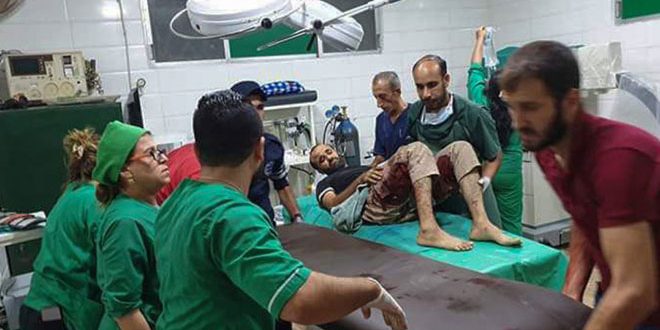 Iran on Thursday called upon the Turkish regime to immediately stop its aggression on the Syrian territories and to pull out its troops from Syria.

Iranian Foreign Ministry said in a statement “We express concern over the Turkish military action inside the Syrian territories and by taking into consideration the humanitarian situation and the dangers threatening civilians in the areas of military confrontations, we affirm the necessity of the immediate stopping of attacks and pulling out the Turkish forces from the Syrian territories.”

The Foreign Ministry reiterated that this aggression will cause a large-scale material and humanitarian damage.

The Ministry added that tension and problems between Syria and turkey will not be resolved except by peaceful means and through respecting Syria’s national sovereignty and territorial integrity as well as the implementation of Adana Agreement.

Al-Ahram Gate Website quoted Ambassador Bassam Radi, Spokesperson of Egyptian presidency, as saying that al-Sisi, during talks held with King of Jordan, Abdullah II, warned against negative repercussions of the aggression on Syria’s regional security and the political process in the country.

King Abdullah II, for his part, stressed his country’s rejection of any threat against Syria’s unity.

Chinese Foreign Ministry Spokesperson Geng Shuang said in a press conference that his country has always believed that Syria’s sovereignty, independence, and territorial integrity must be respected, therefore the international community must avoid adding new complications to the situation.

He said that all sides are concerned about the possible ramifications of the Turkish aggression, calling on all relevant sides in the international community to work towards encouraging a political solution for the crisis in Syria.

In the same context, Belgium and Italy condemned Turkish aggression on the Syrian territories, calling upon the regime of Recep Tayyip Erdogan to immediately stop the aggression.

Reuters quoted Italian Foreign Minister Luigi Di Maio as saying on sidelines of a conference in the capital city of Rome, “We think as a government that the Turkish aggression isn’t acceptable, and we condemn it as the military action in the past always caused more terrorism.”

Di Maio continued “We call for the immediate halt of this unacceptable campaign as they use of force threatens the lives of the Syrian people who have suffered from a real tragedy over the past years.”

Belgian Foreign Minister Didier Reynders, for his part, affirmed that the Turkish aggression against the Syrian territories will lead to negative consequences and will pose a threat to the progress achieved in combating Daesh terrorist organization.

Reynders underlined the necessity of avoiding any new humanitarian crisis in Syria.

He noted that his country, as a nonpermanent member at the International Security Council will effectively contribute to the debate which will be organized in New York on Thursday on this issue. Reynders affirmed that this Turkish aggression threats to undermine the diplomatic efforts which are exerted for solving the crisis in Syria.

Czech Foreign Minister Tomas Petricek condemned the Turkish aggression against the Syrian territories, calling for immediately stopping it and warning that it would deteriorate the situations in the region.

Minister Tomas called upon the European Union (EU) and the other powers to exert pressure on the Turkish regime to stop its aggression, saying “securing the Turkish borders should be done in other way rather than the aggression.”

Czech Defense Minister Lubomír Metnar called upon the Turkish regime to stop its aggression and to adopt the diplomacy to reach solutions to the problems.

Jordan calls on Turkey to stop its aggression against Syria immediately

Jordanian Foreign Ministry condemned the Turkish aggression of the Syrian lands, calling for immediately stopping it.

Minister al-Safadi expressed his country’s rejection of any attack against Syria’s sovereignty, condemning to any aggression against its territorial integrity.

Al-Safadi reiterated that the political solution is the only solution to the crisis in Syria which would preserve its unity and allow it to eradicate terrorism and its danger.

Meanwhile, Canada condemned the aggression launched by the army of the Turkish regime on the Syrian lands, considering that it endangers stability in the region and risks the efforts exerted for eliminating Daesh (ISIS) terrorist organization.

“We call for the protection of civilians, and we call on all parties to respect their obligations under international law,” Freeland added.

In the same context, Armenia condemned the Turkish aggression on the Syrian territories, affirming necessity of preserving Syria’s sovereignty and territorial integrity.

The Armenian Foreign Ministry said in a statement on Thursday that “The Turkish military operation creates a direct danger and many violations of human rights.”

The statement indicated that the aggression “will lead to a humanitarian catastrophe and the displacement of large numbers of civilians.”

The Ministry asserted the necessity of preserving Syria’s sovereignty and territorial integrity, calling for exerting “effective international efforts” to stop the aggression.

Meanwhile, the Prime Minister of Armenia Nikol Pashinyan condemned the Turkish aggression, calling on the international community to take action to stop these illegal actions.

EU Foreign Policy Chief Federica Mogherini called on the Turkish regime to immediately stop its aggression on the Syrian lands, stressing the EU commitment to Syria’s territorial integrity and safety.

Mogherini said on Wednesday in front of the EU Parliament that the Turkish offensive hinders the political solution to the crisis in Syria and it will increase the suffering of civilians and cause more displacement.

The EU official indicated that the Turkish aggression provides an suitable platform to Daesh (ISIS) terrorist organization which still poses a big threat to the international, regional and European security.

Egyptian Foreign Minister Sameh Shoukry renewed his country’s condemnation of the Turkish aggression on the Syrian lands, describing it as “a blatant violation” of the international law.

In a statement to the Egyptian TV. on Thursday, Shoukry said that the Turkish offensive on Syria has no justification, and it is considered as a flagrant violation of the Syrian sovereignty and a clear and blatant breach of the international legitimacy resolutions and the international law.

He pointed out that his country has repeatedly warned against the Turkish expansionist aggressive behavior against Syria, reiterating that the Turkish regime should review its stance in light of the wide international condemnation of this aggression.

Australia expressed concern over the Turkish aggression on the Syrian lands, stressing that this aggression destabilize the region and provides suitable conditions for Daesh (ISIS) terrorist organization in the region.

AP News Agency quoted the Australian Prime Minister Scott Morrison as saying that the behavior of the Turkish government rises a deep concern, indicating that launching this aggression by the Turkish regime creates a state of instability in northeastern Syria.

Prime Minister of Finland Antti Rinne, whose country currently chairs the European Union, said in a statement that Finland denounces the Turkish military operation against Syria, calling for its immediate cessation.

Rinne said these actions escalate the crisis in Syria, voicing deep concern over their ramifications on the humanitarian situation as hostilities could lead to more displacement, adding that the Finnish government will stop licensing the export of new weapons to Turkey.

The Iraqi Foreign Ministry issued a statement saying the Turkish aggression will cause more complications for the situation in Syria and will displace large numbers of civilians, increasing humanitarian siffering.

The UAE Foreign Ministry said in a statement that the Turkish aggression is a serious development and an unacceptable, blatant transgression against the sovereignty of an Arab country, which violates international law and constitutes blatant interference in Arab affairs.

Cuban ambassador in Damascus Miguel Porto Parga condemned on Thursday the Turkish regime aggression on Syria, saying that his country condemns any aggression which targets sovereignty, independence and territorial integrity of Syria.

“The US uses the policy of economic blockade against peoples of Syria, Cuba and Venezuela, who reject policies of hegemony, in order to create economic crises that cause a decrease in medicine and food in these states as a pressures to change their policies,” Parga said at a press statement on the 151 anniversary of the start of resilience to get independence against Spanish colonization.

He described as deep and strong the relations between Syria and Cuba as the two countries share stances of support and confront one enemy, pointing out to the popular rejection of the US policies in the two states.