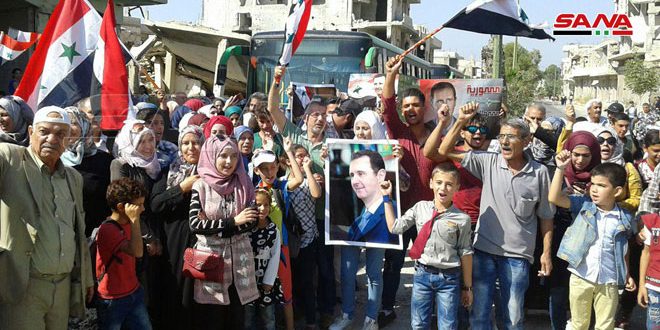 Hundreds of displaced families on Wednesday returned to their homes in al-Qusair town in Homs west-southern countryside after rehabilitating the houses and the service institution in the town in the framework of efforts exerted by the government to facilitate the return of the displaced to their areas which had been liberated from terrorism by the army.

SANA’s reporter said that 1800 persons headed back to al-Qusair town after the infrastructure and services , including electricity , water, and sanitation had been rehabilitated to ensure appropriate accommodation for the locals there.

The reporter indicated that nearly 2000 persons are scheduled to return to their houses in al-Qusair town on Thursday.

Speaking to SANA, Head of al-Qusair ‘s City Council Abdul Kafi al- Khatib said that al-Qusair witnessed today the return of the second batch of its locals , noting that the number of returnees has reached 3600.

On July 7th, the first batch of tens of displaced families returned to their houses in al-Qusair town.